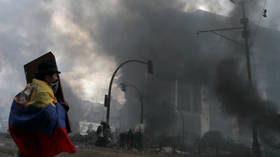 Ecuador’s President Lenin Moreno has declared a curfew and sent in troops to force protesters off the streets of the capital Quito. He also agreed to assess the cancellation of fuel subsidies that had triggered the unrest.

Moreno has announced that he’s introducing a curfew and the “militarization” of Quito, starting at 8 pm GMT on Saturday. “This will facilitate the use of public force in the face of intolerable excess of violence,” he said on Twitter. Ecuador’s armed forces also announced late on Saturday that movement around the country would be restricted for 24 hours.

Due to “the complexity of the situation,” Moreno will take another look at Decree 883, which has enraged citizens, Quito Mayor Jorge Yunda Machado announced on Twitter.

The move was one of the austerity measures introduced by the government in order to meet the conditions of a $4.2 billion loan deal with the International Monetary Fund (IMF). Moreno later said that he would assess the impact of the cuts, but didn’t indicate whether he was planning to repeal it.

The president also offered to begin talks with protest leaders to settle the crisis, and they have accepted his invitation.

One of the conditions was that the talks be held in public and be broadcast live. “We’re not going to talk behind closed doors. It has to be with the Ecuadorian people,” one of the protest leaders said.

Footage from Quito on Saturday resembled a war zone, with barricades, fires, and plumes of tear gas fired by the police at the raging crowds.

Live feed by RT’s video agency Ruptly showed thick smoke in the air and crowds of people rioting, as sounds of explosions rocked the streets.

The protesters, mainly represented by Ecuador’s indigenous people, set the Comptroller General’s Office on fire and ravaged the parliament building, breaking windows and throwing furniture into the street. The demonstrators also blocked all roads leading to Quito International Airport.

The administrative buildings taken over by the protesters were empty, as Moreno had already moved the government to the city of Guayaquil, located 250km southwest of Quito.

It was the capital’s 10th straight day of unrest, which broke out after the government announced austerity measures. The suspension of fuel subsidies saw the price of gasoline spike from $1.85 to $2.39 per gallon, while diesel prices went up by a staggering 123 percent – from $1.03 to $2.29.

Five people have been killed and over 1,000 wounded in clashes since October 3, according to government data. The police have arrested over 1,100 demonstrators.

Moreno was previously reluctant to reconsider the harsh measures, and blamed former president, Rafael Correa, and his Venezuelan ally Nicolas Maduro, of masterminding the demonstrations.