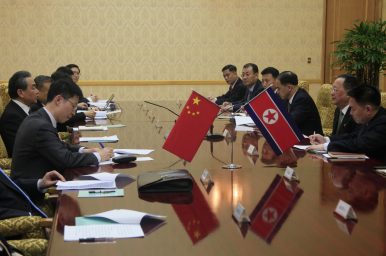 The world’s attention has been fixed upon the rapidly changing Korean Peninsula for months. As the critical moment that North Korean Supreme Leader Kim Jong-un to meet with the U.S. President Donald Trump is approaching, China has vowed to play a “constructive role” in resolving the Korean Peninsula issue.

Chinese Foreign Minister Wang Yi paid a visit to North Korea from May 2 to 3. He is the first Chinese foreign minister to visit the regime since 2007. Previously, China tended to rely more on the connections between the two ruling parties. As The Diplomat reported earlier, last November — when the North Korean crisis reached a boiling point —  China sent Song Tao, who holds the position of minister of the international liaison department of the Chinese Communist Party, to North Korea in the name of party-to-party liaison rather than country-to-country diplomacy.

At the regular press briefing on May 2, China’s foreign ministry spokesperson Hua Chunying explained that Wang’s current visit is “an important measure” for China and North Korea to “follow through on the consensus of the two state leaders and strengthen high-level exchange and strategic communication.”According to the Chinese foreign ministry, on May 2 Wang met with his North Korean counterpart Ri Yong-ho after landing in Pyongyang. During the meeting, Wang emphasized that China “fully supports” North Korea’s commitment to the denuclearization of the peninsula, the legitimate concerns of North Korea’s security, and the improving relations between the both Koreas.

Hua highlighted that China “has always stayed committed to realizing the denuclearization of the Peninsula.”

We hope to work with various parties to consolidate and carry on the positive momentum on the Peninsula and continue to make positive efforts and play a constructive role for the final settlement of the Peninsula issue.

China is indeed actively working with various parties now. Chinese Premier Li Keqiang is to visit Japan next week. On May 9, Li will have talks with Japanese Prime Minister Shinzo Abe and South Korea’s President Moon — the first trilateral talks between the countries since 2015. Beside the topics of trade and business, the Korean Peninsula issue is undoubtedly on the top of the agenda.

Also on May 2, a Blue House official told South Korean media that Seoul aims to keep U.S. troops stationed in South Korea even after a final peace treaty is signed between the two Koreas.

“The government’s position is that the U.S. Forces Korea (USFK) is playing the role of a mediator between major powers surrounding the country, such as China and Japan, ” the anonymous official said.

This position, if true, will undoubtedly influence China’s decisionmaking down the road.

On the specific issue, Hua, at the press briefing, didn’t provide a clear response but said that China “maintains that the temporary armistice mechanism should be replaced by a permanent peace regime on the Peninsula. We hope that all relevant parties should work together for this goal through dialogue and negotiation. ”