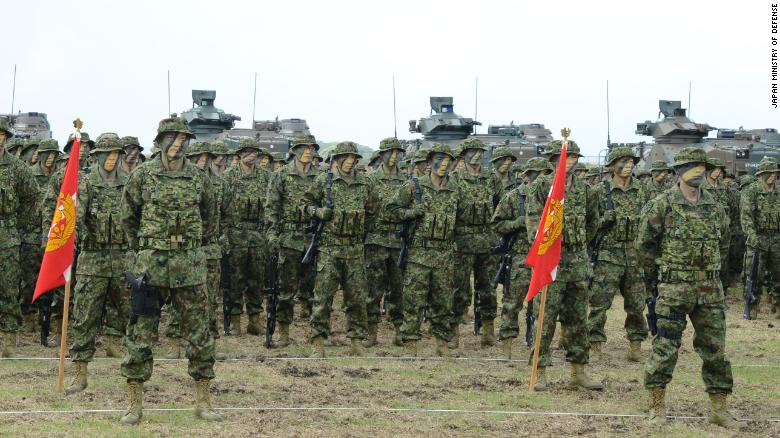 (CNN) The Chinese government has reacted warily to the establishment of a new Japanese amphibious special unit, designed to repel invasions on Japan’s remote islands.

Japan and China have a long history of territorial disputes over islands in the East China Sea, in particular a rocky, uninhabited island chain known as the Diaoyu Islands in Beijing and the Senkaku in Tokyo.

The Japanese Self Defense Force debuted their newly formed Amphibious Rapid Deployment Brigade (ARDB) on Saturday, at a military display near Sasebo, on the southwestern tip of Kyushu Island. 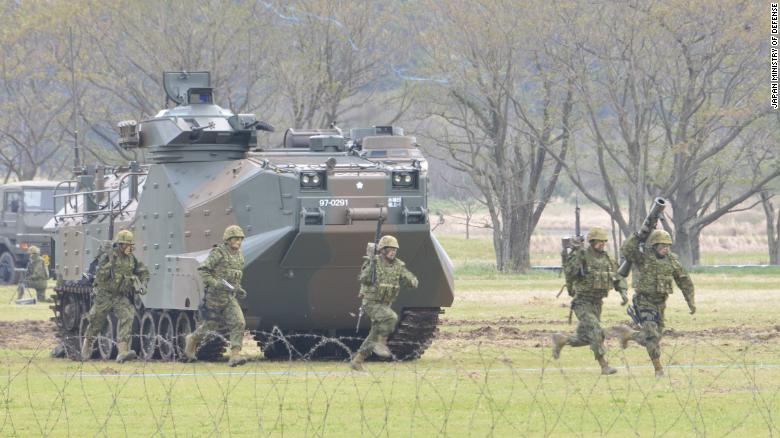 About 1,500 members of the new unit conducted a public exercise, camouflaged with khaki stripes, imitating recapturing a Japanese island from an invading army.

“Some question if the Japanese government may consider using safeguarding territorial integrity as an excuse to revive militarism, to which regional countries must stay on high alert,” the article said.

Tensions have regularly flared between China and Japan over the islands in the East China Sea, including in 2017 when three Chinese Coast Guard ships sailed near to the islands, sparking a diplomatic
war of words.

Relations between Beijing and Tokyo have been strained since the end of the Second World War, stemming from the Japan’s wartime occupation of mainland China.

The new Japanese unit was announced by Defense Minister Itsunori Onodera at the Ministry of Defense on March 31, who said it would be composed of about 2,100 personnel.

“In the event of an invasion of a remote island, its task will be promptly landing on the island and regaining and securing it,”

Onodera said at a press conference.

Split into two amphibious deployment regiments, the unit is equipped with amphibious vehicles and will continue training with US military forces, a Japan Self Defense Forces press release said. 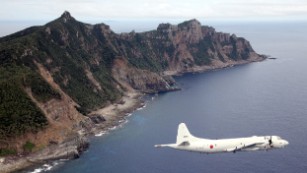 Defense Minister Onodera added the brigade would continue training with US-built military aircraft, the V-22 Ospreys, which can be used for long-range flights and take off and land like helicopters.

Japan’s naval forces also have ships well-suited to amphibious operations, including its helicopter destroyers, four of which have been commissioned in the past decade.

Those ships, which look a lot like a small aircraft carrier, could be configured to carry stealthy F-35B fighter jets, which can land vertically. They are also platforms that accommodate the V-22.

Despite the activation of the new unit and the hardware supporting it, Japan’s marines are far from being an effective fighting force, according to Grant Newsham, senior research fellow at the Japan Forum for Strategic Studies.

Newsham said in a blog post Japan must be able to integrate the marines with its air and naval forces.

“Amphibious operations are complex, effectively three-dimensional as they involve operations afloat, ashore, and in the air,” Newsham wrote on the Japan Forward website. If other branches can’t deliver and protect a landing force, it won’t accomplish its mission, he said.

The Chinese government has repeatedly said it would be prepared to defend the islands claimed by Beijing in the East China Sea if they were taken by force.

China resolutely defends its territorial sovereignty and any attempt to infringe upon China’s sovereignty over Diaoyu Islands will be futile,” Lu said according to Xinhua.

In May 2017, Abe said he wanted to have the constitution altered and a new version in place by 2020. “I strongly wish to make 2020 the year that the reborn Japan will make a new start,” he said at the time. 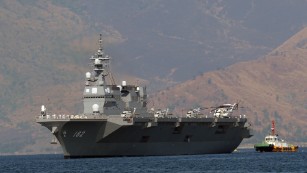 In recent years, aggressive actions by North Korean leader Kim Jong Un, including firing missiles over Japanese territory, have given Abe’s complaints about the constitution a sense of urgency.

Currently Japan has a military known as the Self-Defense Forces, but the constitution bars it from “the threat or use of force as means of settling international disputes.”

Despite the constitution and its restrictions, Japan maintains one of the strongest armed forces in the world, according to analysts.

But Japan’s military revival is controversial in the Asian region, particularly in China and South Korea, due to deep sensitivities about the country’s role in World War II.

Speaking on Monday, a rival to Abe inside his Liberal Democratic Party warned against a hurried push towards revising the constitution, saying the ruling party needed to consider “how we distribute our political energy,” according to local media.