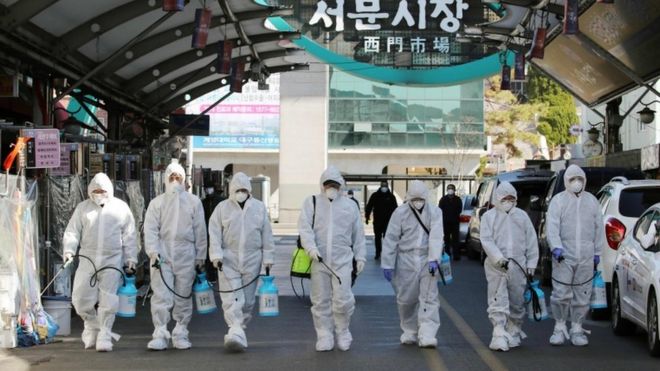 President Moon Jae-in said the country faced “a grave turning point”, and the next few days would be crucial in the battle to contain the outbreak.

Six people have died from the virus in South Korea and more than 600 have been infected.

Meanwhile, Italy and Iran have announced steps to try to contain worrying outbreaks of the virus.

In Italy, strict quarantine restrictions are in force in two northern “hotspot” regions close to Milan and Venice.

Around 50,000 people cannot enter or leave several towns in Veneto and Lombardy for the next two weeks without special permission. Even outside the zone, many businesses and schools have suspended activities, and sporting events have been canceled including several top-flight football matches.

Amid the growing restrictions, the last two days of the Venice Carnival, on Monday and Tuesday, were canceled.

Italy has seen two deaths and the number of confirmed cases has risen to more than 100 – 89 of them in Lombardy.

Iran’s outbreak of coronavirus has significantly worsened, with the death toll rising to eight on Sunday. The government has acknowledged 43 confirmed cases although officials have warned the virus may have spread to “all cities”.

Schools, universities and cultural centres across 14 Iranian provinces have been closed from Sunday.

The new strain of coronavirus, which originated last year in Hubei province in China, causes a respiratory disease called Covid-19. China has seen more than 76,000 infections and 2,442 deaths.

On Sunday, China’s President Xi Jinping described the outbreak as the “largest public health emergency” in the country’s recent history.

He acknowledged “shortcomings” in China’s response and said lessons must be learned.

The combined situation in South Korea, Iran, and Italy points to the early stages of pandemic. This means a global outbreak, with the coronavirus spreading in the community in multiple parts of the world.

In each of these countries, we are seeing the spread of the virus with no connection to China. The lockdown efforts in Italy mirror those that have happened in China.

The situation in Iran is especially worrying because the health authorities have reportedly said the virus has spread to multiple cities, and it appears the first case in Lebanon is linked to a traveller from Iran.

If we have a pandemic, it will still be important to limit the speed of the spread of the virus. If countries could hold it somewhat at bay until the end of winter, there is a hope that warmer temperatures will reduce the time the virus can survive in the air, as we see with seasonal flu. But this may not be certain.

On Sunday, health officials revealed a further leap in the number of coronavirus cases with a cluster of infections linked to a hospital and to a religious group near the south-eastern city of Daegu.

The sixth death was confirmed at the Daenam Hospital, in Cheongdo, which treats the elderly and people with mental health issues. The hospital has seen more than 110 people infected including nine medical staff.

As we pass Gumi, just north of Daegu, we get an emergency alert about #coronavirus cases nearby. It tells you where the person with the virus has been and at what time. Incredibly detailed. (This person was playing a Korean version of pool until 1.30am) 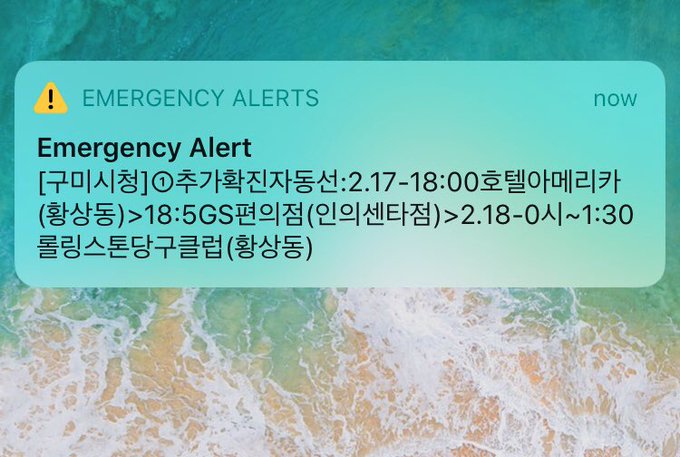 South Korea has seen the largest number of confirmed cases after China. An outbreak on the Diamond Princess cruise ship in Japan has also seen more than 600 cases.

“The next few days will be crucial. The government will raise the alert level to the highest level of ‘grave’ according to experts’ recommendations and drastically strengthen our response system.”

Of the 169 new cases announced in South Korea on Sunday, 95 of them are linked to a Christian sect in Daegu called the Shincheonji Church of Jesus, the Korea Centers for Disease Control and Prevention (KCDC) said. The total number of cases connected to the church stands at 329.

In a video statement, a church spokesman expressed “deep regret” that many of its followers and citizens of South Korea had been infected. The spokesman added that the church had advised about 250,000 members to minimize their outside contact and take precautions.

What is the Shincheonji? 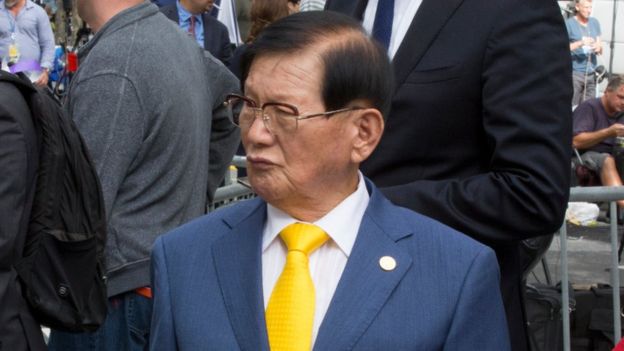 The head of the World Health Organization (WHO), Dr. Tedros Adhanom Ghebreyesus, has expressed concern at the number of new cases with no clear link to China or other confirmed cases.

In a briefing to the African Union on Saturday, he said the greatest concern now was countries with weaker health systems, particularly in Africa.

Dr. Tedros said the WHO was working with African governments to train thousands of health workers and to provide equipment to identify and treat infected people.

“Our biggest concern continues to be the potential for Covid-19 to spread in countries with weaker health systems,” he said. “We are working hard to prepare countries in Africa for the potential arrival of the virus.”

Dr. Tedros said some countries, such as the Democratic Republic of Congo, were using experience gained from testing for the Ebola virus to test for the new coronavirus.

“This is a great example of how investing in health systems can pay dividends for health security,” he added.