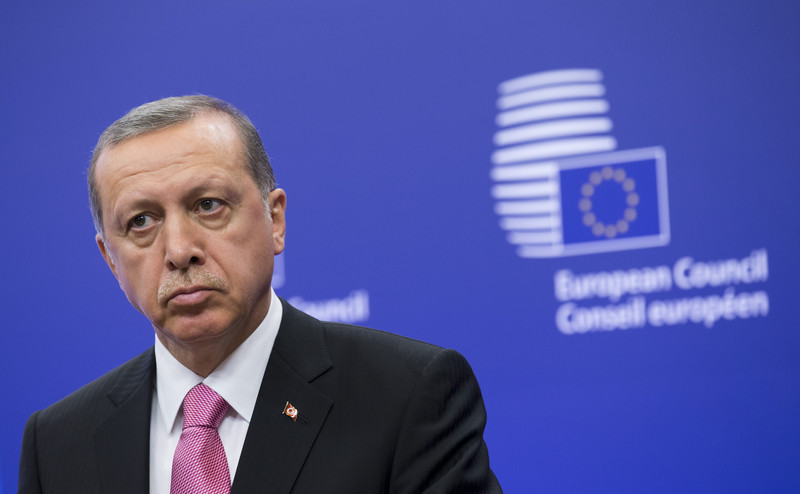 Turkey’s President Recep Tayyip Erdogan has once again used the millions of refugees hosted in the country as a bargaining chip against the European Union.

Speaking alongside Hungary’s prime minister Viktor Orban on Thursday (7 November), he told reporters the refugees will be allowed into Europe unless the EU provides more support.

“Whether we receive support or not, we will continue to aid the guests we are hosting. But, if this doesn’t work out, then we will have to open the doors,” he said.

Erdogan has in the past made similar statements, often seen as a means to squeeze leverage over a European Union that is intended to maintain a 2016 deal with Ankara to prevent people from landing on the Greek islands.

“In 13 minutes you can get across the stretch of sea between the Turkish coast and the islands on an inflatable boat,” said Michalis Chrisochoidis, Greece’s minister for citizens’ protection, earlier this week.

He said Turkey has an obligation to control the border to Europe and accept returns from the Greek islands.

The latest stand-off comes on the heels of Turkey’s 9 October invasion into north-east Syria, which has since displaced some 180,000 people in a stated aim to create a so-called “safe zone”.

Turkey wants to send Syrian refugees back into that zone amid evidence collected by Human Rights Watch, which says some are being forced against their will.

Relations between the EU and Turkey remain fraught following the de facto freezing of accession talks in June 2018.

“In the last couple of months, we saw a significant increase in irregular migration to the EU from Turkey. This time it is mainly Iranians, Afghanis, Pakistanis,” Maciej Popowski, a senior European Commission official, told MEPs earlier this week.

European commissioner for migration, Dimitris Avramopoulos, also last month in Ankara met Erdogan to discuss how to deal with these three nations’ citizens and ended up pledging an additional €50m to help the Turkish coast guard search and rescue.

The money comes on top of some €6bn of EU funds geared towards helping the 3.6 million Syrian refugees hosted by Turkey with projects running until the end of 2023.

Some 97 percent of the €6bn has already been programmed, says the commission.

Although some is given as direct grants to the Turkish ministries of education, health, and family and social affairs, the bulk is channeled through large international aid agencies.

The commission also says that none of it can be used outside Turkey, meaning at no point will it help fund the repatriation or the reintegration of Syrian refugees in the northeast of Syria.

“We are not going to support resettlements of forced evictions into north Syria or deportations whether it is from Turkey or Lebanon or any other country,” said Popowski.

Similar comments were made by Michael Koehler, another senior EU commission official.

“If ever there was a political decision to support the resettlement of Syrian refugees into Syria, the facility [€6bn] would not be the funding source because legally this is not allowed,” he said.

That political decision will weigh heavily on the United Nations whose secretary-general met with Erdogan in early November to discuss Turkey’s plan to resettle hundreds of thousands of Syrian refugees across the border.

The UN says any resettlement must by voluntary, safe and dignified.