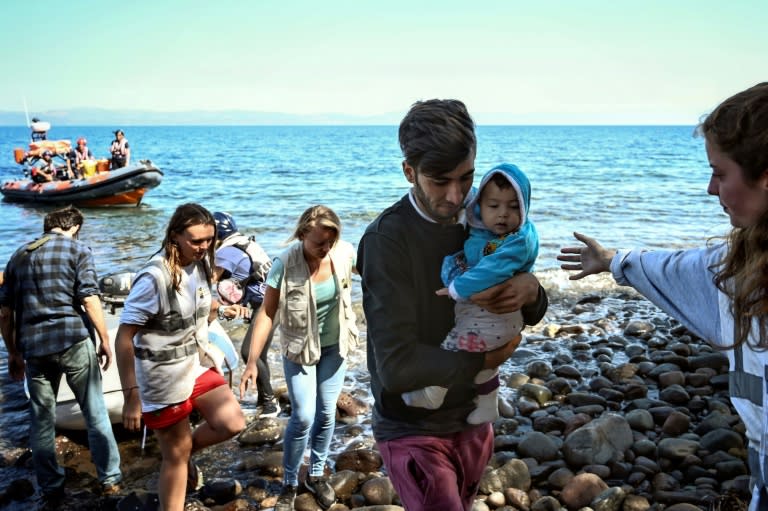 Around 60,000 migrants have risked the dangerous Mediterranean crossing so far this year (AFP Photo/ARIS MESSINIS)

Valletta (AFP) – Interior ministers from four EU countries meet Monday in Malta to try to work out an automatic system to determine which countries will welcome migrants rescued in the central Mediterranean.

The ministers from France, Germany, Italy, and Malta hope to end the long, drawn-out negotiations that have seen vulnerable asylum seekers including babies stranded at sea, sometimes for weeks.

They take place ahead of a European summit in October in Luxembourg.

The mooted automatic distribution system would only be a temporary solution until the current system, the “Dublin regulation”, can be revised.

Its critics have long argued that it places an unfair burden on the Mediterranean frontier countries Italy, Malta, Greece, and Spain.

Italy’s new, pro-EU government has moved quickly to turn the page on the hardline anti-migrant policies pursued by former far-right interior minister Matteo Salvini, who closed the ports to those rescued.

A successful European migrant agreement would be a blow to Salvini, showing that cooperation gets better results than confrontation.

Countries that did not volunteer to take migrants should face financial penalties, they argued.

In a sign of how things have changed over the last few weeks, Italy late Sunday authorized charity rescue vessel the Ocean Viking to disembark its 182 people rescued at sea in Messina, Sicily.

The Italian decision “puts an end to five days of unnecessary suffering,” said charities SOS Mediterranee and Doctors without Borders (MSF) which operate the ship.

“It is unacceptable that the people who have survived this very dangerous crossing… are stranded at sea for days and sometimes weeks before finding a Place of Safety,” the ship’s search and rescue coordinator Nicola Stalla said.

“It is urgent that a European agreement is found to put an end to these repeated stand-offs,” he said in a statement.

At an informal meeting of foreign and interior ministers in Paris in June, 15 countries agreed to the creation of a “European Solidarity Mechanism”.

But Hungary’s nationalist prime minister, Viktor Orban, rejected redistribution quotas in comments made during a visit to Rome on Saturday.

Monday’s meeting in Malta will try to decide where those rescued can be relocated — and whether that covers just those fleeing war and persecution, or economic migrants too.

France and Germany are reportedly willing to receive 25 percent of people plucked from vessels in the Mediterranean.

But they are not keen on Italy’s idea for migrants to be sent to countries across southern Europe on a rotation basis.

The number of migrants arriving in Europe via the Mediterranean has dropped sharply in recent years. The UN’s refugee body recorded nearly 115,000 arrivals in 2018, down from 170,000 in 2017 and over one million in 2015.

Malta’s Interior Minister Michael Farrugia on Sunday bemoaned the lack of European solidarity when it comes to migrants, despite having “supported one another when faced with harsh economic realities.

“If this doesn’t change, then I don’t see the migration issue being solved,” he told the Times of Malta. “Unfortunately, I see it becoming a divisive issue between member states in the years to come.”

European migration commissioner Dimitris Avramopoulos will also attend the Malta talks, as will Finland’s interior minister — as they hold the EU presidency.