JEREMY Hunt warned the European Union that failing to secure a Brexit deal with Britain will have “terrible consequences for the European project” ahead of his maiden speech as Foreign Secretary.

Jeremy Hunt warned the European Union they would risk facing “terrible consequences” if they failed to agree to a Brexit deal with Britain.

The Foreign Secretary suggested the bloc should unite the diverging feelings in their “heads and hearts” and agree to a mutually favourable agreement before the March 2019 deadline.

Speaking to the Today programme, Mr Hunt said: “In their hearts, they want to give Britain a good deal because they know how important we have been for the security and prosperity of Europe in the post-war period. But in their heads, they are worried that if they give us a good deal, other countries will follow suit.

“What I say to them is if you are thinking about this logically with your head as opposed as your heart then also recognise that the consequences of an acrimonious, messy divorce, would be terrible for the EU project as well.”

Mr Hunt, who is expected to give his maiden speech as Foreign Secretary on Tuesday, also said it would be a “geo-strategic” mistake for Brussels not to strike a new deal with the UK.

He pointed out the important role played by Britain in the aftermath of the Second World War to strengthen the defences of the European continent.

He continued: “I made it clear that I think Britain would survive, would prosper, whatever the outcome of these talks. But it would also be a geo-strategic mistake for the continent of Europe.

“I was in Latvia last week and 30 years ago Latvia was part of the Soviet Union. Now they are a modern European democracy, a member of the EU, a member of Nato. No country has done more to transform Europe over that period than the UK. 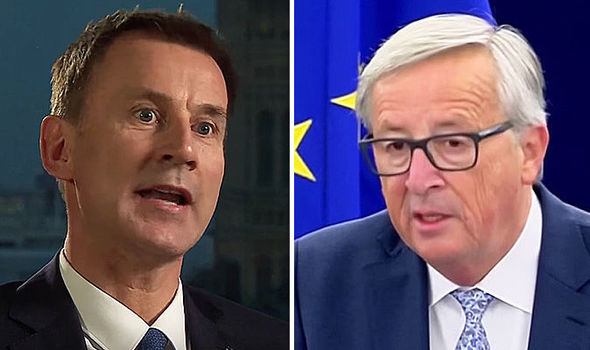 Brexit news: Jeremy Hunt warned a no deal would be “terrible for the EU project” (Image: BBC•EbS)

“That’s why I think it would be a terrible tragedy if we failed to recognise that Europe has prospered when the UK and continental Europe countries were friends and worked together.”

His intervention comes as ministers attempt to step up the pace of negotiations in the hope of hammering out a deal in time for an EU summit in Brussels in October.

Brexit Secretary Dominic Raab is expected to deliver a major speech on the negotiations later this week and the Government is scheduled to begin releasing a series of more than 80 technical documents setting out preparations needed in case the talks collapse without a deal.

He said: “We are working constructively and at full speed 24/7, seven days a week to reach an agreement. 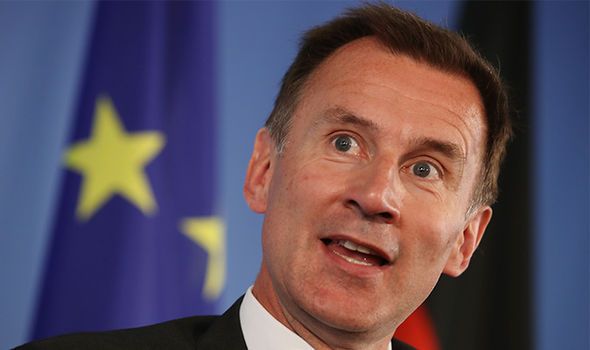 |
Jeremy Hunt warned the EU of the “geo-strategic mistake” of no deal (Image: GETTY)

“Our chief negotiator has been engaging constructively as he has always done with his British counterpart and it’s in that spirit that the meeting tomorrow will take place.”

A new Brexit-backing alliance of campaign groups and think tanks is being launched on Tuesday in a fresh attempt to force the Prime Minister into delivering a full break with Brussels.

The Brexit Advance Coalition will unite 10 organisations including several with close links to the Conservative Party.

Get Britain Out, the Bow Group and the Campaign for Conservative Democracy are among those backing a joint declaration of principles.

Supporters are planning a series of high-profile meetings and other campaign events over the coming months to raise the call for shift in Government policy towards a more decisive break with the EU than that promised by the Prime Minister’s Brexit plan agreed by ministers last month at her Chequers country retreat.