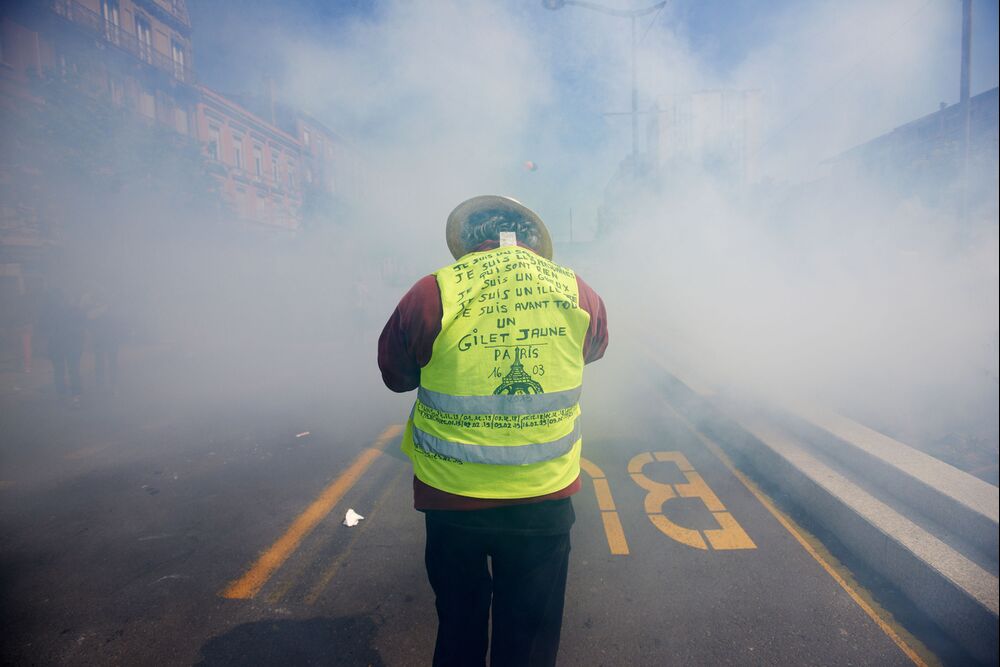 The French government is mobilizing 60,000 police nationwide after this week’s fire at the Notre-Dame Cathedral doesn’t seem to have deterred “Yellow Vests” from protesting for the 23rd straight Saturday.

Several key members of the disparate and eclectic movement have posted that they intend to demonstrate Saturday, saying that contesting President Emmanuel Macron’s policies isn’t incompatible with grieving over the damage to the iconic Gothic monument. Interior Minister Christophe Castaner has said there are indications that “Black Bloc” anarchists, who’ve been blamed for the worst of the violent acts in past weeks, are expected to join them.

“Violent extremists once again plan to gather in certain towns such as Toulouse, Montpellier, Bordeaux and above all Paris,” Castaner said at a press conference Friday in Paris. “Their objective is clear: to do another March 16,” when there was widespread destruction on the Champs Elysees avenue in the capital.

The Paris police say they won’t allow protests Saturday near the Champs Elysees and Notre Dame.

Although Monday’s fire at Notre Dame initially united France in its grief, the huge sums of money being pledged for its reconstruction has become a new source of anger for some.

“Yesterday a historic building burned and it’s very serious, but money has flowed in and this monument will be rebuilt,” Nicolle Maxime, a truck driver from Brittany who goes by the online name “Fly Rider” and has a wide following, said in a video he posted Tuesday. “The Earth still turns, we have people who can’t make it to the end of the month, we have people who sleep on the streets, and that’s what our fight is about.”

The Notre Dame fire broke out an hour before Macron was due to address the country on television to outline tax and other measures he’s proposing as a result of the “Great Debate,” a two-month series of town-hall meetings he organized to let the French vent grievances raised by five months of Yellow Vests protests. That speech was canceled, and Macron next week is likely to make the announcement, perhaps in a different format.

It was in response to Macron’s planned speech that many groups of Yellow Vests and other protesters had called for large turn outs this Saturday. The leaderless Yellow Vests movement is notoriously unpredictable so it’s not known how many will change their plans as a result of the fire. The risk for them is a public backlash in the event of violence and destruction this weekend, with little tolerance for such behavior so soon after the tragedy.

According to people briefed on his planned speech, Macron was due to announce tax cuts for middle-class households, inflation indexation of small pensions and no more closings of schools and hospitals until the end of his first term in 2022 — moves that all have popular support according to an Odoxa poll published today in Le Figaro newspaper.

Still, most Yellow Vests who were interviewed said the measures were too little too late to greatly improve their purchasing power. Many want to continue their weekly protests.

Recent demonstrations by the Yellow Vests have seen turnout in the tens of thousands, well below the hundreds of thousands at the end of last year, and have been largely peaceful. But three Saturdays ago there was widespread looting and vandalism on the Champs Elysees avenue in Paris, reminiscent of the Dec. 1 ransacking of the Arc of Triumph. Much of the worst outbursts of violence has been blamed on Black Blocs, who often accompany protests across Europe.

The last polls gauging public support for the Yellow Vests were held in late March and showed that about half the French have sympathy for the movement, well below the roughly 80 percent who expressed such views last year. The movement began as a protest against rising gasoline taxes and morphed into general unhappiness about the cost of living and Macron’s supposed out-of-touch governing style.

The Yellow Vests have no central leadership. Protests are organized by various local leaders via social media. The widespread damage to Notre Dame seems to have done little to dim their fervor.

Many have, in fact, criticized the huge sums of money being pledged for the rebuilding of the cathedral as well as the tax breaks that encourage donations. French billionaires — including Francois Pinault and Bernard Arnault — and many of the country’s largest companies have collectively promised almost 1 billion euros ($1.13 billion) for the reconstruction.

That has been something of a red flag for the Yellow Vests.

In an interview on BFM television Wednesday, Ingrid Levavasseur, one of the early leaders of the movement, denounced the “inertia of big groups when it comes to poverty and who then show off their ability to assemble crazy sums of money in one night for Notre Dame.”

Benjamin Cauchy, another early Yellow Vests leader, said on Twitter that it’s “good that the oligarchy is giving. But exemplary tax behavior would be better. Good conscience doesn’t cover up for poverty and austerity.”