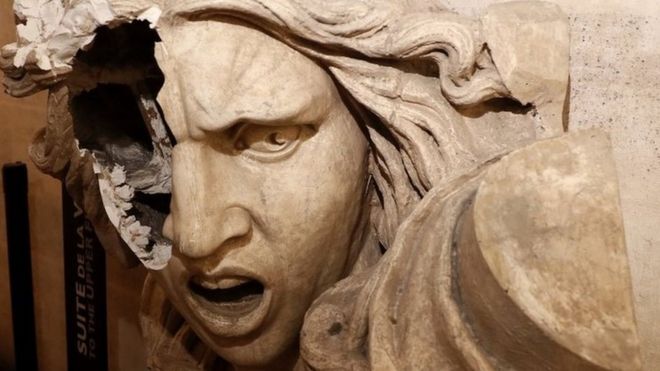 A statue of Marianne, a symbol in France, was vandalized inside the Arc de Triomphe  -EPA

French President Emmanuel Macron has held an urgent security meeting following a day of riots by thousands of anti-government protesters.

Ministers said that while no options had been ruled out, imposing a state of emergency had not been discussed during the talks – despite earlier reports.

Protests over fuel tax have grown into general anger at higher living costs.

Three people have been killed in the protests since demonstrations started more than two weeks ago, police said.

Justice Minister Nicole Belloubet has promised to bring the full force of the law to bear on people who are found to have resorted to violence.

Before the security meeting on Sunday, Mr Macron inspected some of the damage caused in the disturbances, which had centred on Paris.

More than 100 people were injured in the city, including 23 members of the security forces, and nearly 400 people were arrested, police said.

Mr Macron visited the Champs-Elysées and the Arc de Triomphe, which was scaled by demonstrators on Saturday.

He later chaired an urgent meeting at the presidential palace, involving the interior minister and top security service officials.

Government spokesman Benjamin Griveaux earlier told Europe 1 radio that a state-of-emergency declaration was a possible option. “We have to think about the measures that can be taken so that these incidents don’t happen again,” he said.

Who are the protesters?

The “gilets jaunes” protesters, so-called because they have taken to the streets wearing the high-visibility yellow clothing that is required to be carried in every vehicle by French law, are complaining at a sharp increase in diesel taxes.

Mr Macron says his motivation for the increase is environmental, but protesters call him out of touch – particularly with non-city dwellers who rely on their cars.

The protest movement has no identifiable leadership and has gained momentum via social media, encompassing a whole range of participants from the anarchist far left to the nationalist far right, and plenty of moderates in between.

Can Macron heal the rift?

Coming straight from the airport, the president was greeted with cheers but also boos as he looked at the wreckage of burnt-out cars and smashed windows on the Avenue Kléber.

At the Arc de Triomphe, he saw the graffiti targeting him and his government sprayed on the outside, and inside the devastation in the ticketing and reception areas, which had been ransacked by rioters.

The president and his ministers must now decide what action to take in response to a turn of events that in its drama and violence has shocked the country.

He may be hoping that the wanton destruction in the capital marks a turning point, and that many ordinary “yellow vests” will now feel they have had enough.

If so, that might be a rash calculation. The bigger point is their grievances over rising taxes and falling standards of living, and they still have plenty of support.

What happened on Saturday?

The “yellow vest” protesters rallied for a third weekend on Saturday, taking to the streets across the country, including in Narbonne, Nantes and Marseille.

One driver died in an accident at a protesters’ blockade in Arles, after a car collided with a heavy goods vehicle, a gendarmerie official told Reuters news agency.

Nearly 190 fires were put out and six buildings were set ablaze, the interior ministry said.

Department stores and metro stations were closed as a result of the violence.

What has President Macron said?

“I will never accept violence,” Mr Macron told a news conference in Buenos Aires on Saturday.

“No cause justifies that authorities are attacked, that businesses are plundered, that passers-by or journalists are threatened or that the Arc du Triomphe is defiled,” he said.

He has long maintained that his fuel policies are needed to combat global warming and has accused his political opponents of hijacking the movement in order to block his reform programme.

Earlier this week, Mr Macron tried to strike a conciliatory tone, saying he was open to ideas about how the fuel tax could be applied.

What has angered drivers?

World oil prices did rise before falling back again but the Macron government raised its hydrocarbon tax this year by 7.6 cents per litre on diesel and 3.9 cents on petrol, as part of a campaign for cleaner cars and fuel.

The decision to impose a further increase of 6.5 cents on diesel and 2.9 cents on petrol on 1 January 2019 was seen as the final straw.