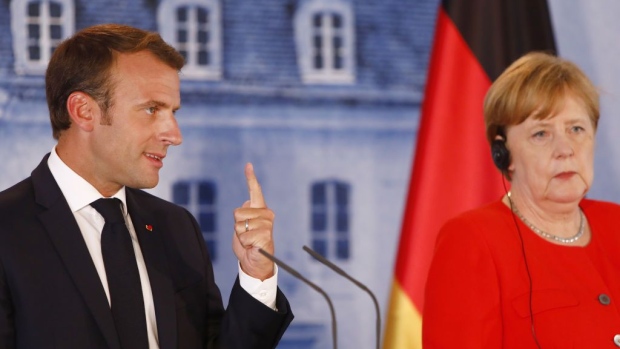 (Bloomberg Opinion) — Now that German leaders have responded to French President Emmanuel Macron’s provocative remarks concerning the future of the North Atlantic Treaty Organization, an unusually wide public rift has emerged between France and Germany. At its root, it’s about France’s leadership ambitions, to which Germany is opposed without itself wanting to lead.

“We do want a strong and sovereign Europe,” Foreign Minister Heiko Maas wrote in an op-ed article in the weekly Der Spiegel on Sunday. “But we need it as part of a strong NATO, and not as a substitute.”

That doesn’t just mean Maas is keen to preserve Europe’s, and Germany’s, transatlantic alliance regardless of U.S. President Donald Trump’s relative lack of interest in it — simply because Europe cannot defend itself without U.S. help today. Maas insisted that “when Europe is one day able to defend its own security, we should still want NATO.” And, directly answering Macron’s musings about improving relations with Russia as the alliance with the U.S. erodes, the German minister declared that “Germany will not tolerate any special arrangements, not vis-à-vis Moscow and not on any other matters,” because it takes the security of Poland and the Baltic states to heart.

These are strong statements, especially coming from Maas. He’s a member of the Social Democratic Party, which is less pro-U.S. and pro-NATO than its senior partner in Germany’s governing coalition, Chancellor Angela Merkel’s Christian Democratic Union. But on the points Maas made in his article, the German government appears to be united. Merkel, too, has criticized Macron’s vision more sharply than on any other matter since his election in 2017, calling it a “sweeping attack.”

“We must bring the European part of NATO closer together,” Merkel said on her regular Sunday podcast. That, she added, was what the European Union defense project, known as Permanent Structured Cooperation, or Pesco, is all about.

That’s an approach radically different from Macron’s. To him, the EU defense project is about strategic sovereignty. To German politicians, it’s largely an efficiency project aimed at harmonizing European countries’ defense industries, cutting the number of different defense systems used by member states’ armies, and centralizing the development of new weapons such as warplanes and tanks.

This German visio is consistent with the Framework Nations Concept, adopted by NATO in 2014. It’s a mechanism for voluntary defense cooperation built around specific nations’ projects, such as Germany’s own idea of coordinating the development of defense capabilities, or the U.K.’s work on a multinational rapid response force. Under the concept, pretty much any cooperation projects, even those including non-NATO members such as Sweden and Finland, can take place under NATO’s umbrella.

With NATO providing such a flexible platform, it’s often not obvious why any other defense cooperation programs are necessary. NATO and the EU have agreed to coordinate their activities, anyway, and it’s evident from progress reports on that effort that this creates a lot of duplicative bureaucratic activity such as cross-participation in working groups. The same exercises under the program get two different names, one for the EU and one for NATO.

But especially from the French point of view, NATO isn’t the best platform for joint procurement programs, because outside it, Europeans can keep out U.S. competition. Involving NATO also means dealing with the U.S. as the organization’s military leader. France, as the country with the strongest military in the EU, likes to exercise leadership, too. Which is perhaps the best explanation for Macron’s European Intervention Initiative, an attempt at coordinating European countries’ strategic thinking that isn’t even part of EU defense cooperation.

Germany doesn’t have France’s military ambitions. It’s a low defense spender because higher expenditure is politically unpopular. The Bundeswehr’s combat readiness is constantly in question, and there’s all the weight of history on the shoulders of  German leaders. So German politicians see their function in maintaining European security differently than Macron does, even if they, too, refer to “leadership.”

“As a country at the centre of Europe, Germany must play a central, mediatory and balanced role – within Europe and vis-a-vis the United States,” Maas wrote. “If we do not assume this leadership role, nobody will.”

Being a mediator, though, is not the same as being a leader. An unambitious, compromise-minded Germany won’t compete with Macron’s cocky France, but it’ll be a drag on Macron’s security strategizing, getting in the way as he tries to provoke the U.S. with talk of strategic autonomy or flirt with Russia. It’ll provide the reliably boring alternative, and that’s probably for the best: Any machine in which Macron designs the sporty engine needs German-made brakes.

To contact the author of this story: Leonid Bershidsky at lbershidsky@bloomberg.net

To contact the editor responsible for this story: Tobin Harshaw at tharshaw@bloomberg.net

This column does not necessarily reflect the opinion of the editorial board or Bloomberg LP and its owners.

Leonid Bershidsky is Bloomberg Opinion’s Europe columnist. He was the founding editor of the Russian business daily Vedomosti and founded the opinion website Slon.ru.