HAWAII’S relentless Kilauea volcano is spitting deadly lava up to 180ft into the air six weeks since the monster first began its terrifying eruption sparking fears the devastation is far from over.

In the latest update from the US Geological Survey (USGS), the organisation which has been monitoring the beast since its very first explosion on May 3, warned blistering lava has been seen shooting out of the volcano reaching heights of 180ft as Big Island remains on red alert.

The eruption shows no sign of stopping with USGS warning: “The eruption in the lower East Rift Zone continues with little change.”

Lava is currently spilling out of Kilauea’s Fissure 8 and pooling towards the ocean where the combination of blistering heat from the lava and the cool water creates laze, a toxic phenomenon containing hydrochloric acid that when it comes into contact with skin causes severe rashes and blindness in eyes.

Fleeing locals, initially warned not to head to the ocean to avoid laze, have been dealt another blow as the USGS warned laze is being blown in land making it impossible to fend off. 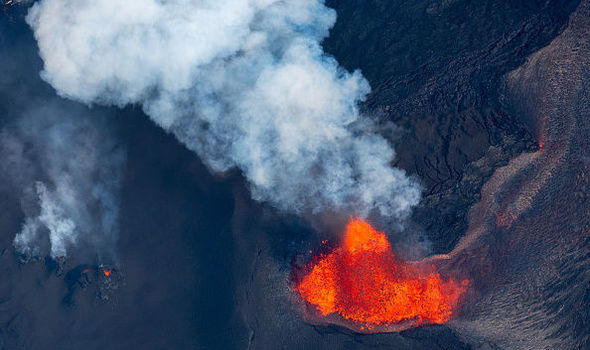 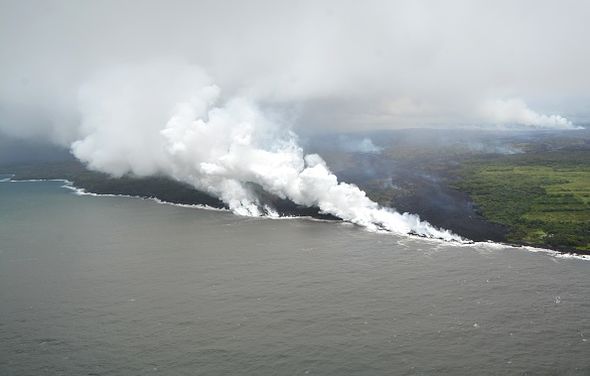 USGS said: “Lava fountains up to 187 feet tall rise from the Fissure 8 spatter cone and feed the established channel that transports lava to the ocean at the Kapoho coastline.

“One main ocean entry is producing a billowing plume of laze that is being blown onshore.”

“Residents are urged to minimise exposure to these volcanic particles, which can cause skin and eye irritation similar to volcanic ash.” 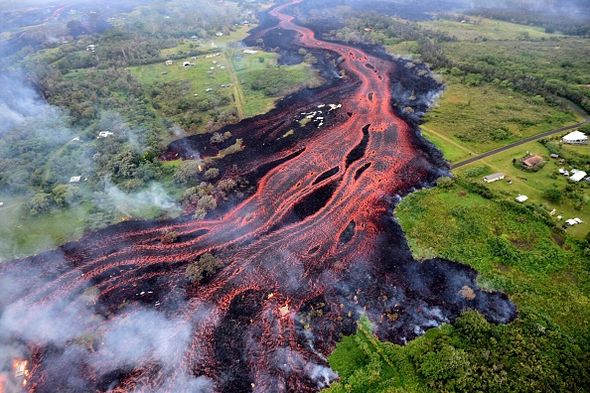 GETTY – Magma has added acres of land to the island

Laze is one one of a long list of hazards residents are desperately attempting to avoid in their escape from the angry volcano.

Killer lava is the most dangerous hazard, which as well as having swallowed more than 600 homes during its frightening wrath, it has also added a further 120 acres of land to the island – the equivalent of 38 football pitches.

The lava is traveling thick and fast too, at a speed which could fill an entire Olympic swimming pool every 25 seconds.

The coast itself is also extremely dangerous as the USGS has warned the end is unstable and could break off and fall into the ocean putting yet more lives at risk.

A map of the 50th US state shows lava has gobbled up a fifth of of Big Island as more than 2,000 residents run for their lives.

Big Island is also experiencing 35 earthquakes an hour with sharp volcanic glass fragments being spat from the menacing volcano as well as a blanket of ash that threatens to paralyse the island.

The volcano began its lengthy eruption six weeks ago after locals spotted cracks in the road, the result of bubbling press mounting underground.