THE HAWAII volcano has erupted once again, sending a plume of smoke, ash and debris high into the air above Big Island’s Kilauea mountain. 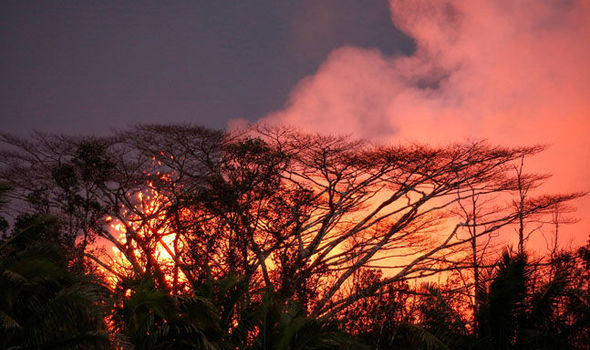 The Hawaii volcano has exploded once again this evening

The “small explosion” marked the 29th day of the ongoing eruption, which is now the most destructive in US history since the 1980 Mount St Helen blast, which killed more than 50 people.

Experts warned today’s eruption could be followed by localised earthquakes.

The US Geological Society (USGS) said this evening: “A small explosion occurred at Kilauea’s summit at 12:51 AM HST – about 20 hours since the previous event.

“Seismicity dropped immediately after the explosion and remains low at this time, but based on past trends we expect earthquake rates to increase over the course of the day.”

Lava continues to erupt from fissures with one crack sending fiery magma more than 200 feet into the air.

Volcanic fog, volcanic glass and gas emissions continue to pose a threat to those living in the area.

No one has died in this Hawaii eruption but some 600 homes have been swallowed by lava flows from Kilauea since May 3, Hawaii County Mayor Harry Kim said last week.

Vacationland, a private development believed to comprise about 160 homes, was completely erased, and at least 330 houses were devoured by lava at Kapoho Beach Lots, Kim said.