The U.S. Immigration and Customs Enforcement Agency (ICE) released its 2019 enforcement and removal operations report last week, providing a breakdown of the more than a quarter-million illegal aliens removed throughout the year.

The ICE report also detailed some of the changing patterns in illegal immigration efforts over the years.

Of those deported, 85,958 of those illegal aliens were deported from within the interior of the U.S. while the more than 181,000 remaining illegal aliens were stopped at the border. U.S. Customs and Border Protection (CBP) served as the arresting agency for the majority of those arrests made. 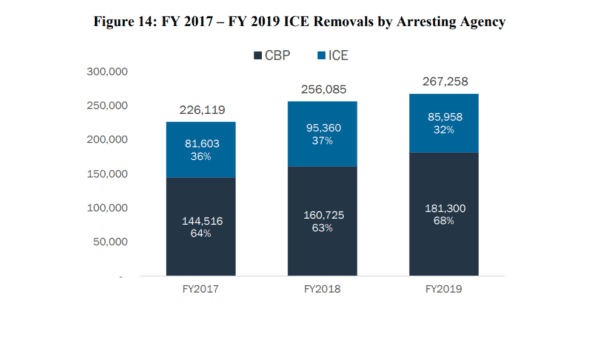 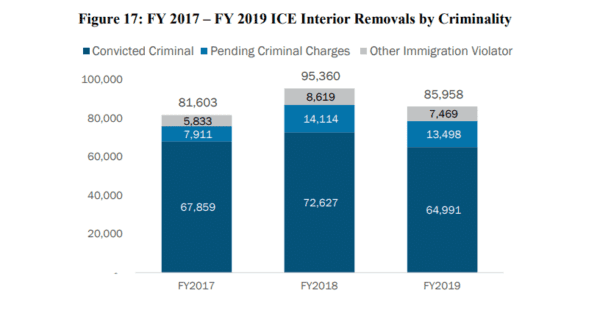 In total, between those removed from the interior and those stopped at the border, 173,799 illegal aliens were either had criminal convictions or pending criminal charges, a total of 65 percent. 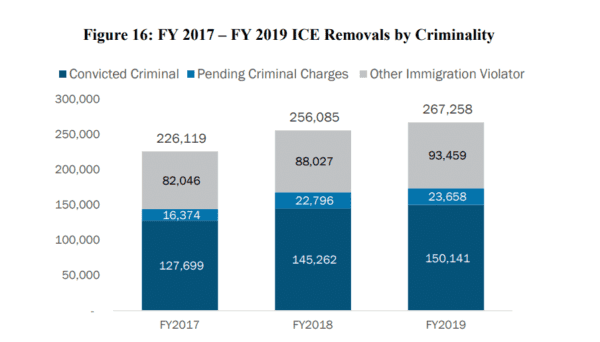 Ali Caby, also known as “Alex Caby” was among those terrorist suspects in the U.S. who was deported in 2019. Caby, a 41-year-old Iranian, reportedly took part in an effort to aircraft parts and equipment to the Hizballah terrorist organization as well as the Iranian Revolutionary Guard Corps, which the U.S. labeled as a Foreign Terrorist Organization (FTO) in April.

Houcine Ghoul, a 45-year-old Tunisian man, was also removed on terror suspicions after an investigation revealed 2014 photos indicating support for ISIS. Ghoul had been in the U.S. since 2001 on an overstayed visa. According to ICE, he remained in the U.S. through a fraudulent marriage.

Yassin Muhiddin Aref, a 38-year-old Iraqi national was also removed following an FBI investigation which began in 2003 after his name reportedly appeared in three different terror group phone records. Aref was subsequently arrested after the FBI determined he had tried to conceal the proceeds of the sale of a surface-to-air-missile expected to be sold to Jaish-E-Mohammed terror group.

After serving a prison sentence since 2007, a judge ordered Aref be deported back to Iraq in October of 2018.