A desperate scramble from Syria’s Idlib province has begun. Pouring from the last rebel stronghold as state troops advance, the region’s weary populace face a perilous journey. The road north is their only real hope—but strafed daily by machine gun fire and aircraft missiles, it’s a daunting prospect.

Still, if they’re to reach the Turkish border, it’s a route they must brave. And then what? Into Europe, somehow, and a spot in a squalid, disease-ridden refugee camp. It’s a passage tens—if not hundreds—of thousands will make in the coming months. There was hope, this year, that Europe’s migrant crisis might abate. Such optimism has now faded, replaced by a sobering realisation: 2020 could mark a new low.

It’s a fact Turkey’s President Erdogan has made unapologetically clear. Already home to the planet’s largest refugee population—numbering almost 4 million—his nation simply can’t accommodate any more, Erdogan claims. Looking to head off the migrant surge, he has closed the border with Syria—but the evacuees’ inexorable journey north will continue nonetheless. 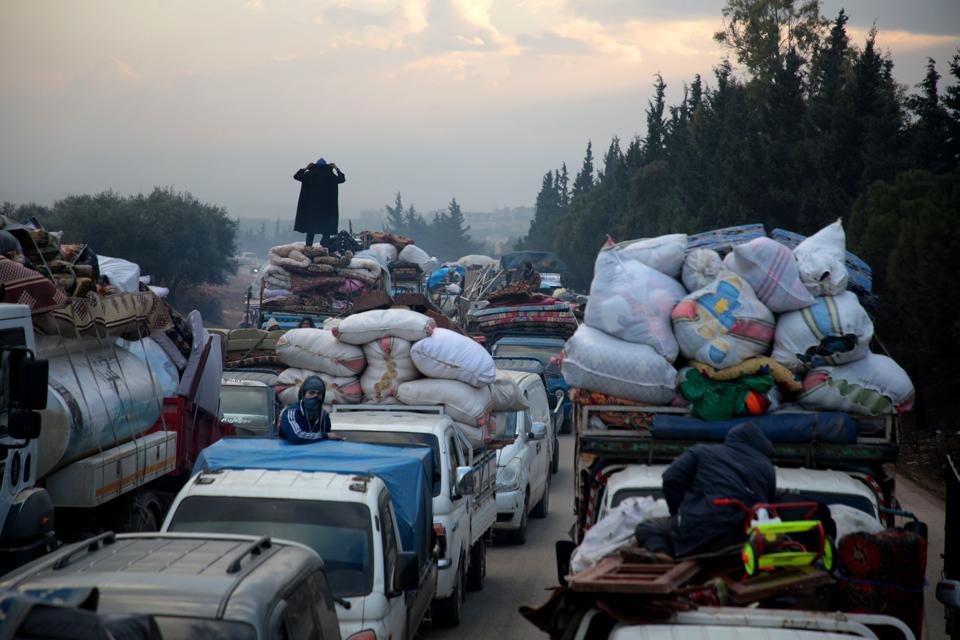 This picture taken on December 24, 2019, in the village of Hazano, about 20 kilometres northwest of … [+]  AFP VIA GETTY IMAGES

This new “migrant burden” shall not be shouldered by Turkey alone, the firebrand leader said on December 23. Like it or not, “all European countries” will have to pull their weight or feel the surge’s “negative effects” firsthand, he warned.

The sheer scale of crisis in Idlib points to a painful future indeed. Home to three million people, the region is the last to oppose Bashar al-Assad’s totalitarian rule. In recent days, as Russian-backed government forces closed in, over 235,000 have abandoned their homes. It is the single largest displacement of Syria’s eight-year civil war, with much of the province’s south now “almost empty,” according to U.N. observers.

It bears all the hallmarks of 2015’s migrant upheaval. That year—the apex of the ongoing refugee crisis—more than a million individuals arrived in Europe, fleeing war or destitution in the Middle East and North African. In time the numbers lessened, thanks largely to a deal brokered by the E.U. and Turkey. For consideration of €6 billion, Ankara would start preventing the passage of migrants through its borders into Europe, Erdogan agreed in 2016. 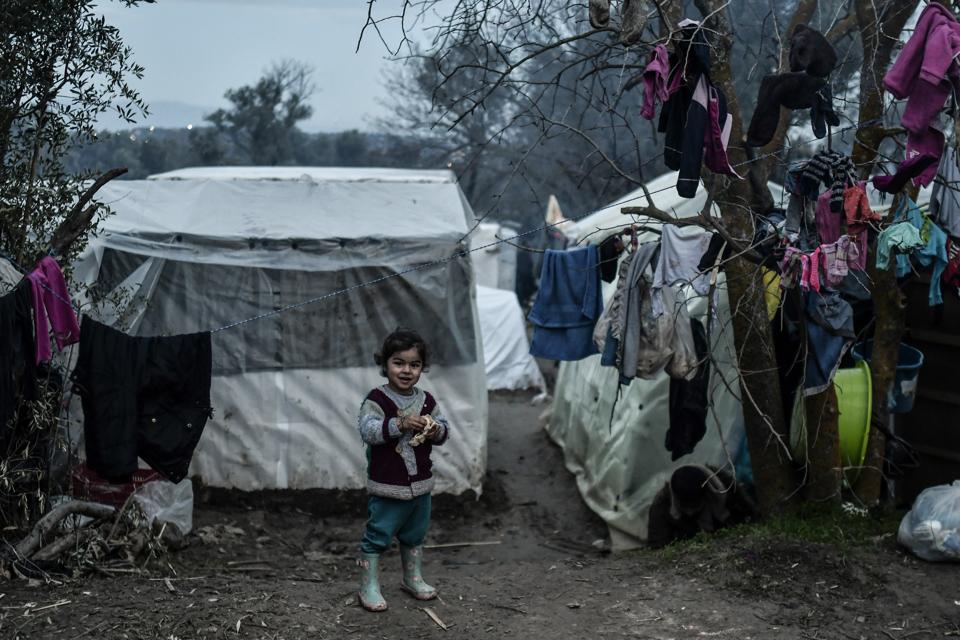 A child stands among the tenst, at the Vial refugee camp, on the Greek island of Chios, on December … [+]  AFP VIA GETTY IMAGES

But allegations of noncompliance are rife. Turkish patrol boats have reportedly reneged on their obligations, allowing refugee vessels to cross the Aegean Sea into Greek waters. In 2019 alone, over 70,000 successfully made the journey, leaked E.U. documents reveal. For the tiny spits of land they wash upon, the consequences have been catastrophic.

Lesbos’s notorious Moria refugee camp—the largest of its kind in Europe—has an official capacity of 2,000. An estimated ten-times that currently reside there. Paper-thin tents are surrounded by piles of rotting rubbish, sanitation is poor, food scarce, and access to vital medicine patchy. In a sobering reminder of the dismal conditions, two refugees this month committed suicide. 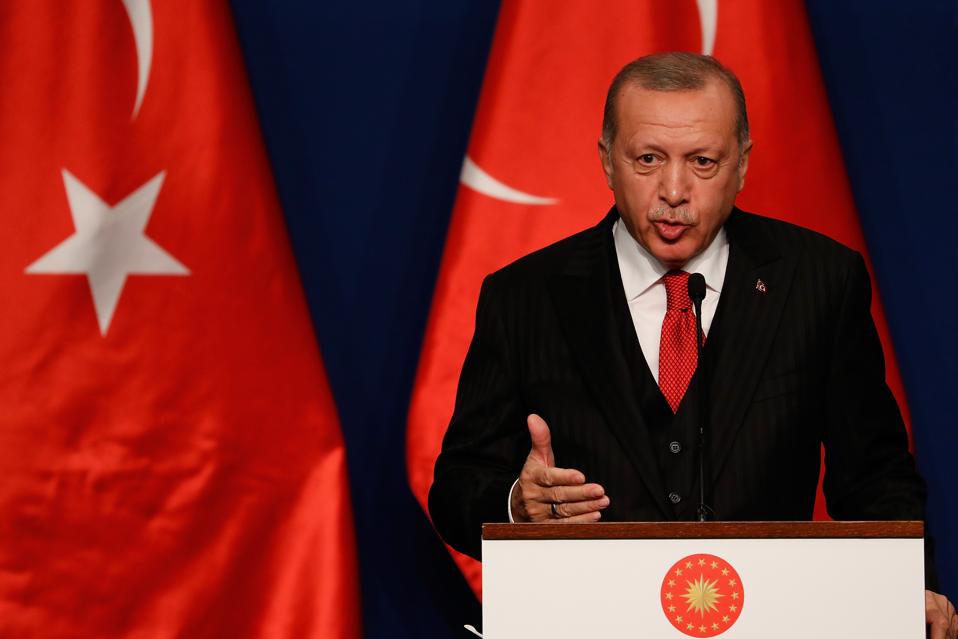 The pair had, in fact, made it to mainland Greece before they died. Most do not. A key element of Europe’s strategy is to keep refugees offshore, a way of preventing transcontinental travel. Still, finding passage through the Balkans and into Austria and Germany, tens-of-thousands reach central and western Europe every year.

For centrist governments struggling to contain surging right-wing sentiment, this is a problem. Accordingly, Germany’s Angela Merkel will next month visit Turkey in an effort to reaffirm the E.U.’s migrant deal, reports suggest. It will be a tough sell. Politically hemmed in himself, Erdogan wants rid of his nation’s refugee contingent. They’re destined, it seems, for a ‘safe zone’ in Syria’s northeast – a roiling region now pacified by Turkish troops, Ankara claims.

Whether that area can accommodate mass resettlement, let alone the new wave of migrant misery en route from Idlib, remains unclear. Behind them, they leave unfathomable hardship. Ahead, a future bereft of certainty, bar one lamentable fate: to be a political burden no one wants to shoulder.

I’m a U.K.-based journalist who’s worked at the sharp end of political broadcasting in Westminster, experienced the Brexit brouhaha up close, and interviewed some of the biggest names in U.K. and European policymaking. After a stint as editor of my undergraduate student newspaper, I found myself in London writing for, among others, The Independent.

As the 2015 General Election approached, I took on a producer role at Sky News, working across the channel and on multiple platforms. Inspired by the heady political times, I moved to Sky’s Westminster studio shortly after, becoming a political news editor.

The intense, fast-paced posting saw me direct the daily political coverage, produce content going out live, and interview some of the era’s biggest political hitters.

Returning to my writing roots, I continue to focus on British and E.U. politics, as well as dabbling in wider foreign affairs.