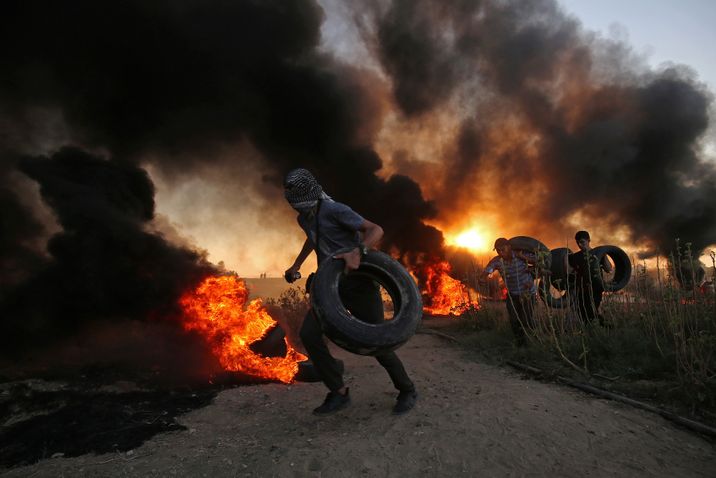 Black smoke from burning tires hangs in the sky as Palestinian protesters hurl stones toward Israeli troops during a protest at the Gaza Strip’s border with Israel, Friday, Oct. 12, 2018  AP Photo/Khalil Hamra

130 Gazans were injured from live fire according to the Palestinian Health Ministry as some 10,000 protested.

Israel Defense Forces (IDF) deployed aircraft to fire into the Gaza Strip at a group of Palestinians launching incendiary balloons into Israel as the Friday demonstrations continued despite strong vociferous calls for de-escalation.

“A short while ago, a terrorist squad was launching arson balloons from the southern Gaza Strip into Israeli territory. In response, an IDF aircraft fired towards the squad,” it stated Friday late afternoon.

At least 130 Gazans were injured from live fire according to the Palestinian Health Ministry as some 10,000 protested on the border, though farther away than usual, following warnings from Israel for a more forceful response to the riots.

The IDF called it the least violent Friday on the border in seven months, referring to when the “Great March of Return” protests first began. It added that the IDF did not have to modify its policy for handling the protests, unlike in previous weeks when violence got out of hand.

The defense establishment estimated that Hamas placed armed men near the fence in order to help calm the area and prevent violent incidents, though there were reports of some Palestinians who attempted to breach the security fence but later turned back.

There were high stakes Friday as Gazan leaders who organize the protests even called for peaceful demonstrations Friday, in hopes of furthering an Egyptian-led deal that would bring an end to the border violence.

“The most important message tomorrow is the masses gathering in a peaceful manner,” Khaled al-Batsh, a senior leader of the Palestinian Islamic Jihad (PIJ) terror group and an organizer of the march, wrote in a statement on Thursday evening.

“The March of Return is continuing until its goals are attained, with an emphasis on the importance of holding marches that will be non-violent and led by the people,” he wrote.

“There will be attempts to prevent them from approaching the fence. There might be a reduction of balloons,” he continued echoing calls by al-Batsh. “We hope there will be no human losses tomorrow. We are giving a chance to the Egyptian efforts,” A member of the organizing committee of the Gazan marches, Daoud Shehan, said Friday according to Times of Israel. 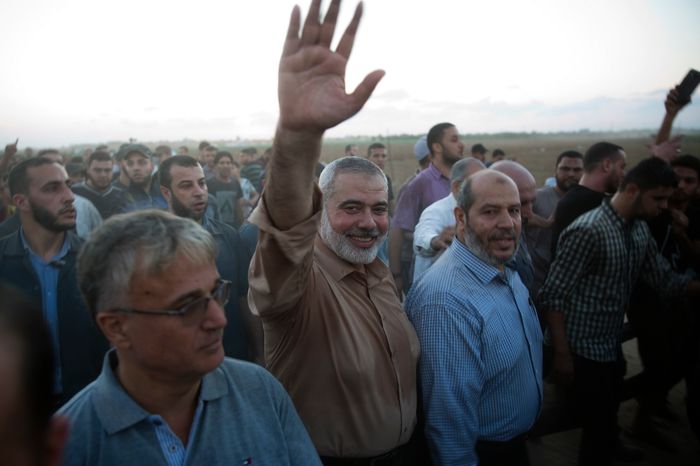 Rhetoric on both sides intensified following the latest flare up on Wednesday that saw two rockets fired from the Palestinian enclave towards Israeli territory. One landed in the courtyard of a private home in the southern Israeli city of Beersheba, causing serious damage but no injuries and a second landed in the Mediterranean Sea close to Tel Aviv.

In response Israeli jets launched air raids on some 20 “terror targets” including a cross-border attack tunnel. One Palestinian man was killed during the retaliation.

But Hamas and Palestinian Islamic Jihad (PIJ) quickly distanced themselves from the attack, blaming the rocket fire on rogue jihadists groups in the Strip attempting to undermine Egyptian mediation efforts and called it “irresponsible.” Hamas even pledged to undertake a full investigation into the incident, in an apparent bid to calm new fears of war.

It was decided, following a five-hour long security cabinet meeting on Wednesday, that the Israel Defense Forces (IDF) would boost its military presence along its southern border but would refrain from declaring war with its southern neighbors. Haaretz reported that this was in a bid to wait for Egypt-led efforts to negotiate a long-term ceasefire pan out.

However, the military buildup was quickly visible — a break away from former policy that is often characterized by cover mobilization — on Thursday as tanks, artillery and engineering troops gathered along the border.

Israeli soldiers were given directives to fire at Gazans from a farther distance than current regulations allows as well as permitting them to respond more forcefully to incendiary balloons expected to be launched.

Israel’s Prime Minister Benjamin Netanyahu warned a day earlier that “Israel will act with great force” if the attacks did not cease.

Thereafter ostensibly contradicting its previous disavowal of the rocket incident, Hamas’ armed wing known as Izz ad-Din al-Qassam Brigades released a Hebrew video message on Thursday threatening Israel against making a “mistake.” In the broadcast, asked members of the militant group are shown purportedly preparing to launch advanced rockets and urging Palestinians to join the violent demonstrations on the border. A man watches a house that was hit by a missile fired from Gaza Strip, in the city of Beersheba, southern Israel, Wednesday, Oct. 17, 2018. A medical service said a woman and her three children, whose home was struck, were being treated for shock after the attack.  AP Photo/Tsafrir Abayov

UN Special Coordinator for the Middle East Peace Process, Nickolay Mladenov warned Thursday that “we remain on the brink of another potentially devastating conflict, a conflict that nobody claims to want, but a conflict that needs much more than just words to prevent.”

“Gaza is imploding. This is not hyperbole. This is not alarmism. It is a reality,” Mladenov told the council.

Egypt has also reportedly warned Hamas that a renewal of violence along the border would trigger a heavy Israeli retaliation.

Meanwhile on Thursday amid escalating tensions, a delegation of Egyptian intelligence officials pressed ahead with mediation efforts and met with Hamas leader Ismail Haniyeh before returning to Israel. Spy chief Abbas Kamel was absent from the discussion after he postponed his visit due to the spike in violence.

Attempts to reignite talks follows on from previous efforts by Egypt to negotiate a long term ceasefire between Israel and Hamas and bring much-needed humanitarian relief to the people of Gaza. Talks recently lost momentum, with Cairo instead turning its focus towards intra-Palestinian reconciliation.

Israel and Hamas have been brought to the brink of full-scale war on multiple occasions in the past months as the clashes have escalated to rocket bombardments by Palestinian militant factions and retaliatory Israeli airstrikes.

At least 205 Palestinians have been killed since protests and clashes erupted along the border in late March, with at least 50 of those killed identified as members of Hamas. One Israeli soldier has been killed by Hamas sniper fire in that time.

The protests kicked off on ‘Land Day’, which commemorates the killing of six unarmed Arab protesters in Israel in 1976, and were meant to last until May 15, which marks the Nakba (“catastrophe” in Arabic), when more than 700,000 Palestinians fled or were expelled in the 1948 war that followed Israel’s creation.