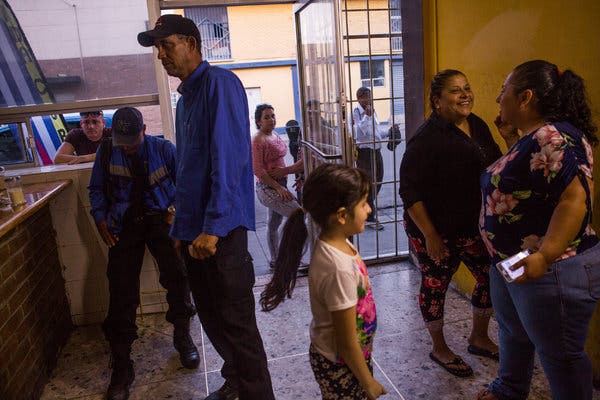 CIUDAD JUÁREZ, Mexico — There is a new hint of life in the dilapidated downtown of Ciudad Juárez, which residents abandoned as a recession and drug gang murders ravaged the city a decade ago.

Thousands of Cubans, waiting in limbo for a decision on their requests for asylum in the United States, have made the crumbling few blocks their home, finding work and renting cheap hotel rooms.

The first Cuban restaurant opened in April when a migrant staff of 10 began serving up the traditional shredded beef dish known as ropa vieja. Banners bear the Cuban flag on the sidewalk outside, signaling how the city’s newcomers are starting to forge a life here, even if it still remains difficult, uncertain and temporary.

“Everything is a question of luck,” said Ramón Santo Domingo Ramos, the restaurant’s cook.

Border communities like Ciudad Juárez, filled with migrants from Cuba, Central America and elsewhere, are adapting to a new reality: They may be the final destination, and no longer just a stop on the way north to the United States.

President Trump’s strict anti-immigration policies mean that a growing number of migrants are stranded in such cities. The divisive debate over immigration in the United States has taken on more resonance in Ciudad Juárez, after a gunman fueled by racism killed 22 people this weekend at a Walmart just across the border in El Paso, Tex. 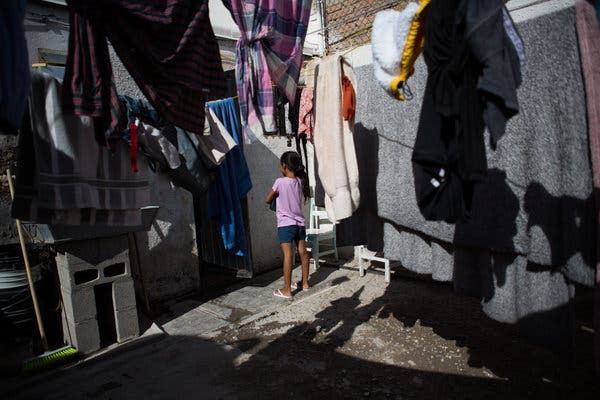 A child waiting for a shower at a migrant shelter in Ciudad Juárez. It’s one of many shelters that have sprung up in the city.CreditCelia Talbot Tobin for The New York Times

“They want to cross to the United States,” said Armando Cabada, the mayor of Ciudad Juárez. “They have the American dream, but they run into Trump’s wall.”

Since the beginning of the year, the Trump administration has been sending some migrants who have requested asylum back to Mexico as their cases wind through the courts. In June, after Mr. Trump threatened tariffs on all exports, Mexico agreed to accept an increase in the number of migrants returned under that policy.

Since then, the number of migrants in Ciudad Juárez has swelled to more than 12,000, with the expectation that as many as 300 a day will be returned to the city from the United States.

Officials are scrambling to accommodate them, working with Catholic and evangelical churches to open new shelters and collaborating with business and farm groups to offer jobs.

Last week, the Mexican federal government opened a cavernous shelter in a vacant factory to process asylum seekers returned from the United States. The plan is for migrants to stay temporarily while they seek work or move to one of more than a dozen shelters run by the churches.

In a side room at the shelter, a dozen people (one with a baby) listened as a computer instructor from a local foundation led them through basic skills. Soldiers served a lunch of pasta soup, tortillas, chicken and beans to about 160 people, while a couple of doctors were on call. 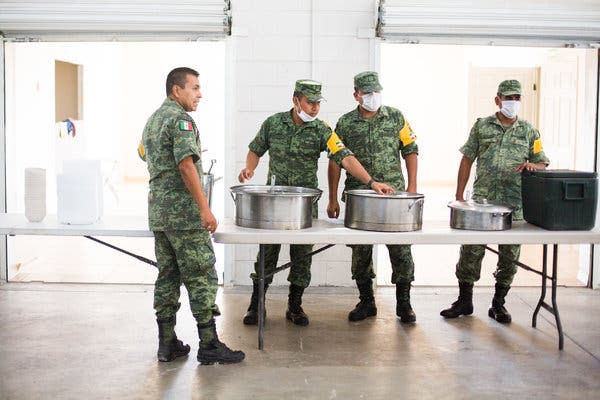 “We are dealing locally with a situation that we didn’t provoke,” said Enrique Valenzuela, the general coordinator for the Population Commission of Chihuahua, the home state of Ciudad Juárez.

“Juárez is already another city,” he said. “Juárez is changing since this phenomenon began.”

Ciudad Juárez has long been a city of migrants, sprawling ever further into the desert as Mexicans arrived from the South with the same hope of crossing into the United States. Some stayed either by choice or necessity as the border hardened, and they found jobs in the export factories that now employ over a quarter-million people and tie the city firmly to the United States.

The newcomers from other countries, though, are unable to follow the same path, one that took decades to establish and was possible only with the support of extended families.

A decade ago, as rival drug-trafficking organizations fought over control of smuggling routes to the United States, Ciudad Juárez became one of the deadliest cities in the world. While the violence has abated, organized crime is still active and homicides are inching up again.

So many unmoored migrants are easy targets for organized crime, either as recruits or targets of kidnapping, said Josiah Heyman, director of the Center for Inter-American and Border Studies at the University of Texas at El Paso. “Juarez is finely balanced, with the potential to go back to hyperviolence,” he said.

Rocío Meléndez, a lawyer with Integral Human Rights in Action, a Juárez human rights group, said that 31 percent of the migrant women who had been referred to her over the past three weeks were victims of rape, extortion, kidnapping or human trafficking.

“Many people are shutting themselves up in their shelters,” she said. “It will be hard for them to incorporate themselves into the labor market.”

Even when they do, the low salaries are not enough to allow families to move out of shelters without additional help from the government.

At the Good Pastor shelter, families languish in crowded rooms with little to occupy them except their phones. “It’s a cultural question,” said Juan Fierro García, the pastor who directs the shelter, which is expanding from 110 places to 250. “Here, anybody who wants work can find it, even without legal status.”

But he acknowledged that mothers caring for children are reluctant to leave them alone. Many of the families are traumatized, having fled from violence at home. And many have been split up, with some members in the United States.

Dayami, 28, who is from Cuba, carried her 3-year-old son, Brandhoon, through the Panamanian jungle to reach Mexico. “You risk your life for your children,” said Dayami, who provided only her first name, fearing repercussions to her pending asylum case in the United States.

The exhaustion and the uncertainty of her asylum case have weakened her determination. Dayami is afraid to leave her son alone to go to work, so instead, she spends her days playing with him and doing chores at a shelter run by St John the Apostle and Evangelist Church. 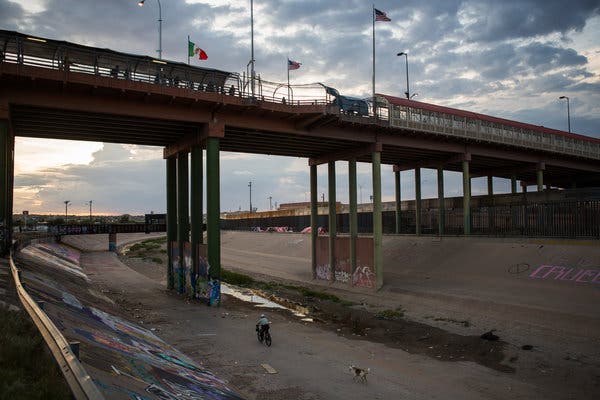 Saúl, 41, said he was given a day to leave Honduras, possibly because his evangelical preaching had angered a local power broker. He has asked for asylum in the United States, along with his son, daughter-in-law and their two infant children. The son, he said, had faced forced recruitment by a gang.

His family was allowed to stay and pursue their case from the United States, but he was sent back to Ciudad Juárez. He now lives in a crumbling shack next to a sorghum field and earns some money looking after a pony and a donkey.

“Sometimes I feel like going back to Honduras,” said Saúl, who provided only his first name, also because of his asylum case.

In the current wave of migration, Cubans are particularly well-positioned. Better educated than the Central American migrants and usually traveling without children, they are quick to look for jobs.

Locals swap anecdotes. One of the night watchmen is Cuban; so is the waitress at the usual lunch spot; the carpenter just showed up with two Cuban assistants; the salon has just added a Cuban hairdresser. 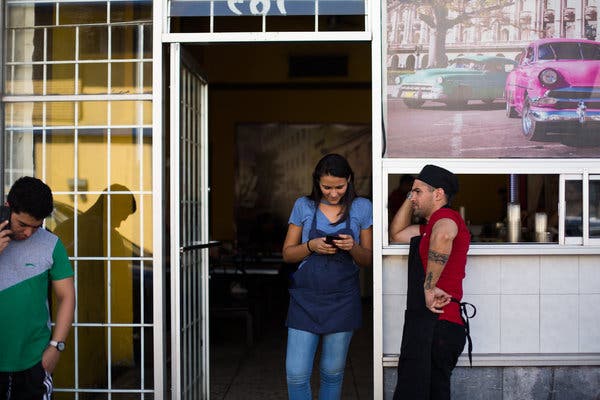 Outside Little Habana. “I feel satisfied here, I feel useful,” one worker said.CreditCelia Talbot Tobin for The New York Times

She has been working in Juárez since she was sent back from the United States in June to await an asylum hearing in December.

Trained as a chemical engineer in Cuba, she decided to leave when she was blamed for an engine breakdown at the electric company where she worked. “Somebody had to go to jail for it,” she said. As the youngest employee, she said she was an easy scapegoat.

She earns just over $10 a day. But even that meager pay is welcome after a subsistence salary and the limited food options in Cuba. “I can buy a yogurt if I want to,” she said. “Here it’s different — it’s capitalism, it’s better.”

Little Habana is owned by Cristina Ibarra, a businesswoman from Ciudad Juárez, who has given free rein to her Cuban employees to design the menus and prepare the food. A full meal of classic Cuban dishes sells for less than $3. Her next plan is to open a Cuban pizzeria with the cook at Little Habana, Mr. Santo Domingo.

He ran a small coffee shop in Cuba but chafed under the rigid rules that the government imposes on self-employment. “The police harass you,” he said. “There are no conditions to work.”

“I like to be in business,” Mr. Santo Domingo added. Unlike in Cuba, in Mexico “I can go to the market and buy everything I need to work.”

A version of this article appears in print on Aug. 8, 2019, Section A, Page 9 of the New York edition with the headline: Migrants Dream of America but Run Into Wall. Order Reprints | Today’s Paper | Subscribe