LONDON — Explosions crippled two oil tankers in the Gulf of Oman on Thursday in what the United States called “unprovoked attacks” by Iran, raising alarms about immediate security and potential military conflict in a vital passageway for a third of the world’s petroleum.

Iran called the accusations part of a campaign of American disinformation and “warmongering.”

The explosions forced the crews of both vessels to evacuate and left at least one ablaze, and hours later the causes were still under investigation. Yet the backdrop of steeply rising threats between President Trump and Iranian leaders gave the stricken ships a grave significance even before the facts became clear.

By afternoon, Secretary of State Mike Pompeo said that American intelligence agencies had concluded Tehran was behind the disabling of both ships. Without providing specific evidence, he pointed to the weapons used, the expertise and resources required and the similarity to other recent attacks attributed to Iran.

“Taken as a whole, these unprovoked attacks present a clear threat to international peace and security,” he told a news conference in Washington.

Senior American officials had already blamed Iran for similar attacks last month against four tankers on the same waterway. Iranian officials, who denied any involvement in those attacks, also rejected assertions they were behind the events on Thursday and said Iran had been framed.

“Suspicious doesn’t begin to describe what likely transpired this morning,” Mohammad Javad Zarif, Iran’s foreign minister, wrote on Twitter. Mr. Pompeo, firing back at his news conference, said Mr. Zarif “may think this is funny, but no one else in the world does.”

The most compelling evidence to support Mr. Pompeo’s claim is full-motion video footage taken by a Navy P-8 surveillance plane of an Islamic Revolutionary Guards patrol boat pulling up alongside the Kokuka Courageous, one of the stricken ships, a few hours after the initial explosion, and removing what American analysts believe was a limpet mine, two United States officials said after the secretary’s statement.

The patrol boat, with a crew of about a dozen aboard, removed the mine in broad daylight and zoomed away, blending in with other Revolutionary Guards boats in the area, according to the account by the American officials of what the video showed.

On Thursday night, United States Central Command issued a statement in which it said an Islamic Revolutionary Guard patrol boat had been “observed and recorded removing the unexploded mine” from the Kokuka Courageous.

The Kokuka Courageous was about 20 miles off the Iranian coast when it transmitted an emergency call for help after an initial explosion. When the crew surveyed the damage from the first explosion, they saw a second unexploded mine attached to the hull and evacuated the ship, according to the American officials, who spoke on the condition of anonymity to discuss a sensitive intelligence matter.

The confrontation also played out at the United Nations in a meeting of the Security Council, where the acting United States ambassador, Jonathan Cohen, told other members that Iran was behind the attacks. Iran’s United Nations mission issued a statement afterward denouncing the “inflammatory remarks” by the American representative, calling them part of “another Iranophobic campaign” of disinformation.

“The U.S. and its regional allies must stop warmongering and put an end to mischievous plots as well as false flag operations in the region,” the Iranian statement said.

[Read more about the narrow waterway that is the world’s most important oil route.]

Besides its importance as a petroleum highway, the Persian Gulf also divides bitter and heavily armed rivals, with Iran on one side and the American-backed Arab monarchies of Saudi Arabia and the United Arab Emirates on the other.

The two sides have fought for years through surrogate forces in neighboring countries, including Lebanon, Iraq, Syria and Bahrain. Saudi and Emirati forces have been battling directly for more than four years to roll back a takeover of Yemen by a faction aligned with Iran.

Anxieties over the shared dependence on the vulnerable Persian Gulf shipping lanes have always been central to their animosities, and a commitment to guaranteeing the flow of oil through the same channels is behind the substantial American military presence in the region.

Iranian officials on Thursday suggested the new attacks might be the product of an elaborate conspiracy by their enemies, seemingly pointing to American allies like Saudi Arabia, the United Arab Emirates or Israel, which have long urged Washington to take a more muscular approach to Iran.

But many analysts said there was a growing consensus in the West that Iran had been behind last month’s attacks, which took place near the port of Fujairah in the United Arab Emirates. And they argued that Iran appeared to be seeking to demonstrate it could imperil the world’s oil markets, but without leaving the kind of fingerprints that could trigger American military retaliation.

“As long as there is significant ambiguity the attacks won’t produce a casus belli,” or cause for war, said Jack Watling, a researcher at the Royal United Services Institute in London. “But Iran is demonstrating its capabilities. It is saying, ‘We can impose a cost on our adversaries in this confrontation, and it will be high.’”

Crude oil prices rose more than 3 percent in response to the crippling of the two ships on Thursday, indirectly boosting Iran’s revenue as an oil producer.

The initial White House response on Thursday was measured. Sarah Huckabee Sanders, the White House press secretary, said Mr. Trump had been briefed and that the “U.S. government is providing assistance and will continue to assess the situation.”

It was only a few hours later that Mr. Pompeo publicly blamed Iran.

The escalation came against the backdrop of a visit to Iran by the prime minister of Japan, Shinzo Abe, who was hoping to de-escalate tensions between Tehran and Washington and avert any “accidental clashes.”

Mr. Abe was carrying a note from Mr. Trump to Ayatollah Ali Khamenei, Iran’s supreme leader, who rebuffed the overture. “I do not see Trump as worthy of any message exchange, and I do not have any reply for him, now or in future,” Mr. Khamenei said Thursday after meeting with Mr. Abe, according to the ayatollah’s website. 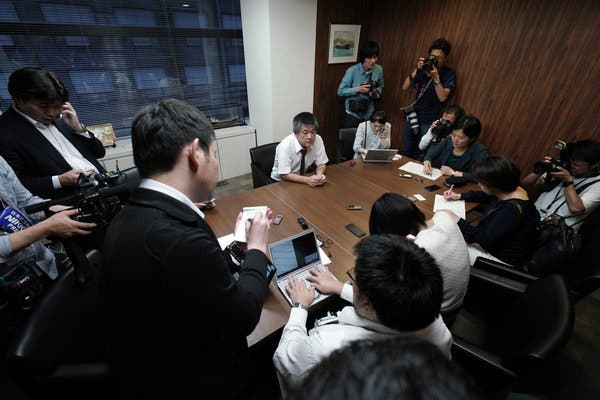 Michio Yube, top center, the director of Kokuka Sangyo, speaking to the news media in Tokyo on Thursday after one of the company’s ships was attacked near the Strait of Hormuz.CreditEugene Hoshiko/Associated Press

The animosity between Washington and Tehran began rising a year ago after President Trump withdrew the United States from a 2015 deal with international powers that limited Iran’s nuclear activity in exchange for eased economic sanctions on the country of 80 million people.

Then, laying out sweeping demands for Iran to alter its policies toward the region, Mr. Trump in April ratcheted up the pressure by imposing severe sanctions aimed at cutting off Iran’s exports of oil, the lifeblood of the now-struggling Iranian economy. He also designated Iran’s Revolutionary Guards, a part of the military, as a terrorist group.

In May, citing unspecified warnings of imminent Iranian attacks on American allies or interests, the Trump administration announced it was dispatching an aircraft carrier group to the Persian Gulf as a deterrent.

“If Iran wants to fight, that will be the official end of Iran,” Mr. Trump said on Twitter last month. “Never threaten the United States again!”

If Iran wants to fight, that will be the official end of Iran. Never threaten the United States again!

Iranian leaders, in response, have threatened to block the Strait of Hormuz, a potential Persian Gulf chokepoint. After complying with the nuclear pact for a year even after the American withdrawal, Iran has also raised the possibility of breaching the accord by taking initial steps to expand its supply of enriched uranium.

Some Iranian allies around the region have stepped up their attacks on allies of Washington, fueling fears of a wider conflict. The Houthi faction in Yemen, which is backed by Iran, has launched attacks on Saudi oil pipelines and other targets, and this week a Houthi missile hit the arrivals hall of a Saudi airport, injuring 26 people, according to Saudi news reports.

The attacks in May on the four tankers near Fujairah were relatively minor, causing only limited damage to the hulls. An international investigation presented to the United Nations later concluded that the damage was done by divers deployed from small “fast boats” who had placed limpet mines against the hulls.

On a visit to the United Arab Emirates about two weeks ago, John R. Bolton, President Trump’s national security adviser, said Iran was “almost certainly” responsible. A few days later, Mr. Pompeo called the attacks “efforts by the Iranians to raise the price of crude oil.”

The explosions that disabled the tankers in the Gulf of Oman on Thursday were far more severe.

Both took place around dawn, with distress calls at 6:12 a.m. and 7 a.m., according to a statement from the United States Fifth Fleet, which said the U.S.S. Bainbridge, a guided missile destroyer, was “rendering assistance.”

A Norwegian company that owns one of the ships, the Front Altair, confirmed that it was on fire. The crews of both vessels — about 23 in one and 21 in the other — were evacuated in lifeboats.

The owners and operators of both vessels described the incidents as deliberate attacks.

The Front Altair, registered in the Marshall Islands, was chartered by the CPC Corporation, the Taiwanese oil company, to carry naphtha, a petroleum product, from the Emirati port of Ruwais to Kaohsiung, Taiwan.

The Kokuka Courageous was carrying methanol, headed from the Saudi port of Al Jubail to Singapore. Yutaka Katada, the president of the ship’s operator, Kokuka Sangyo, told a news conference that its Filipino crew had abandoned ship in lifeboats after what he described as two attacks three hours apart.

Shipping industry representatives underscored the channel’s critical importance. “Some 30 percent of the world’s crude oil passes through the Straits,” Paolo d’Amico, the chairman of the International Association of Independent Tanker Owners, said in a statement. “If the waters are becoming unsafe, the supply to the entire Western world could be at risk.”

Reporting was contributed by Eric Schmitt and Edward Wong from Washington, Ben Dooley and Makiko Inoue from Tokyo, Vivian Yee from Beirut and Rick Gladstone from New York.

A version of this article appears in print on June 13, 2019 of the New York edition with the headline: Pompeo Blames Iran For Blasts on 2 Tankers In the Gulf of Oman. Order Reprints | Today’s Paper | Subscribe