Tehran leverages use of advanced centrifuges to call for urgent European counter-measures to US sanctions. 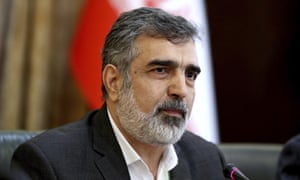 Iran has announced it has started using more advanced centrifuges that could accelerate the development of an atomic weapon in its latest attempt to pressure European powers to salvage a 2015 nuclear deal.

Behrouz Kamalvandi, the Iranian nuclear agency spokesman, told a press conference on Saturday the country did not intend to use the faster centrifuges to enrich uranium to 20% levels – an important threshold on the path to weapons-grade material – but that it had the capacity to do so.

“We have started lifting limitations on our research and development imposed by the deal,” Kamalvandi said. “It will include the development of more rapid and advanced centrifuges.

“The European parties to the deal should know that there is not much time left, and if there is some action to be taken [to rescue the nuclear agreement], it should be done quickly.”

Iran was in compliance of the 2015 international agreement intended to curb its development of nuclear weapons until the US pulled out of the deal in May last year and reimposed crippling economic sanctions.

European signatories to the deal led by France have unsuccessfully sought to find ways to help Tehran evade the US restrictions. Iran is increasing the pressure on Europe to do so, by gradually walking away from its nuclear commitments, including the pledge to refine uranium only using first-generation IR-1 centrifuges.

Kamalvandi said the country had started using IR-4 and IR-6 centrifuges since Friday and would soon test even more advanced models. Officials in the country say an IR-6 can produce enriched uranium 10 times as fast as an IR-1.

Analysts said the announcement was carefully calibrated to highlight the urgency on France and others to help relieve Iran’s ailing economy while avoiding triggering an armed response from the US or forcing Europe to formally abandon the deal.

“These are all very calculated because they do not want to upset the Europeans and make it less likely for them to save the nuclear agreement,” said Holly Dagres, a nonresident fellow at the Atlantic Council who specializes in Iran’s nuclear program and its relations with the US.

“These are symbolic gestures to say: ‘Time is running out, this deal is hanging by a string, you need to do something’.”

Elements in Iran have been accused of trying to sell oil to Syria in breach of UN sanctions, leading earlier this year to the seizure of a tanker carrying approximately $100m (£81m) worth of oil thought to be headed for a Syrian port.

The seizure of the vessel is believed to have led Iran to capture a British-flagged ship, the Stena Impero, by the country’s Revolutionary Guards in July. The ship remains impounded though seven crew members were released this week, leaving 16 aboard.

The Iranian tanker, now called the Adrian Darya, was released on the orders of a Gibraltar court in August and was photographed on Friday close to the Syrian port of Tartus, according to satellite photographs released by a US space technology company.

Maxar Technologies Inc said the image showed the tanker Adrian Darya 1 very close to Tartus on 6 September. The ship appeared to have turned off its transponder in the Mediterranean west of Syria, ship-tracking data showed. The tanker sent its last signal giving its position between Cyprus and Syria sailing north on Monday afternoon.

Iran’s coast guard seized another vessel on Saturday for allegedly smuggling fuel in the Gulf and detained its 12 crew members from the Philippines, the semi-official news agency ISNA reported.

Kamalvandi said on Saturday the International Atomic Energy Agency, the UN’s nuclear watchdog, would continue to be allowed to monitor Iranian nuclear sites and that it had been informed about Iran’s “new nuclear steps”.

But he set a 60-day deadline for France, Germany, and Britain to find a solution to the US sanctions, after which further nuclear escalation could follow.

“When the other sides do not carry out their commitments, they should not expect Iran to fulfill its commitments,” Kamalvandi said.

Reuters contributed to this report