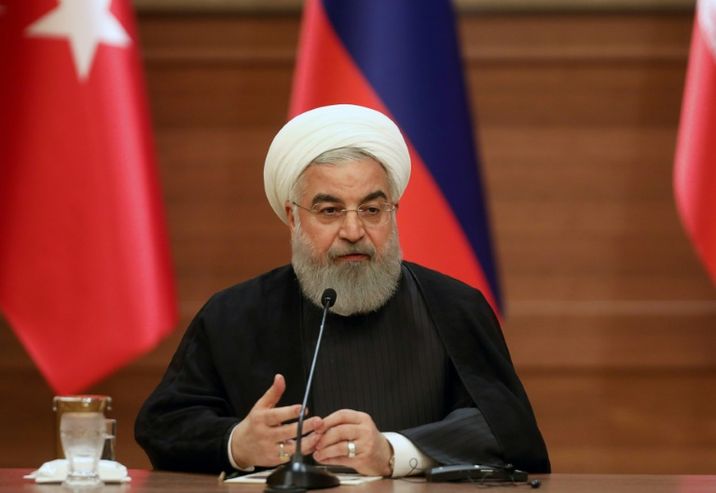 Iran’s President Hassan Rouhani rejected any hopes of rewriting a nuclear deal with world powers Wednesday, after the leaders of the United States and France called for a new pact covering Tehran’s missile programme and regional interventions.

“We have an agreement called the JCPOA,” said Rouhani in a fiery speech, using the technical name for the 2015 deal that curbed Iran’s nuclear program in exchange for sanctions relief.

“It will either last or not. If the JCPOA stays, it stays in full.”

He was responding to statements in Washington by French President Emmanuel Macron and his US counterpart Donald Trump, in which they proposed a new deal with tougher restrictions on Iran.

Trump called the existing accord “insane” and “ridiculous”, despite European pleas for him not to walk away, and demanded fresh curbs on Iran’s ballistic missile programme and support for militant groups across the Middle East.

Macron said the new agreement should include a settlement on Syria, where Iran backs President Bashar al-Assad.

In Iran, Rouhani responded by ridiculing Trump, saying: “You have no expertise in politics, nor in law, nor in international accords.

“A tradesman, a businessman, a high-rise builder, how can he judge about global issues?” 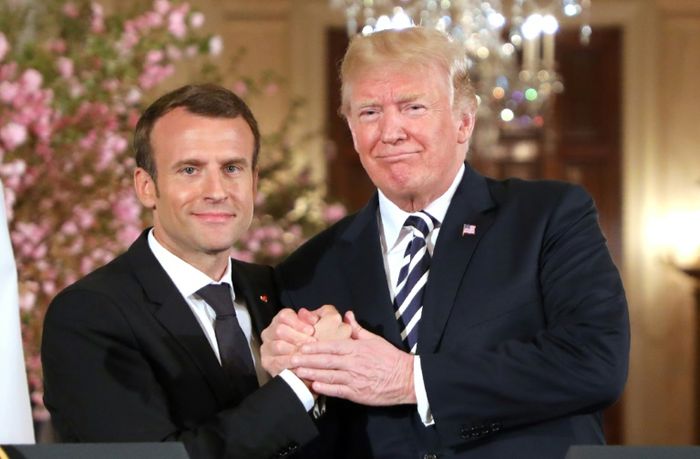 Macron and Trump called for a “new” deal on Iran

Iran has the support of all other parties to the accord, who say it is working and Tehran has stuck to its commitments.

On Wednesday, EU diplomatic chief Federica Mogherini insisted the deal must be maintained.

“On what can happen in the future we’ll see in the future, but there is one deal existing, it’s working, it needs to be preserved,” the former Italian foreign minister said as she arrived for a donor conference on Syria in Brussels.

Moscow also reiterated its support, with Kremlin spokesman Dmitry Peskov telling reporters: “We believe that no alternative exists so far” and demanding that Iran be involved in any further discussions.

Macron, who has built a warm rapport with Trump, has positioned himself as an emissary for European officials seeking a compromise that allows the mercurial US president to claim a public victory, while keeping the deal intact.

But he admitted after meeting Trump that he still did not know whether the US president would walk away from the nuclear deal when the next deadline for renewal comes up on May 12.

Trump — true to his background in reality TV — teased his looming decision.

“This is a deal with decayed foundations. It’s a bad deal, it’s a bad structure. It’s falling down,” the US leader said. “We’re going to see what happens on the 12th.”

Putting on a brave face, Macron said he wished “for now to work on a new deal with Iran” of which the nuclear accord could be one part, but neither leader indicated what Iran might get in return. Iran, meanwhile, has warned it will ramp up enrichment if Trump walks away from the accord, prompting a blunt warning from the US leader.

“They’re not going to be restarting anything. If they restart it, they’re going to have big problems, bigger than they ever had before. And you can mark it down,” Trump said.

Trump had earlier said his predecessors should have made a deal that “covered Yemen, that covered Syria. No matter where you go in the Middle East, you see the fingerprints of Iran behind problems.”

German Chancellor Angela Merkel is expected to press the case for staying in the agreement again when she visits Washington on Friday.

Macron was also due to appear before Congress on Wednesday, and his entourage told AFP he would address the challenges eroding historically warm Franco-US ties, including economic inequality, climate change, how to tackle terrorism and the rise of nationalism.

The French president’s pomp-filled, three-day visit was not welcomed by one long-time critic of US foreign policy, Oliver Stone, who happened to be in Tehran for a film festival on Wednesday.

Stone told AFP he was “particularly shocked” to see Macron standing alongside President Donald Trump, calling for a revision of the nuclear deal.

“To see this young man, who doesn’t have much of a sense of history or memory of the great traditions of France… was very depressing,” Stone said. Meanwhile, hawkish American officials accuse Europeans — particularly Germany — of putting business interests ahead of security, and of opposing a tougher stance against Iran to safeguard investments in the Islamic Republic.

That charge is sharply rejected by European officials, who are increasingly frustrated at spending time dealing with Trump’s complaints rather than tackling Iran’s behaviour.

The disagreement threatens to plunge transatlantic relations to their lowest point since the Iraq War.

But for now, Macron’s visit has been marked by the exuberant welcome given the French leader as the Trumps rolled out the red carpet for a lavish state visit.