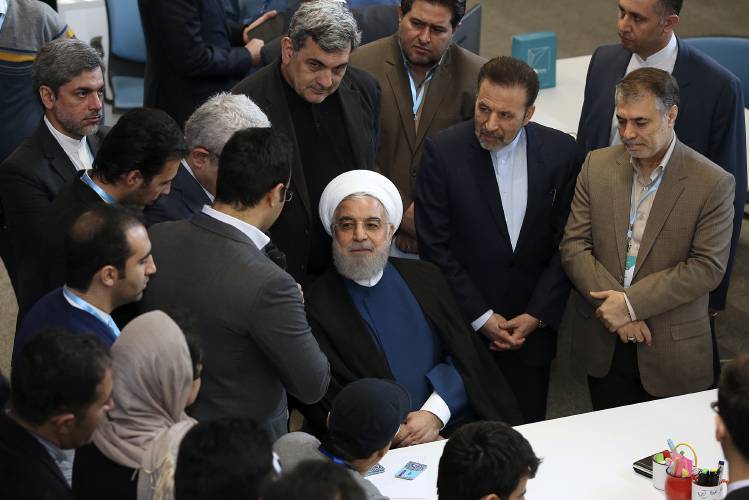 In this photo released by the official website of the office of the Iranian Presidency, President Hassan Rouhani, center, attends a ceremony to inaugurate Azadi Innovation Factory in Pardis technology park in west of Tehran, Iran, Tuesday, Nov. 5, 2019. Rouhani announced on Tuesday that Tehran will begin injecting uranium gas into 1,044 centrifuges, the latest step away from its nuclear deal with world powers since President Donald Trump withdrew from the accord over a year ago. 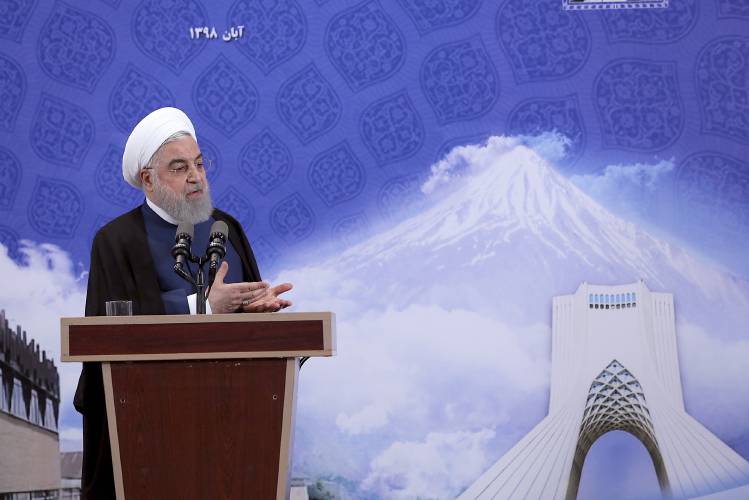 In this photo released by the official website of the office of the Iranian Presidency, President Hassan Rouhani speaks in a ceremony to inaugurate Azadi Innovation Factory in Pardis technology park in west of Tehran, Iran, Tuesday, Nov. 5, 2019. Rouhani announced on Tuesday that Tehran will begin injecting uranium gas into 1,044 centrifuges, the latest step away from its nuclear deal with world powers since President Donald Trump withdrew from the accord over a year ago. 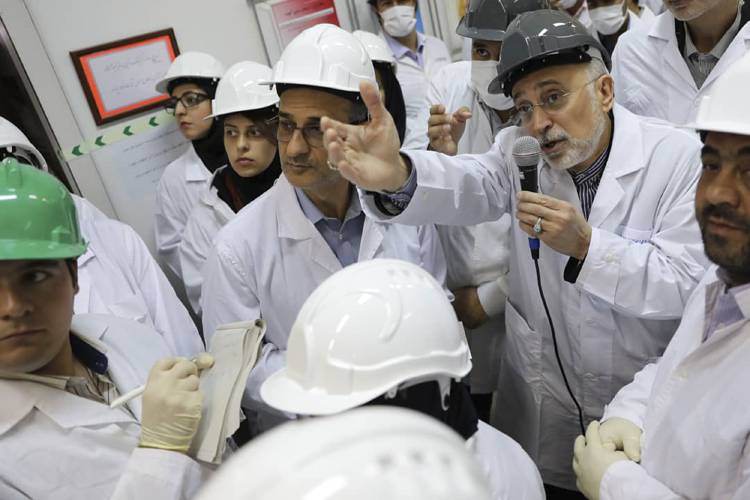 Ali Akbar Salehi, head of the Atomic Energy Organization of Iran, speaks with media visiting the Natanz enrichment facility in central Iran in this photo released Monday by the organization. via ap 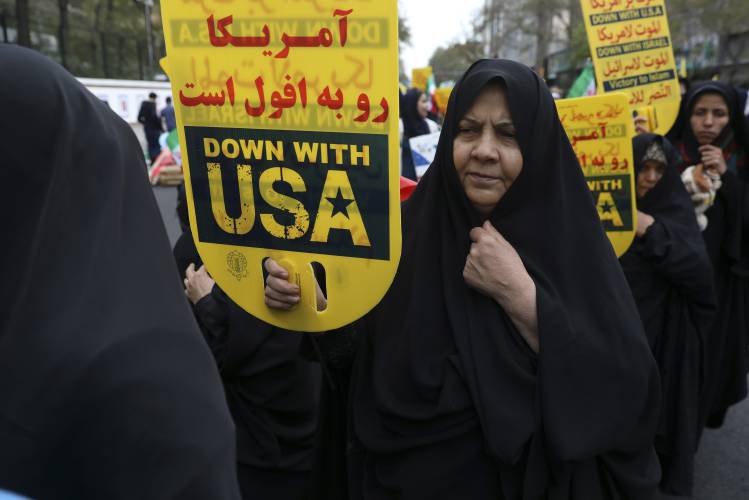 A demonstrator holds an anti-U.S. placard during an annual rally outside the former U.S. Embassy in Tehran, Iran, Monday, Nov. 4, 2019. Reviving decades-old cries of “Death to America,” Iran on Monday marked the 40th anniversary of the 1979 student takeover of the U.S. Embassy in Tehran and the 444-day hostage crisis that followed as tensions remain high over the country’s collapsing nuclear deal with world powers. The Persian on top of the placard is a quotation of the Supreme Leader… Vahid Salemi

TEHRAN, Iran — Iran will start injecting uranium gas into over a thousand centrifuges at a fortified nuclear facility built inside a mountain, the country’s president announced Tuesday in Tehran’s latest step away from its atomic accord with world powers since President Donald Trump withdrew from the deal over a year ago.

President Hassan Rouhani’s announcement means that Iran’s Fordo nuclear facility, publicly revealed only 10 years ago, again will become an active atomic site rather than a research facility as envisioned by the landmark 2015 accord. The State Department announced days ago that it would renew a waiver allowing Russia’s state-run Rosatom nuclear company to continue its conversion work at the site.

The announcement represents a significant development as Fordo’s 1,044 centrifuges previously spun empty for testing purposes under the deal. It also increases pressure on European nations that remain in the accord to offer Iran a way to sell its crude oil abroad. Rouhani threatened to further pull Iran out of the deal in early January 2020, which could mean curtailing international surveillance of its program or pushing enrichment close to weapons-grade levels.

“We are aware of their sensitiveness toward the Fordo facility and those centrifuges,” Rouhani said in a live televised address. “At the same time, we cannot tolerate unilateral fulfillment of our commitments and no commitment from their side“

Experts described Iran’s announcement as a major tear to the unraveling deal.

“They’re getting closer and closer to muscle. They aren’t cutting fat right now,” said Richard Nephew, a scholar at Columbia University who worked on the deal while at the State Department.

Fordo sits some 25 kilometers (15 miles) northeast of Qom, a Shiite holy city and the site of a former ammunition dump. Shielded by the mountains, the facility also is ringed by anti-aircraft guns and other fortifications. It is about the size of a football field, large enough to house 3,000 centrifuges, but small and hardened enough to lead U.S. officials to suspect it had a military purpose.

Iran acknowledged Fordo’s existence in 2009 amid a major pressure campaign by Western powers over Tehran’s nuclear program. The West feared Iran could use its program to build a nuclear weapon; Iran insists the program is for peaceful purposes.

The centrifuges at Fordo are first-generation IR-1s. The nuclear deal allowed those at Fordo to spin without uranium gas, while allowing up to 5,060 IR-1s at its Natanz facility to enrich uranium.

However, Rouhani stressed the steps taken so far, including going beyond the deal’s enrichment and stockpile limitations, could be reversed if Europe offers a way for it to avoid U.S. sanctions choking off its crude oil sales abroad. However, a trade mechanism has yet to take hold and French-proposed $15 billion line of credit has not emerged.

The 2015 nuclear deal, which saw Iran limit its enrichment in exchange for the lifting of economic sanctions, called for Fordo to become “a nuclear, physics and technology center.” Rosatom did not immediately respond to a request for comment about its work there. However, Russia’s Deputy Foreign Minister Sergei Ryabkov said the joint Russian-Iranian project at Fordo would not be affected by Tehran’s latest move.

Dmitry Peskov, a spokesman for Russian President Vladimir Putin, said Moscow wants the nuclear deal to survive though it understood Iran’s anger over the “unprecedented and illegitimate sanctions against” it.

Rouhani’s announcement came after Ali Akhbar Salehi, the head of the Atomic Energy Organization of Iran, said Monday that Tehran had doubled the number of advanced IR-6 centrifuges operating in the country to 60.

Iranian scientists also are working on a prototype called the IR-9, which works 50-times faster than the IR-1, Salehi said.

As of now, Iran is enriching uranium up to 4.5%, in violation of the accord’s limit of 3.67%. Enriched uranium at the 3.67% level is enough for peaceful pursuits but is far below weapons-grade levels of 90%. At the 4.5% level, it is enough to help power Iran’s Bushehr reactor, the country’s only nuclear power plant. Prior to the atomic deal, Iran only reached up to 20%.

The collapse of the nuclear deal coincided with a tense summer of mysterious attacks on oil tankers and Saudi oil facilities that the U.S. blamed on Iran. Tehran denied the allegation, though it did seize oil tankers and shoot down a U.S. military surveillance drone.

As previous steps brought Iran no closer to a new deal with Europe, Fordo could be a “make or break” decision for Tehran, said Aniseh Bassiri Tabrizi, a research fellow at a British think tank called the Royal United Services Institute. Beyond this, Iran can only increase enrichment, limit U.N. surveillance of its program or pressure the region through a “retaliatory approach,” she said.

“It’s a very risky gamble. You know, you’re risking basically an open confrontation with the West,” Tabrizi said. “And that is something that apparently the Iranians are ready to go for.”