The unions have cornered Jeremy Corbyn into agreeing to a second Brexit vote. But, as ever, it’s not that simple. 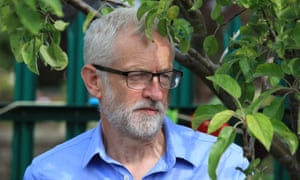 The question is whether Corbyn has left it too late to get the credit for belatedly and begrudgingly doing what much of his party thinks is the right thing.’ Photograph: Peter Byrne/PA

Is Labour really the party of remain, or leave? The official answer for a good three years has been both, which increasingly means in the eyes of many voters it is neither convincingly. The paradox of this week’s otherwise seismic shift in Labour Brexit positioning is that once the dust settles, essentially that’s still true.

Jeremy Corbyn does seem finally to have been cornered into a second referendum on Brexit, with trade union leaders unanimously agreeing this week that if a Conservative government brings any sort of deal (or a firm date for leaving with no deal) before parliament, Labour should demand a referendum on it and campaign to remain.

So it’s a pro-remain party now? Well, not exactly. The unions also agreed that if Labour wins a general election before Brexit has been agreed, Labour should pick up where the Tories left off by negotiating to leave and leave open the option of campaigning against remaining in the ensuing referendum on their own deal. Tory Brexit: bad. Labour Brexit: good, even if it’s remarkably similar to the Tory deal, which seems likely given the narrow economic and political tramlines within which the EU is operating. What matters, apparently, isn’t the principle of Brexit so much as who gets to be in charge of it.

Still, credit where credit is due for those who have fought long and hard to get this far. Labour may at least now avoid the humiliation of being outflanked on the pro-remain side by the likes of Philip Hammond, the Conservative chancellor whose willingness to do whatever it takes to stop no-deal is increasingly evident. The wider Labour movement seems to have successfully asserted itself against the leader’s closest advisers, although it should be said we have all been marched up this hill before only to be marched straight down again. The consolation prize for MPs in pro-leave seats is that they might still get to fight them on a manifesto which, like the last one, commits Labour to leaving. The question is whether Corbyn has left it too late to get the credit for belatedly and begrudgingly doing what much of his party thinks is the right thing.

It is a huge thing to rip up your membership card after 40 years, or even to put a cross against an unfamiliar name on the voting slip. Even in volatile times, it takes a lot for loyal voters to give up on a party and once that Rubicon is crossed, it isn’t so easily recrossed. So while many Labour remainers will simply be relieved to have an excuse to come home, others will want to see more than a graceless volte-face executed in a hurry (and in the middle of another embarrassing row about antisemitism). It may take a rather bigger, bolder break with the recent past before they are prepared to trust Labour again.

Meanwhile, the months of confusion have given the Liberal Democrats both a chance to detoxify and a reason to exist, something they have grabbed with both hands. That genie is not going back in the bottle easily, with whoever becomes the new leader likely to seek every opportunity to embarrass Labour on Brexit. There remains a palpable risk of Corbyn finally catching up with last year’s argument, just as time runs out for a referendum and Westminster moves on to contemplating a potential nightmare choice between leaving without a deal and parliament unilaterally revoking the whole thing.

If there is one thing left on which all Labour factions can agree, it’s a longing to move on from arguing about Europe to discussing the issues sorely neglected as a result of it. But on this evidence, they are likely to be disappointed for a while yet.

• Gaby Hinsliff is a Guardian columnist