On Monday, the president’s lawyers asserted he did nothing wrong and urged the Senate to “swiftly reject” the charges against him. 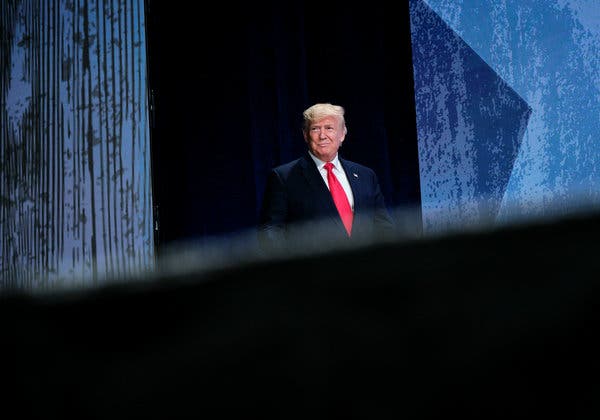 President Trump’s lawyers argue that his impeachment is a “brazenly political act.”Credit…T.J. Kirkpatrick for The New York Times

WASHINGTON — Senator Mitch McConnell, the majority leader, unveiled ground rules on Monday for President Trump’s impeachment trial that would attempt to speed the proceeding along and refuse to admit the evidence against the president unearthed by the House without a separate vote.

Mr. McConnell, Republican of Kentucky, showed his hand hours after Mr. Trump’s legal team called on the Senate to “swiftly reject” the impeachment charges and acquit him, arguing that Democrats would “permanently weaken the presidency” if they succeeded in removing him from office over what the team characterized as policy and political differences.

In a 110-page brief submitted to the Senate the day before Mr. Trump’s trial begins in earnest, the president’s lawyers advanced their first sustained legal argument since the House opened its inquiry in the fall, contending that the two charges approved largely along party lines were constitutionally flawed and set a dangerous precedent.

Mr. Trump’s lawyers dismissed the validity of both articles of impeachment lodged against him — abuse of power and obstruction of Congress — because they do not state any specific violation of the law, advancing a constrained and widely rejected interpretation of the power to impeach a president. While the lawyers did not contest the basic facts of the case, they maintained that Democrats’ accusations in effect seek to punish Mr. Trump for foreign policy decisions and efforts to preserve executive prerogatives.

“They do not remotely approach the constitutional threshold for removing a president from office,” the brief said. “The diluted standard asserted here would permanently weaken the presidency and forever alter the balance among the branches of government in a manner that offends the constitutional design established by the founders.”

The White House also announced on Monday night that it had assembled a team of eight House Republicans to serve as part of the president’s defense team, including some of his fiercest defenders, like Representatives Jim Jordan of Ohio, Mark Meadows of North Carolina and John Ratcliffe of Texas.

Mr. McConnell’s trial rules, which limited each side’s arguments to 24 hours over two days, gave the White House a helping hand at the outset and drew swift anger from Democrats. The rules left open the possibility that the Senate could not only decline to hear new evidence not uncovered in the House impeachment inquiry but could also sidestep considering the House case against Mr. Trump altogether — although such a vote is considered unlikely.

He said he would propose changes during what promises to be a rancorous debate over the rules on Tuesday in the Senate.

In their own detailed legal brief submitted on Saturday, the House impeachment managers outlined their case that Mr. Trump corruptly solicited foreign interference in the 2020 election for his own benefit by pressuring Ukraine to announce investigations into his political rivals while withholding nearly $400 million in security aid the country desperately needed as well as a coveted White House meeting for its president.

“President Trump did not engage in this corrupt conduct to uphold the presidency or protect the right to vote,” the seven House Democratic impeachment managers said Monday in a second filing that rebutted many of the president’s assertions. “He did it to cheat in the next election and bury the evidence when he got caught.”

“Mr. Trump’s answer to the charges offers an unconvincing and implausible defense against the factual allegations in Article I,” the managers wrote. “The ‘simple facts’ that it recites confirm President Trump’s guilt, not his innocence.”

The legal brief filed by Mr. Trump’s lawyers did not deny that the president asked Ukraine to announce the investigations into Democrats, including former Vice President Joseph R. Biden Jr., nor that he withheld military aid that Congress had approved for Kyiv. But Mr. Trump’s lawyers said that he never tied the investigations to a White House meeting or to the security assistance.

They also argued that the president has the right to conduct relations with other countries as he sees fit and that he had valid reasons to raise those issues with Ukraine and withhold the security aid because he wanted to root out corruption there and get other countries to share the burden of providing military assistance.

The lawyers dismissed the notion that doing so was an abuse of power, as outlined in the first article of impeachment, calling that a “novel theory” and a “newly invented” offense that would allow Congress to second-guess presidents for legitimate policy choices.

“House Democrats’ concocted theory that the president can be impeached for taking permissible actions if he does them for what they believe to be the wrong reasons would also expand the impeachment power beyond constitutional bounds,” the brief said. “It is the president who defines foreign policy,” it added and said that Mr. Trump had “legitimate concerns” in raising the issues involving Democrats with the Ukrainians.

The lawyers argued that the second article, accusing Mr. Trump of obstructing Congress by blocking testimony and refusing to turn over documents during the House impeachment inquiry, was “frivolous and dangerous” because it would invalidate a president’s right to confidential deliberations in violation of the separation of powers.

In making their case, the White House lawyers themselves embraced novel interpretations of the history of impeachment. Far from newly invented, the concept of abuse of power was envisioned by the framers from the start. Alexander Hamilton specifically described impeachment as a remedy for the “abuse or violation of some public trust.”

Moreover, the House Judiciary Committee adopted articles of impeachment accusing both Presidents Richard M. Nixon and Bill Clinton of abuse of power for, among other things, defying congressional demands for information.

Many constitutional scholars have long said that impeachable offenses do not have to be specific violations of a criminal code, but could be broader violations of a president’s oath of office or offenses against the republic. In the case of President Andrew Johnson, one of the articles against him alleged no violation of law but impeached him anyway for speeches bringing Congress into “disgrace, ridicule, hatred, contempt, and reproach.”

While the White House brief argued that the articles against Mr. Trump did not allege an actual crime, a report released last week by the Government Accountability Office, an independent, nonpartisan government agency, found that the Trump administration violated the law by withholding the security aid allocated by Congress.

The president’s legal team took issue with the Government Accountability Office’s conclusion and said that, in any case, it was irrelevant because it was not included in the articles of impeachment themselves.

The White House brief stressed that Mr. Trump ultimately met with President Volodymyr Zelensky and released the aid even though the Ukrainians never announced the investigations the president had sought. But the money was delivered and the meeting was set only after a whistle-blower had filed a complaint alleging impropriety by the president and lawmakers had opened their own investigation into why the money had been blocked.

The dueling filings rolled in as both sides braced for a contentious trial on the Senate floor over whether to remove Mr. Trump, only the third such impeachment proceeding in the country’s history. The president visited the Martin Luther King Jr. Memorial in Washington on Monday afternoon before he left for Davos, Switzerland, where he planned to meet with other world leaders at an economic conference as the Senate began weighing his fate.

In the Capitol, the House managers and the president’s defense team took turns privately touring the Senate chamber and surrounding offices, transformed over the weekend into a court of impeachment that will open on Tuesday with the debate on the rules for the trial. According to Mr. McConnell’s timetable, oral arguments by the House managers would begin on Wednesday, followed by a presentation by Mr. Trump’s team.

The White House announcement that it will add House Republicans to its defense team came despite objections from Mr. McConnell. In deference to him, they will not argue the case on the Senate floor but will provide guidance and appear as surrogates, according to a person working with Mr. Trump’s legal team.

In addition to Mr. Jordan, Mr. Meadows, and Mr. Ratcliffe, those joining the team include Representatives Doug Collins of Georgia, Mike Johnson of Louisiana, Debbie Lesko of Arizona, and Elise Stefanik and Lee Zeldin of New York.

In their filing on Monday, House Democrats sought to dismantle the president’s case. By arguing that abuse of power is not an impeachable offense, they said, Mr. Trump’s lawyers were ignoring the intentions of the founders and in effect asserting that “the American people are powerless to remove a president for corruptly using his office to cheat in the next election.”

The managers also said the president’s attempt to justify his obstruction failed to account for the House’s broad prerogative to conduct their inquiry. The House investigation was “properly authorized,” they insisted, and they pointed out that Mr. Trump never actually invoked executive privilege, but merely raised the threat of doing so to discourage officials from testifying.

The nine-page filing was technically a response to a shorter pleading submitted by Mr. Trump’s team on Saturday.

The president weighed in himself, complaining that he had not been treated fairly and dismissing demands by Mr. Schumer for a trial that would include witnesses and testimony that the president has so far blocked.

“Cryin’ Chuck Schumer is now asking for ‘fairness’, when he and the Democrat House members worked together to make sure I got ZERO fairness in the House,” Mr. Trump wrote on Twitter. “So, what else is new?”

Mr. McConnell had said repeatedly that he was modeling his rules on the procedures for Mr. Clinton’s 1999 impeachment trial, but he made changes that could tilt the playing field in Mr. Trump’s favor. While the Clinton-era rules imposed no limits on the 24 hours of oral arguments allowed on both sides, Mr. McConnell condensed them into two marathon-session days, which would allow the Senate to blaze through them by Saturday.

Senators could then pose questions to the two sides next week before debating whether to allow the prosecution and defense to try to call witnesses or seek documents. A senior Republican leadership aide conceded on Monday that Mr. McConnell had deviated from the 1999 rules, which admitted the House impeachment record into evidence at the start of the trial, in requiring a separate Senate vote to do so this time around. The change was necessary, argued the aide, who spoke on the condition of anonymity to detail internal strategy, because the House had denied the president proper due process rights.

The House invited Mr. Trump to mount a defense before the House Judiciary Committee during its impeachment proceeding, including requesting witnesses and documents, but the president’s legal team declined, saying it would not dignify an inquiry it deemed illegitimate with a response.