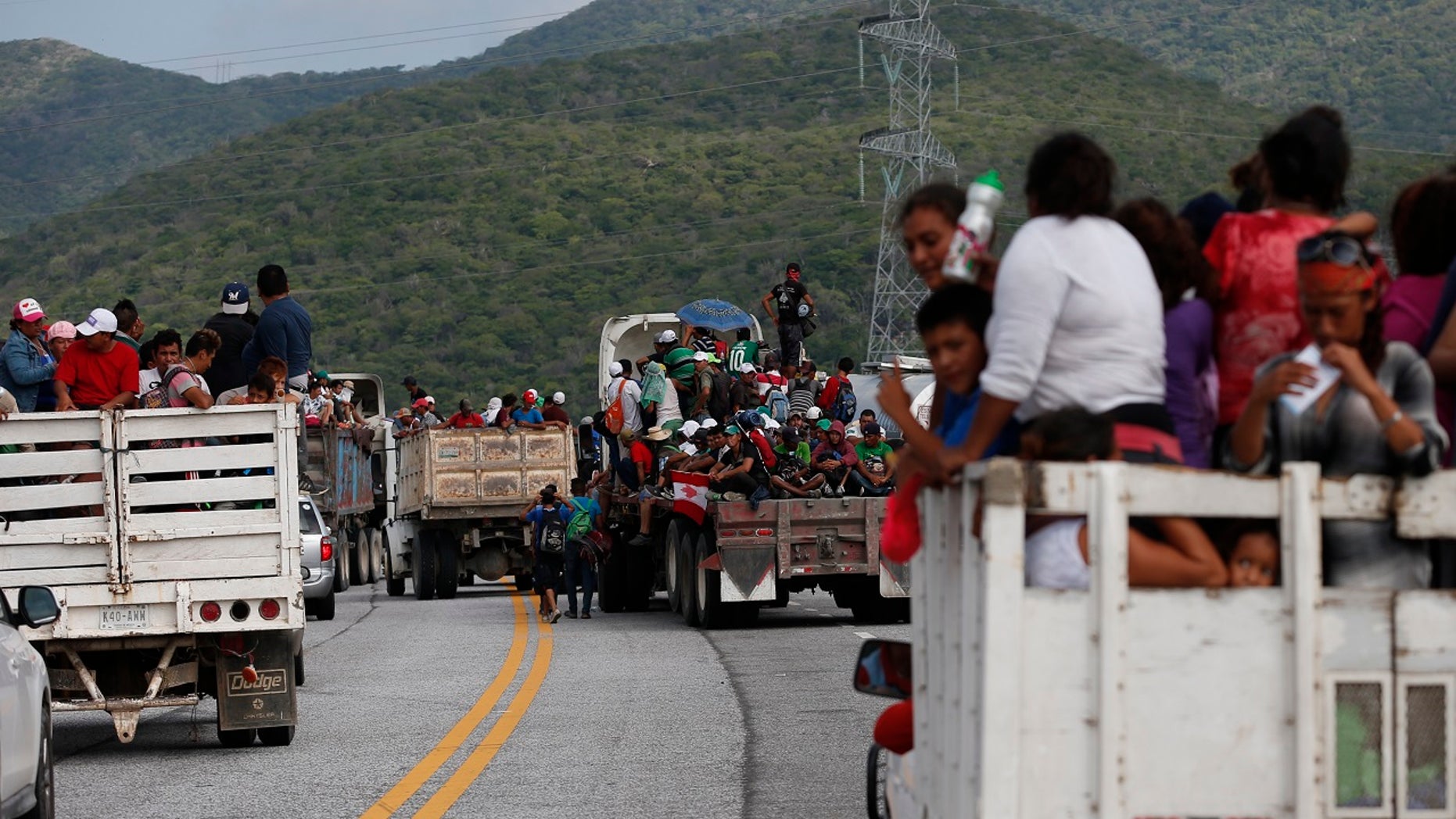 Migrants hitch rides in the back of trucks as the thousands-strong caravan of Central Americans hoping to reach the U.S. border moves onward from Juchitan, Oaxaca state, Mexico, Thursday, Nov. 1, 2018. (Associated Press)

A dozen migrants traveling by foot from Honduras to the U.S. to seek asylum filed a class-action lawsuit Thursday against President Trump, the Department of Homeland Security and others, claiming a violation of their due process under the Fifth Amendment.

The Fifth Amendment states that, “no person… shall be compelled in any criminal case to be a witness against himself, nor be deprived of life, liberty, or property, without due process of law.”

A recent PBS report cited former Supreme Court Justice Antonin Scalia, who ruled in 1993 case that “it is well established that the Fifth Amendment entitles aliens to due process of law in a deportation proceeding.”

Twelve Honduran nationals, including six children, are listed as plaintiffs in the lawsuit. The suit, which was filed Thursday in the U.S. District Court in Washington, D.C., said it is widely known that Guatemala, Honduras and El Salvador are “undergoing a well-documented human rights crisis.” The lawsuit also claims that the plaintiffs’ right to the Administrative Procedures Act and the Declaratory Judgement Act were being infringed upon.

The Central American migrant caravan now numbers approximately 4,000 people, down from a high of 7,200.

The lawsuit points to Trump’s claim that he will prevent the caravan from entering the U.S. It claims that the president cannot stop asylum-seekers by employing the military — when they have a fair claim. The suit criticized the president’s alleged attempt at stoking “fear and hysteria” by claiming that criminals and gang members have joined the caravan.

The suit cited a Trump interview with Fox News’ Laura Ingraham, where the president laid out plans to build tent cities to house migrants. The suit questioned the functionality of such a project, and asked if these living quarters would qualify under the Flores Agreement of 1997. The agreement protects asylum-seekers’ rights and limits how long minors can be held.

Earlier this summer, a federal judge in California rejected a request by the administration to modify Flores to allow for longer family detention. Administration officials say they have the authority to terminate the agreement, but that is likely to be tested in court.

The White House, Department of Justice and the Department of Homeland Security — which were all named as defendants — did not immediately respond to Fox News’ request for comment.

Trump announced in a lengthy speech at the White House on Thursday afternoon that in response to what he called the “crisis at our southern border” and a surge of fraudulent asylum claims in recent years, his administration will soon require asylum-seekers to “lawfully present themselves” at a port of entry.

Asylum claims made by migrants caught crossing the border illegally would seemingly be summarily denied under Trump’s proposal.

The asylum clause of the Immigration and Nationality Act says that anyone who arrives to the U.S. may apply for asylum based on a well-founded fear of persecution, and Trump’s decision was expected to prompt immediate federal court challenges.

“Federal law enables migrants to apply for asylum in the United States. President Trump and his administration have used ‘increased enforcement,’ like separating families and lengthening detention to violate migrant rights,” Mike Donovan, president of Nexus Services, said in the release.

There is another legal issue at stake, according to the lawsuit. The U.S. cannot send troops into Mexico to cut off the caravan from crossing the border, it said. Even with the National Guard at the border, once an immigrant indicates an intention to apply for asylum, the suit maintained the process has begun.

Immigrants who are seeking asylum must be referred for a “credible fear interview,” for which an asylum officer would determine if the immigrant has a “credible fear of persecution,” the lawsuit said. If the officer makes that determination, then there is a significant chance for the asylum-seeker to be granted asylum, according to the suit.