Organizers of demonstrations expected to take place across all 50 states on Saturday are calling for Americans outraged by Donald Trump’s immigration policies and the prospect of a supreme court swinging sharply right to put aside party differences and protest with one voice.

“This is an all hands on deck, stop the madness moment. It’s not a red or blue thing,” the national protest organizer, Ai-jen Poo, told the Guardian.

More than 750 events are planned across the country on 30 June, under the slogan “Families belong together”, to protest against the separation of more than 2,000 children from their parents in recent weeks after they crossed the border illegally under the Trump administration’s “zero tolerance” crackdown.

Poo said the protests were primarily for people who had been horrified at the news of the separations and detentions, but she said the cause would widen into a show of opposition against Trump’s travel ban, which targets five Muslim-majority countries and was upheld by the supreme court this week, as well as the threat of Trump nominating a hard-right conservative for the supreme court seat vacated by Justice Anthony Kennedy.

“What you are seeing is the downright refusal to accept this administration’s policies,” she said.

With the Fourth of July holiday approaching “this is a time when we reflect on where we are as a country and, right now, what we are going to do to take it back as the multiracial democracy we know and deserve”, she added.

Most children have not yet been reunited with their parents despite the president halting the summary separation policy and a judge this week ordering the administration to reunite families.

The largest demonstration is planned for Washington DC, with many thousands expected to gather close to the White House, including Poo, who is a union leader and the director of the national domestic workers alliance, the Hamilton musical creator, Lin-Manuel Miranda, and other figures such as the actor and activist America Ferrera. There will be a rally addressed by a mother who was separated from her child by the border patrol. Mass protests are also expected in New York, Los Angeles, Seattle and other big cities.

“But the beautiful thing about this day is that there are 10 events in Indiana, [vice-president] Mike Pence’s home state, protests in Lubbock, Texas, events in Alabama, rural Pennsylvania and many places like that,” Poo said.

She dubbed the administration’s immigration policy “zero humanity” and “a moral atrocity” and said the main thrusts of Saturday’s events were to demand that families be reunited, call for an end to “zero tolerance” and an end to immigration detention, even where families are kept together.

Beyond the issue of family separations, the attorney general, Jeff Sessions, announced earlier this month that domestic or gang violence, which is rife in many parts of Central America and Mexico, will no longer be regarded as valid reasons for seeking asylum in the US.

The union and the progressive advocacy body MoveOn are the principal organizers of Saturday’s events, along with more than 150 smaller groups across the country. 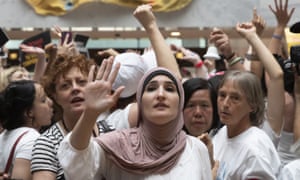 The Women’s March is also an event partner, and its organizer Linda Sarsour is taking part in the planned event in LA, fresh from rallying a mass sit-in over immigration at a US Senate building in Washington on Thursday, at which about 600 women were arrested.

“We need a combination of direct action, mass mobilization and electoral power,” she told the Guardian.

Sarsour said plans for the demonstrations on Saturday had been given new impetus by the news last week that the supreme court had upheld Trump’s travel ban. That news was quickly followed by the announcement that Anthony Kennedy will retire, and is set to be replaced by a conservative, which presages heightened threats to legal abortion and to workers, gay rights and immigration rights.

“I think news of the Kennedy retirement really shook people up,” she said.

Asked if she thought many Trump voters might regret their choice as Republican politics shift further right, she said: “Absolutely.”

“There’s an element of the GOP who are pro-choice women, and moderates who support marriage equality and who realize that on immigration issues, the supreme court will take us back years. The travel ban is rooted in Islamophobia, which the president himself spread during the election campaign,” she said.

She urged maximum “grassroots energy” at Saturday’s protests, and throughout the summer and fall. “This administration is not to be trusted,” she said.