Backlog of claims persists despite number of arrivals almost halving in two years. 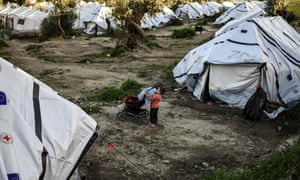 A boy at an unofficial camp on the Greek island of Lesbos. Photograph: Aris Messinis/AFP/Getty Images

Close to 900,000 asylum seekers in the EU are waiting to have their claims processed, according to figures from the European statistics office.

Women, men, and unaccompanied children are living for years in uncertainty, with numbers of pending applications for international protection almost unchanged from two years ago when 1.1 million migrants were “stuck” in the continent.

“Living in limbo is now the norm for those seeking protection,” said Karl Kopp of Pro Asyl, Germany’s largest pro-immigration advocacy organization. “Limbo means living in the miserable Greek EU hotspots or being trapped and pushed back at the borders. It means living in the desperate search for protection and human dignity.”

Eurostat figures have revealed a backlog of 878,600 requests at the end of 2018, with Germany having the largest share of pending requests (44%), ahead of Italy (12%). The figure comes despite the number of migrant arrivals in Europe practically halving in the last two years.

Factors leading to the continuing backlog include new laws from right-leaning governments and an increase in the number of rejections, leading to lengthy appeals processes.

“The vision of governments on the migration crisis has changed and more and more countries are rejecting an increasing number of requests for asylum,” said Fulvio Vassallo, an expert on asylum law from the University of Palermo.

The rejection rate for asylum requests in Europe has almost doubled in three years, from 37% in 2016 to 64% in 2019. In Italy, rejections were at 80% at the start of 2019, up from 60% the previous year as the populist government also removed key forms of protection.

The German Federal Office for Migration and Refugees (BAMF) has in 2019 rejected three-quarters of family reunification requests from Greece, where migrants live in the overcrowded camps of Athens and Lesbos.

“If a migrant has his asylum request rejected, in any case, he is entitled to have recourse to appeal, which, however, lengthens the time waiting in limbo by up to four years,” said Vassallo. “There are migrants who arrived in 2015 and had their asylum requests denied. At that point, they presented an appeal to a court and are still waiting for an answer on their future.”

Experts point out how some governments in recent years, especially in Italy and Germany, have accelerated evaluation procedures for asylum requests, which appears to have caused an increase in rejections because high-speed procedures are not carried out with as much thoughtful evaluation.

“The agenda of the rightwing extremists is now the agenda of the mainstream and all that matters is high speed, few or no rights in the procedure, highest possible rejection rates and increasing the deportation figures,” said Kopp. “Many rejected asylum seekers receive protection only through legal action but years of waiting for the court decision extend the limbo situation in an intolerable way.”

According to Eurostat, since 2014 there have been 3.6m requests for asylum in EU countries, only 1.8m of which have resulted in legal protection. Those who stay after rejection are at risk of suddenly becoming illegal immigrants. “This is the worrying part of this phenomenon, with thousands of people exposed to the risk of a difficult life, at the mercy of labor exploitation,” said Carlotta Sami, a spokeswoman for UNHCR, the UN refugee agency, in Italy.

According to Eurostat, Germany reported the highest number of illegal migrants in 2018, with 134,100. France was second with 105,900. But Italy, where hardline measures are likely to keep increasing the number of illegal immigrants, could soon far exceed them. Matteo Villa, a research fellow for the Italian thinktank the Institute for International Political Studies, said that based on analysis of figures from the interior ministry, “there could be more than 700,000 asylum seekers who will find themselves living irregularly in Italy by 2020”.