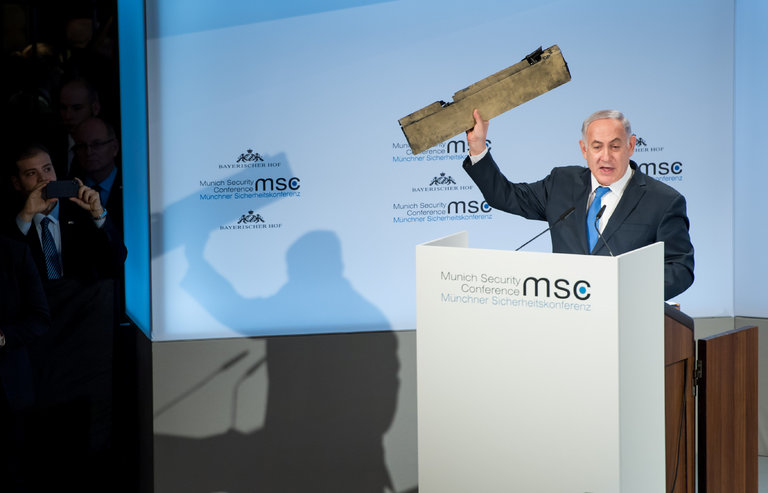 MUNICH — Israel’s prime minister, Benjamin Netanyahu, attending a security conference with international leaders here in Munich, on Sunday brandished what he said was part of an Iranian drone shot down by Israel and warned that he was ready to go to war if Tehran continued to entrench itself in Syria.

Mr. Netanyahu, directly addressing Iran’s foreign minister, Mohammad Javad Zarif, during his speech said: “Do you recognize this? You should. It’s yours. You can take back with you a message to the tyrants of Tehran: Do not test Israel’s resolve.”

He said that if pushed, Israel would act “not only against Iranian proxies that are attacking us, but against Iran itself.”

A few hours after Mr. Netanyahu’s speech on Sunday, Mr. Zarif dismissed the Israeli leader’s warning as a “cartoonish circus which does not even deserve the dignity of a response.”

The Iranian foreign minister accused Mr. Netanyahu of deliberately escalating the situation with “almost daily incursions into Syrian airspace” at a time when he was under pressure at home.

The remarks came just more than a week after the Israeli military had engaged directly with Iranian forces in Syria, striking what Israel said were a number of Iranian targets after intercepting a drone that had penetrated its airspace, then losing an Israeli fighter jet under Syrian antiaircraft fire.

It is believed to be the first Israeli plane lost under enemy fire in decades.

Israel has long warned about the risk of conflict as Iranian forces and their allies, including Hezbollah, the Lebanese militant group, have dug in on Syrian territory and approached the boundary with the Israeli-held portion of the Golan Heights.

Israel has carried out scores of airstrikes in Syria in recent years, focusing largely on what it says are advanced weapons stores or convoys of weapons meant for Hezbollah, and it has also reportedly hit Syrian government facilities involved in weapons development and an Iranian base under construction in Syria.

The Munich conference provided Mr. Netanyahu with a timely opportunity to appear on the world stage in his preferred role as Israel’s security czar and chief guardian against Iran, just days after the Israeli police recommended that he be charged with bribery, fraud and breach of trust in two corruption cases.

The prime minister, who denies all wrongdoing, has responded by lashing out at his and Israel’s enemies and generally conducting his prime ministerial business as usual.

Mr. Netanyahu has long criticized the nuclear deal that was negotiated between Iran and the world’s biggest powers under President Barack Obama and has found an ally in President Trump, who has said he wants to scrap the pact.

On Sunday, Mr. Netanyahu used the conference venue in the Bavarian capital to draw an analogy between the Iran deal and the appeasement of Nazi Germany, associated with a treaty signed here on the eve of World War II.

The Iran deal, he said, had “unleashed a dangerous Iranian tiger in our region and beyond.”

He stopped short of equating Iran with Nazi Germany but drew many comparisons. “Let me be clear, Iran is not Nazi Germany,” he said. “There are many differences between the two,” he said, but, he noted, “there are also some striking similarities.”

He pursued the analogy later in the afternoon, when he visited a memorial to Israeli athletes who were killed by Palestinian terrorists during the 1972 Munich Olympics.

Today, he said, “we have a state and this state has acted, and is acting today, against terrorism and those who would destroy us,” he said.

Mr. Netanyahu had made headlines the day before, when he condemned his Polish counterpart for saying Jews had also been perpetrators in World War II.

The Polish prime minister, Mateusz Morawiecki, faced criticism in Munich for his response to a question about a law that was passed in Poland this month imposing jail terms for those suggesting the country was complicit in the Holocaust.

When an Israeli reporter asked whether he could go to jail for recounting the story of his mother, a Holocaust survivor who was betrayed by her Polish neighbors who gave details to the Nazis, Mr. Morawiecki gave a fumbling response.

“There is a problem here of an inability to understand history and a lack of sensitivity to the tragedy of our people,” he said, adding, “I intend to speak with him forthwith.”

Later on Sunday, Mr. Netanyahu spoke by phone with Mr. Morawiecki and told him that this previous remarks were unacceptable and that there was no basis for comparing the actions of Poles during the Holocaust to those of Jews, according to the Israeli prime minister’s media adviser.

Mr. Netanyahu pointed out that the goal of the Holocaust was to destroy the Jewish people and that all Jews were under sentence of death, the official said. He also told his Polish counterpart that the distortion regarding Poland could not be corrected by means of another distortion. The two agreed that the countries would continue their dialogue on the matter.