North Korea has warned the United States that it may resume new intercontinental ballistic missile (ICBM) tests if progress was not made soon on the countries’ bilateral peace process.

In a commentary published Thursday by the official Korean Central News Agency, a North Korea Foreign Ministry spokesperson accused U.S. diplomats of arriving at recent working-level talks in Sweden with an “empty hand, thus breaking them off.” The two countries have sought a deal by which North Korea would abandon its nuclear weapons in exchange for peace, security and the lifting of international sanctions, but Pyongyang has accused Washington of maintaining a maximalist position and of continuing to take provocative steps, such as last week’s nuclear-capable Minuteman III ICBM test out of California.

“As recognized by the international community, the United States conducted the recent intercontinental ballistic missile test-fire in a bid to pressure the DPRK. The DPRK can give tit for tat, but we are now exercising a restraint under the judgment that a counteraction is not necessary yet and it is still premature,” the North Korean official’s statement read, using an acronym for North Korea’s official name.

“But there is a limit to our patience and there is no guarantee that all our patience would continue indefinitely,” the official added.

The U.S. test, which the Pentagon said “demonstrates the United States’ nuclear deterrent is robust, flexible, ready and approximately tailored to deter twenty-first-century threats and reassure our allies,” came a day after North Korea tested an SLBM off the country’s east coast. The medium-range weapon, officially called Pukguksong-3, is the farthest-flying and first nuclear-capable missile to be tested by North Korea since its own previous ICBM test nearly two years ago.

That test came during a period of heightened tensions between President Donald Trump and North Korean supreme leader Kim Jong Un that lasted throughout 2017 but eventually gave in to both inter-Korean and U.S.-North Korea peace talks the following year. Ahead of his debut meetings with South Korean President Moon Jae-in and Trump, Kim pledged to suspend nuclear tests and longer-range missile launches.

This self-imposed moratorium silenced North Korea’s missiles for nearly a year and a half, but after Trump and Kim’s second meeting failed to produce an agreement in February, two series of short-range weapons tests were conducted in May. Then too, the U.S. conducted a Minuteman III test at Vandenberg Air Force Base, California shortly after the North Korean launch.

As talks again appeared to stall, the two leaders once again came together, this time alongside Moon, for a historic meeting at the border between the two Koreas, still technically a warzone, in late June. As the U.S. and South Korea pressed ahead with joint military drills, however, North Korea began a new series of short-range tests that would last through September.

The Trump administration has mostly brushed off these displays, as well as last week’s SLBM test, acknowledging them as violations of United Nations Security Council resolutions but not commitments made by Kim to the U.S. leader. In response to European condemnations, North Korean officials have repeatedly stated that the country does not acknowledge U.N.-imposed restrictions on its missile program.

Despite this, six European nations including Belgium, Estonia, France, Germany, Poland, and the United Kingdom expressed their “condemnation” toward North Korea’s SLBM test in a joint statement issued after a Security Council meeting. The North Korean Foreign Ministry spokesperson blasted the sextet in Thursday’s statement, accusing them of remaining silent towards the recent U.S. ICBM launch.

“The UNSC which champions fairness and equity picks fault with the just measure belonging to our right to self-defense while keeping mum about the test-fire of Minuteman 3 intercontinental ballistic missile recently conducted by the U.S. This is a serious provocation against the DPRK,” the official said, according to the Korean Central News Agency.

The Europeans had also called for North Korea “to engage in good faith in meaningful negotiations with the United States,” but Pyongyang and Washington exited their Stockholm talks with diverging messages of what transpired behind closed doors. 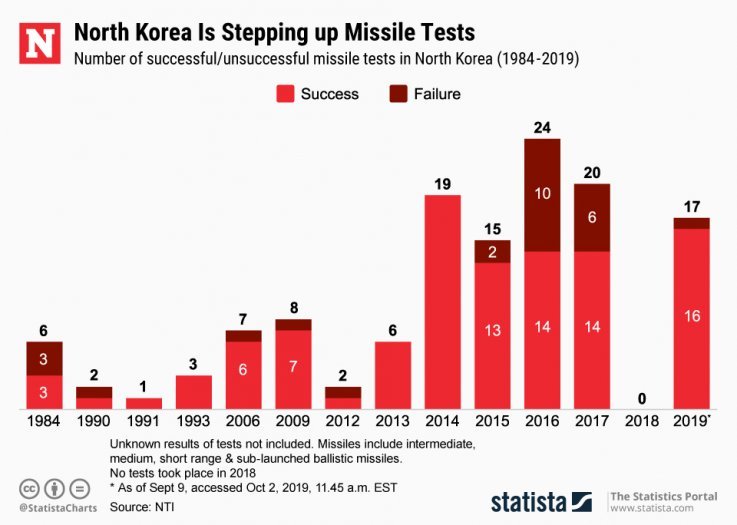 A graphic shows a broad overview of missile tests carried out by North Korea since 1984, based on data compiled by the Nuclear Threat Initiative. North Korea has demonstrated more advanced missile technology with a higher success rate in recent years.  Source: Statista

North Korean chief negotiator Kim Myong Gil told reporters that “the negotiations have not fulfilled our expectations and finally broke up” because “the U.S. would not give up their own viewpoint and attitude.” The State Department, however, argued that his comments “do not reflect the content or the spirit of today’s 8 1/2 hour discussion” and argued that the U.S. “brought creative ideas and had good discussions with its DPRK counterparts.”

“The United States and the DPRK will not overcome a legacy of 70 years of war and hostility on the Korean Peninsula through the course of a single Saturday. These are weighty issues, and they require a strong commitment by both countries,” it added. “The United States has that commitment.”

A North Korean Foreign Ministry spokesperson hit back with a statement Sunday, accusing the U.S. side of “spreading a completely ungrounded story that both sides are open to meet after two weeks.” The official said the country had “no intention to hold such sickening negotiations as what happened this time before the U.S. takes a substantial step to make complete and irreversible withdrawal of the hostile policy toward the DPRK.”

“We have already made it clear that if the U.S. again fingers at the old scenario which has nothing to do with new calculation method, the dealings between the DPRK and the U.S. may immediately come to an end,” the official added. “As we have clearly identified the way for solving the problem, the fate of the future DPRK-U.S. dialogue depends on the U.S. attitude, and the end of this year is its deadline.”