EXCLUSIVE: The top Republican on the House Intelligence Committee has formally requested that the panel’s chairman, Rep. Adam Schiff, D-Calif., testify in a closed-door setting as part of the impeachment inquiry against President Trump.

Fox News has obtained a letter written by committee Ranking Member Devin Nunes, R-Calif., who demanded that Schiff appear for a deposition in private before lawmakers. 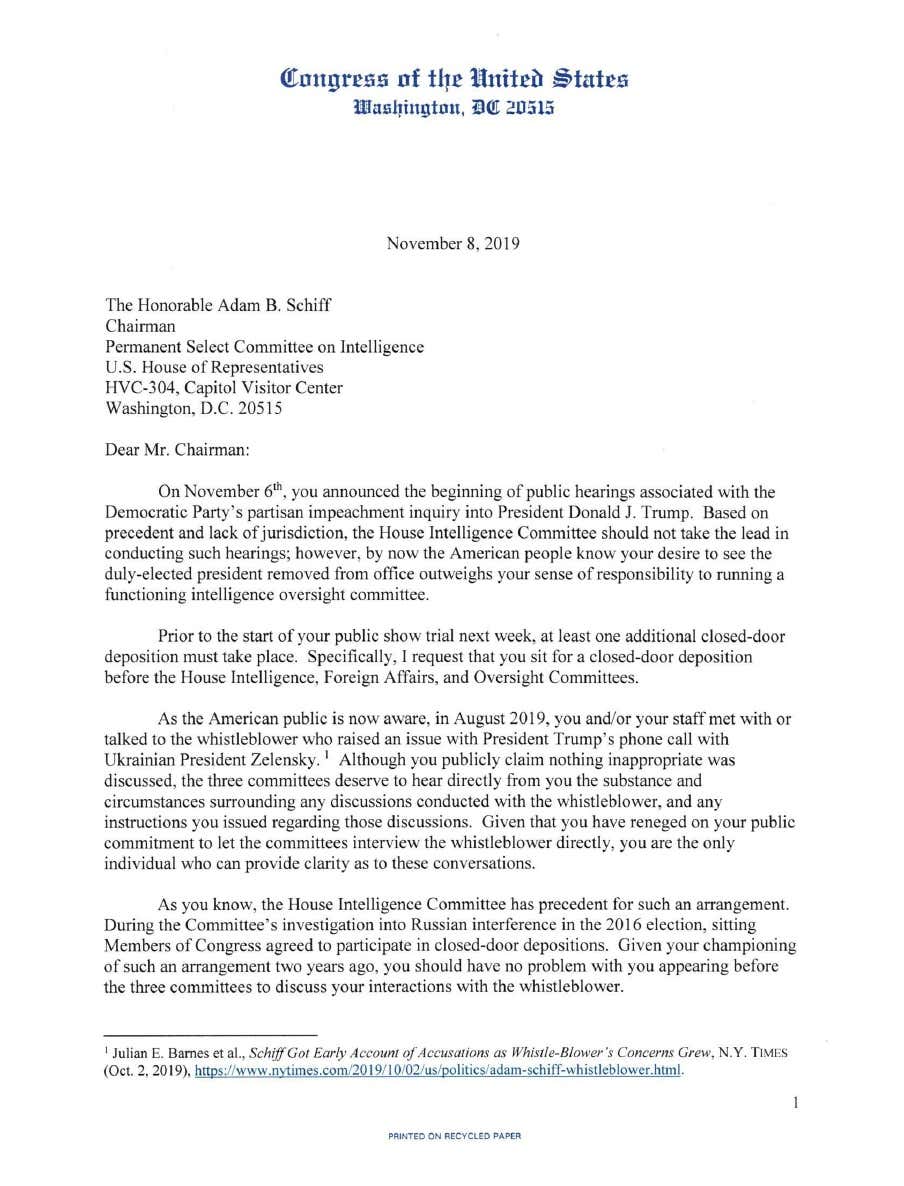 “On November 6th, you announced the beginning of public hearings associated with the Democratic Party’s partisan impeachment inquiry into President Donald J. Trump,” Nunes wrote Friday. “Based on the precedent and lack of jurisdiction, the House Intelligence Committee should not take the lead in conducting such hearings; however, by now the American people know your desire to see the duly-elected president removed from office outweighs your sense of responsibility to running a functioning intelligence oversight committee.

Nunes went on to note that in August 2019, Schiff and his staff “met with or talked to the whistleblower who raised an issue with President Trump’s phone call with Ukrainian President [Volodymyr] Zelensky.”

“Although you publicly claim nothing inappropriate was discussed, the three committees deserve to hear directly from you the substance and circumstances surrounding any discussions conducted with the whistleblower, and any instructions you issued regarding those discussions,”  Nunes wrote. “Given that you have reneged on your public commitment to let the committees interview the whistleblower directly, you are the only individual who can provide clarity as to these conversations.”

He added: “As you know, the House Intelligence Committee has precedent for such an arrangement. During the Committee’s investigation into Russian interference in the 2016 election, sitting Members of Congress agreed to participate in closed-door depositions. Given your championing of such an arrangement two years ago, you should have no problem with you appearing before the three committees to discuss your interactions with the whistleblower.”

Schiff maintains that he has not personally spoken with the anonymous whistleblower. However, it was revealed several weeks ago that the whistleblower had early contact with his office, essentially giving them a heads-up about the complaint concerning Trump’s July 25 phone call with Zelensky.

Meanwhile, Republicans are expected to release a full list of proposed witnesses for testimony in a public setting in the coming days.

Nunes’ and Republicans’ effort to devise a strategy going forward comes after the House approved rules for the impeachment inquiry process last week. While Republicans opposed the resolution and complained the rules were unfair, Democrats still gave GOP lawmakers the ability to subpoena witnesses with the concurrence of Democratic committee chairs. If the chair does not consent, the minority can appeal to the full committee.

This process still gives Democrats final say over witnesses. A GOP source told Fox News this week that it’s unlikely Democrats would go along with the efforts to call Schiff — who is essentially leading the impeachment probe.

The source told Fox News that Republicans want answers to questions like: “How many times did he [Schiff] meet with the whistleblower? What did they advise the whistleblower to do? How much was Schiff involved in this? Did he recommend the whistleblower give the complaint to the intelligence community inspector general, even though there was no intel component so that he could be involved?”

But GOP lawmakers for days had telegraphed that they were interested in making the attempt.

House GOP Leader Kevin McCarthy, R-Calif., said Sunday on CBS’ “Face the Nation” that Schiff is the “first-person” who should be brought in, along with his staff.

“Come to the Judiciary Committee,” Collins said after the passage of the impeachment rules resolution. “Be the first witness and take every question asked of you. Starting with your own involvement [with] the whistleblower.”

Schiff’s office last month said that the whistleblower had reached out to them before filing the complaint in mid-August, giving Democrats advance warning of the accusations that would lead them to launch the inquiry days later. The inspector general’s complaint about Trump’s phone call with Zelensky flagged concerns about efforts to pressure Ukraine to investigate former Vice President Joe Biden and his son Hunter as military aid to the country was being withheld.

A transcript released by the White House shows Trump making that request, but he and his congressional allies deny, and plan to continue to deny, that military aid was clearly linked to the request, or that there was any “quid pro quo.” Some witnesses who have appeared before House committees as part of the impeachment proceedings have challenged that assertion.

Meanwhile, Republicans are also hoping to call the whistleblower to testify, according to the source, who pointed to Schiff’s recent reversal on the issue.

Schiff in September had promised testimony from the whistleblower “very soon.” But in recent weeks has suggested that testimony is unnecessary.

Meanwhile, Schiff announced Wednesday that his committee would hold the first open hearings of the impeachment inquiry next week, featuring current and former officials with knowledge of the Ukraine controversy.