Crude rallied after Saudi Arabia said its oil tankers were attacked on Sunday, adding to the mounting geopolitical risks in the market.

Brent in London added as much as 2.2%. Saudi Arabia said two of its tankers were damaged in “a sabotage attack” while sailing toward the Persian Gulf, though no one has yet claimed responsibility. Separately, China announced it will raise tariffs on some U.S. goods from June 1 following Washington’s decision to increase levies on $200 billion of Chinese goods Friday, escalating a prolonged trade war. 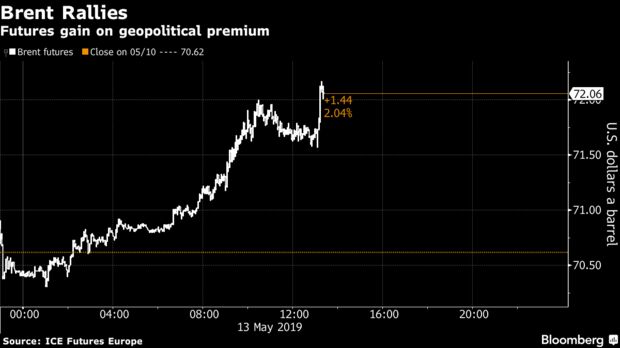 The tanker attacks are a signal of the growing political risk in the oil market since the U.S. ended waivers for crude purchases from Iran earlier this month. Prices had been struggling in recent weeks against a backdrop of increasing trade tensions between the U.S. and China, which damped the macroeconomic outlook. However, the geopolitical risk in the Middle East, coupled with outages from the North Sea to Venezuela, are now buoying prices.

Brent crude for July settlement rose $1.24 at $71.86 a barrel on the London-based ICE Futures Europe exchange at 1:58 p.m. local time. It fell 0.3% last week. The global benchmark is trading at a $9.15 premium to West Texas Intermediate crude.

WTI for June delivery increased 87 cents to $62.53 a barrel on the New York Mercantile Exchange. The contract lost 0.5% last week.

The Saudi tankers were damaged while heading toward the Persian Gulf, the state-run Saudi Press Agency reported. The U.S. has deployed an aircraft carrier, bomber planes and defense missiles in the region amid rising tensions with Iran, which has threatened to block the Strait of Hormuz, the world’s most important choke-point for oil.

Adding to the production concerns was an outage at a field in the Norwegian North Sea last week that affects around 6% of the country’s total oil output. That disruption saw timespreads in the Brent market — a gauge of supply tightness — surge late last week, reaching more than $1 a barrel on Friday.

President Donald Trump on Monday again accused China of backing out of a deal that was taking shape with U.S. officials, saying Beijing reneged on an agreement to enshrine a wide range of reforms in Chinese law. China plans to raise tariffs on some U.S. good from June sent futures on the S&P 500 equity index lower. The Stoxx Europe 600 index was also dragged down.

— With assistance by James Thornhill, and Sharon Cho