Rather than present tough choices and coherent ideas, they are mostly responding to his outrages with empty rhetoric. 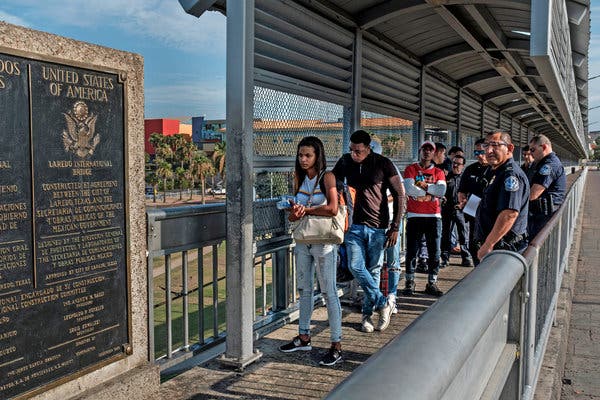 Despite fewer unauthorized immigrants entering the United States than there were a decade ago, immigration is shaping up to be a pivotal topic in the 2020 debate. The crowded field of Democratic candidates for president have rightly called out President Trump for his racist, divisive and often false anti-immigrant rhetoric. But few have offered a compelling policy response to the president — and if they don’t, their failure may help get him re-elected.

Before Mr. Trump’s campaign, immigration was fairly low on voters’ lists of their top issues. Since Mr. Trump’s election, this has changed strikingly: In a Gallup poll of registered voters taken days before the 2018 midterms, immigration tied with the economy as the “most” or an “extremely” important issue, at 78 percent, just below health care. The concern is bipartisan — 74 percent of Democrats and Democratic leaners ranked it similarly near the top.

Mr. Trump understands that these voters represent a ripe target for fearmongering and for extremist policies that play off that fear. At heart, voters have legitimate concerns about undocumented immigration and the possibility of ever-larger numbers of people attempting to cross the southern border. But Democrats’ leading candidates have responded defensively, with rhetoric and policy ideas that are sometimes extreme and incoherent in the opposite direction.

Democrats should also endorse much stronger interior enforcement, although it is more socially disruptive than border control: Roughly half of the 10.5 million undocumented immigrants in America entered illegally, and the other half overstayed their visas and melted into the population. President Barack Obama took interior enforcement seriously, and Democrats today should not apologize for his actions, deriding him as “deporter in chief” — as they too often do on the stump and the debate stage.

Effective interior enforcement means mandating that all employers use an improved, pre-hiring E-verify status check, and occasionally using well-targeted worksite audits and arrests to enforce employer sanctions, which have been on the books since 1986. No administration, Republican or Democratic, has made that a priority. But it could be a winning issue for a smart Democratic candidate appealing to American working-class and union voters.

A harder enforcement choice is whether to apprehend otherwise law-abiding undocumented people in places other than at work. Such a tactic may be unwise or unjust in many cases, and it must be done in a way that does not interfere with community policing. But leading Democratic candidates reject even warranted deportation once undocumented migrants manage to cross the border. Predictably, this stance invites charges that they favor “open borders.” American voters keen to protect our national sovereignty will punish candidates who risk undermining it.

Democrats rightly favor legal status for millions of the undocumented, especially the Dreamers and many of their parents (Mr. Trump favored this, then reneged). Congress should extend this status to other longtime-resident, law-abiding undocumented people. The easiest fix would legalize all long-term, continuously resident applicants who can show good moral character — easy because a statutory remedy dating to 1929 uses a very old eligibility cutoff; it cries out for updating to include those who arrived before, say, 2009.

The United States should also welcome many more new immigrants than the 1.1 million we now admit annually. Democrats should call for an end to the misbegotten “diversity lottery,” which eats up 50,000 precious visas each year, and instead, use those visas for a pilot program for a points-based system like Canada’s (which proportionately admits many more immigrants than we do).

Democrats should call for a return to the norm for refugee admissions of roughly 75,000 to 85,000 a year, from the shamefully low 22,000 admitted per year under Mr. Trump. They should also support some conservatives’ proposals to modernize the larger system, such as reforming the clotted approval process for admitting temporary farmworkers and H-1Bs, and reassessing the troubled investor visa program.

Mr. Trump is determined to deny green cards to legal immigrants who use certain federal benefits. In opposing this, Democrats should be careful to draw defensible lines on welfare entitlements for newcomers, lines acceptable to most Americans who respect immigrants who strengthen our society and are as independent as their circumstances permit.

Rhetoric, then, is not enough, especially when it is simply a retort to the president’s latest outburst. Democrats must convince Americans of their ability to govern wisely in the face of unprecedented pressures on our immigration system. Clichés about America being a diverse nation of immigrants, while true, are not policies — and voters know the difference.

Peter H. Schuck, an emeritus professor of law at Yale and scholar-in-residence at New York University, is the author, most recently, of “One Nation Undecided: Clear Thinking About Five Hard Issues That Divide Us.”

The Times is committed to publishing a diversity of letters to the editor. We’d like to hear what you think about this or any of our articles. Here are some tips. And here’s our email: letters@nytimes.com.

A version of this article appears in print on Aug. 16, 2019, Section A, Page 23 of the New York edition with the headline: Playing Trump’s Immigration Game. Order Reprints | Today’s Paper | Subscribe