Jews and Muslims clashed Sunday morning on the Temple Mount in Jerusalem’s Old City, with police detaining Jewish visitors who had raised an Israeli flag at the outset of what is set to be one of the most politically sensitive and volatile weeks this year.

According to eyewitnesses, a group of Jewish visitors began singing after they entered the site — holy to both Jews and Muslims — on Jerusalem Day, the anniversary of the day when Israeli forces took control of the Old City and Arab-majority East Jerusalem in 1967.

Muslims at the site — known to them as Haram al-Sharif or the Noble Sanctuary — chanted “Allahu Akbar” at the Jews, with police forces separating both groups.

A video showed young Israelis, dressed in blue and white festive clothes, raising an Israeli flag and immediately being confronted by police officers. Another video showed visitors prostrating themselves on the ground in contravention of regulations barring Jewish prayer at the site.

One of the youths was the son of the ultranationalist lawmaker Bezalel Smotrich of the Jewish Home party, who praised his son for his “bravery and national respect.”

“There will come a day, my son, when the Israeli flag will be raised proudly on the Temple Mount, in the Temple,” Smotrich tweeted.

Footage from the scene showed the officers removing members of the Jewish group from the site.

A police spokesperson said that “a number of visitors were removed from area after not keeping to the guidelines of behavior during the visit,” adding that officers were “questioning the individuals who were removed from the Temple Mount.”

The Temple Mount is the holiest site in Judaism and the third-holiest site in Islam. High-profile visits by Israeli officials and rumors of changes to the status quo have preceded outbursts of violence. Under an arrangement in place since Israel’s victory in the 1967 war, non-Muslims are allowed to visit the site but not pray there.

Jews are allowed to enter during limited hours, with police officers guiding them through a predetermined route and forbidding them from praying, displaying religious symbols or raising the Israeli flag.

Security in Jerusalem has been bolstered ahead of a politically tense week that will see Israel celebrate 51 years of the city’s reunification on Sunday, the US move its embassy to the capital on Monday, and the culmination of over six weeks of protests along the Gaza border, when Palestinians mourn the “catastrophe” of the creation of the Jewish state. 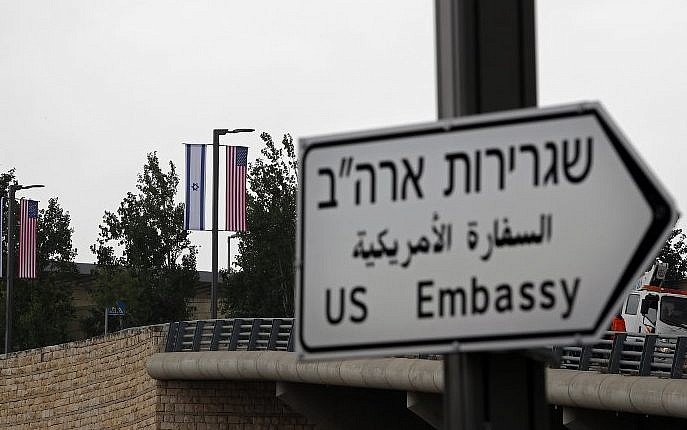 A new road sign indicating the way to the new US embassy in Jerusalem is seen on May 7, 2018. (AFP Photo/Thomas Coex)

Later on Sunday, thousands of Israelis are expected to take part in the annual Jerusalem Day parade celebrating 51 years since the reunification of the city during the 1967 Six Day War.

The march, in which primarily religious teenagers march through the Old City decked in white and blue, the colors of the Israeli flag, has raised tensions over its route through the Old City’s Muslim Quarter. In previous years, the march has sparked sporadic incidents of violence between Israeli revelers and local Palestinian residents.

This year, as in years past, the left-wing NGO Ir Amim sent a letter to authorities requesting that they reroute the march so that it doesn’t go through the Muslim Quarter.

Amid fears that the demonstration could inflame tensions with local Arab residents, a police official told the Ynet news site on Friday that officers would show “zero tolerance for verbal abuse or physical violence” during the event.

He urged revelers to be mindful of the political sensitivities of the march, and to “maintain law and order.” 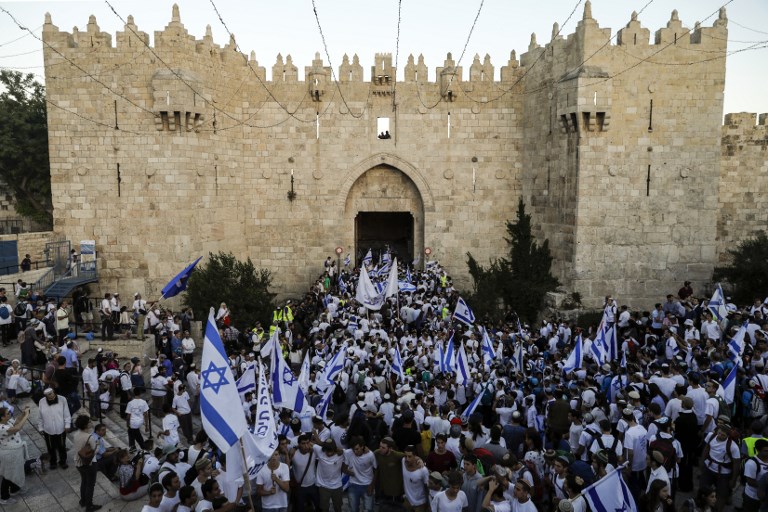 Israelis wave the Israeli flag as they parade through Damascus Gate in Jerusalem’s Old City on May 24, 2017 to commemorate Jerusalem Day, marking the reunification of the city following the Six-Day War of 1967. (AFP PHOTO / Menahem KAHANA)

Thousands of uniformed police and Border Police officers were deployed throughout Jerusalem on Sunday. The officers will secure the perimeter of the US embassy during Monday’s opening, assist in securing the visiting American officials and help direct traffic.

On Sunday, major roads in the city will be blocked between 3 p.m. and 11 p.m. due to Jerusalem Day events. They will include Bar Lev Boulevard and Sultan Suleiman Street around the Old City; Jaffa, Hillel, Bezalel and King George streets near the city center; and Ben Zvi Boulevard, which leads to the city’s main entrance.

Israel is also girding for possible violence during Nakba Day protests, a national day of Palestinian mourning marking the “catastrophe” of Israel’s founding, commemorated every year on May 15. Due to the beginning of the month of Ramadan, protests have been moved up to Monday.

Last week, Hamas’s leader in Gaza Yahya Sinwar said he hoped that hundreds of thousands of Palestinians would breach the border fence from Gaza into Israel during the protests.

In recent Fridays, Palestinian protesters have burned tires along the fence, hurled stones at Israeli troops and flown incendiary kites over dry fields on the Israeli side of the border. Some of the protesters, mainly youths, brandished wire cutters, a popular tool in weekly attempts to cut through the border fence.

According to the Hamas health ministry, 48 Palestinians have been killed since protests and clashes began along the Gaza border on March 30 and hundreds of others have been wounded from gunfire. Israel says it only opens fire when necessary to stop infiltrations, damage to the fence, and attacks.

Israel has repeatedly expressed concern over the possibility of a mass breach of the Gaza fence, in which Palestinians would stream across with terrorists among them, wreaking havoc. Sinwar has vowed in the past that protesters would “breach the borders and pray at Al-Aqsa” mosque on the Temple Mount.