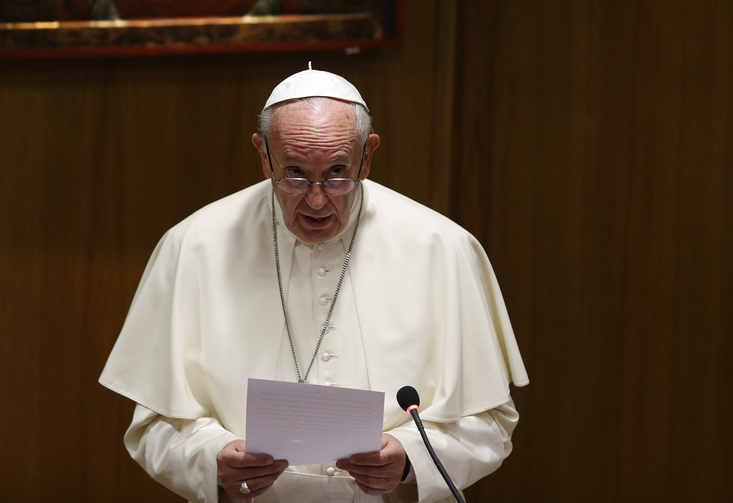 In this 2017 file photo, Pope Francis addresses participants at an encounter marking the 25th anniversary of the Catechism of the Catholic Church at the Vatican.

VATICAN CITY (CNS) — Following through on a proposal made at the Synod of Bishops for the Amazon, Pope Francis said there are plans to include a definition of ecological sins in the church’s official teaching.

“We should be introducing — we were thinking — in the Catechism of the Catholic Church the sin against ecology, ecological sin against the common home,” he told participants at a conference on criminal justice Nov. 15.

Members of the International Association of Penal Law were in Rome Nov. 13-16 for the conference, which centered on the theme, “Criminal Justice and Corporate Business.”

Pope Francis also denounced the abuse of law and legislation to justify acts of violence and hatred.

[Don’t miss the latest news from the church and the world. Sign up for our daily newsletter.]

Today’s throwaway culture, as well as other “psycho-social phenomenon”,  pose threats to the common good while insidiously promoting a “culture of hate,” he said. These threats, he added, often take the form of “symbols and actions that are typical of Nazism.”

“I must confess,” the pope said, departing from his prepared remarks, “that when I hear some speeches, some person in charge of the order or the government, I am reminded of Hitler’s speeches in 1934 and 1936.”

“They are actions typical of Nazism that, with its persecution of Jews, gypsies, and people of homosexual orientation, represent a negative model par excellence of throwaway culture and hate,” the pope said. “That is what happened in that time and today, these things are reappearing.”

Today’s “current of punitivism, which claims to solve social problems through the penal system,” has not worked, the pope said. Instead, an “elementary sense of justice” must be applied so that “certain conduct for which corporations are usually responsible, does not go unpunished.”

Chief among those crimes, he added, are acts that “can be considered as ‘ecocide’: the massive contamination of air, land and water resources, the large-scale destruction of flora and fauna, and any action capable of producing an ecological disaster or destroying an ecosystem.”

Pope Francis also called on the international community to recognize ecocide as a “fifth category of crime against peace.”

According to the Rome Statute, which was adopted by the International Criminal Court in 1998, the four core international crimes currently established are crimes against humanity, genocide, war crimes and crimes of aggression.

“On this occasion, and through you,” the pope told conference participants, “I would like to appeal to all the leaders and representatives in this sector to help with efforts in order to ensure the adequate legal protection of our common home.”

In the synod’s final document, bishops defined ecological sin as a sin against God and future generations that “manifests itself in acts and habits of pollution and destruction of the harmony of the environment.”

A true model of justice, the pope said, can find “its perfect incarnation in the life of Jesus” who, after being treated violently and put to death, brought “a message of peace, forgiveness, and reconciliation.”

“These are values that are difficult to achieve but necessary for the good life of all,” the pope said. “I don’t think it’s a utopia, but it’s a big challenge. A challenge that we must all address if we are to treat the problems of our civilized coexistence in a way that is rational, peaceful and democratic.”