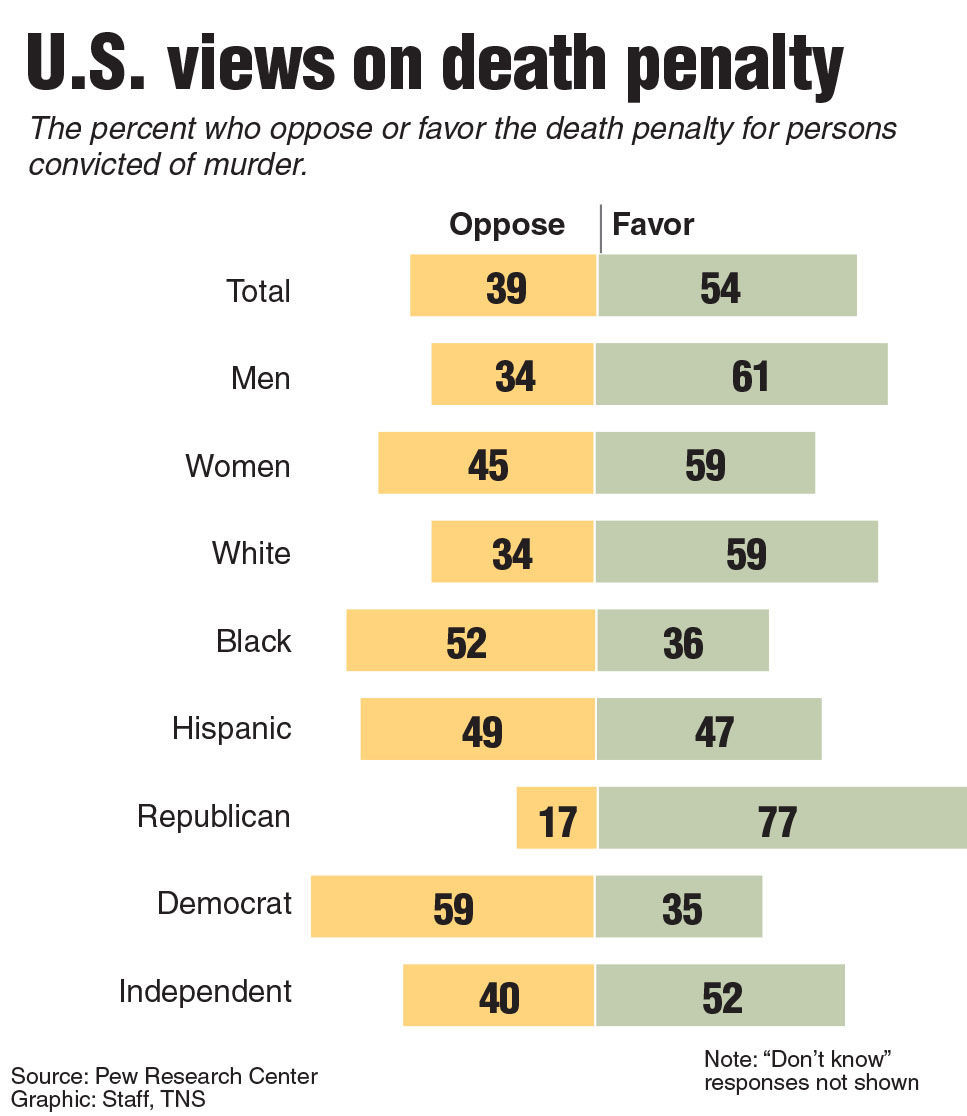 ROME — A new ruling by Pope Francis published Thursday saying that the death penalty is “inadmissible” in all circumstances, and that the church must try to abolish it, may generate opposition by conservative Roman Catholics in the U.S. and other countries.

The Vatican announced Francis had updated the catechism of the Catholic Church — which represents official Catholic teaching — to exclude the death penalty, a move that reflects Francis’ focus on mercy. Before the pope’s update, the church accepted capital punishment under some circumstances, a position supported by many of its more than 1 billion members worldwide.

“Recourse to the death penalty on the part of legitimate authority, following a fair trial, was long considered an appropriate response to the gravity of certain crimes and an acceptable, albeit extreme, means of safeguarding the common good,” the updated section of the catechism says.

It then adds that the church now views the death penalty as “inadmissible because it is an attack on the inviolability and dignity of the person,” and that it will work for its “abolition worldwide.”

Francis has opposed capital punishment for years and his predecessors, Benedict XVI and John Paul II, also argued against it. But Francis decided to leave no room for doubt in the catechism during a meeting this year with Cardinal Luis Ladaria, the head of the church’s Congregation for the Doctrine of the Faith.

The change reflects the “clearer awareness of the church for the respect due to every human life,” Ladaria said in an open letter Thursday. The church wanted to energize the campaign against the death penalty, he wrote.

If the death penalty were once justified to keep the public safe from criminals, jails were now more secure and “the rehabilitation and social reintegration of the criminal” was now a higher priority,” Ladaria wrote.

Father Tom Reese, a Jesuit priest and Vatican expert, said the change is expected to see some opposition from conservative Catholics in the United States.

“The loophole has until now been a reason not to speak up, but the next time there is a horrendous criminal due to be executed, perhaps for a school shooting, bishops will have a duty to say this shouldn’t be done,” he said.

A conservative Catholic blog, Rorate Caeli, tweeted Thursday that Francis was “In open violation of the authority recognized to him,” and that “no Catholic has any obligation of obedience to abuse of authority.”

Father James Martin, a Jesuit priest and author, said the change might “fuel discontent” among U.S. conservative Catholics who are critical of Francis for his emphasis on mercy before rigid doctrine.

“Some people who said any disagreement with the catechism was dissent when Benedict and John Paul were popes seem to feel free to disagree with this now,” he said in an interview.

The change was welcomed by Mario Marazziti, the head of the campaign against the death penalty run by Rome-based Sant’Egidio, which is recognized by the church as a public lay association with tens of thousands of members worldwide.

“Now that the refusal of the death penalty is absolute, conservative Catholics who are pro-life and pro-death penalty will have to start questioning that and decide if they want to respect the pope’s authority or be disobedient Catholics,” he said in a phone interview.

“People like the late Supreme Court judge Antonin Scalia said the death penalty was consistent with Catholicism. Now that becomes impossible,” he said.

“Other Christian denominations believe in retributive justice, taking a fundamentalist approach to the biblical statement about an “eye for an eye,” but Pope Francis believes there is nothing that cannot be forgiven,” Marazziti said.

The death penalty has long divided U.S. Catholics even though church leaders have frequently spoken out against it. A Pew survey this year found that 53 percent of American Catholics supported capital punishment and that 43 percent were against it.

Still, a vocal minority of conservative Catholic priests has argued for putting criminals to death.

“It is a great grace to know the time of one’s death, as it gives us the opportunity to get right with the Lord who will judge us at our death,” McCloskey wrote in a 2015 article. “Perhaps many people have been saved in this way by the death penalty. Who knows what would have happened if they had been allowed to linger in this life, one day possibly killing other people?”

Several U.S. bishops expressed their support of the pope’s decision via Twitter.

Bishop Felipe J. Estevez of St. Augustine, Fla., described the news as one of “hope and consolation” for prisoners on death row.

“Today, our Catholic ministers officially console them with hope for when the day draws near when they no longer will be awaiting for the punishment of death,” Estevez tweeted.