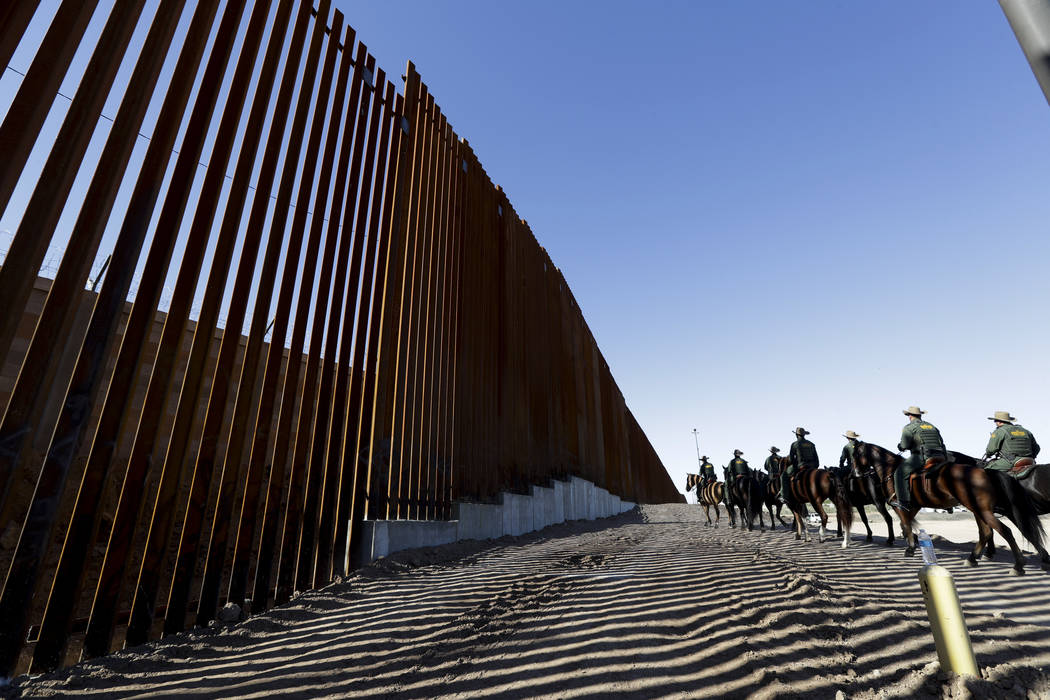 Mounted Border Patrol agents ride along a newly fortified border wall structure on Oct. 26, 2018, in Calexico, Calif. President Donald Trump is visiting Calexico on Friday, April 5, 2019, to tour the recently-built portion of the border fence that bears a silver plaque with his name on it. (AP Photo/Gregory Bull, File)

He failed to push for a vote on a Dream Act, which would have created a path to citizenship for qualified undocumented immigrants who came to the United States as minors. That matter was left for a vote in the lame-duck Congress — and that vote proved to be a gesture as the Democratic Senate failed to garner the needed 60 votes. America will never know how it might have ended if Obama had put his back into it.

Ever since, Obama’s failure to push for this key promise of his 2008 campaign remains an object of contempt among conservatives — who presume Democrats preferred to dangle the issue through the 2012 election and gin up resentment among Latino voters.

With President Donald Trump’s failure to push Republicans to change immigration law when they controlled the White House and both chambers of Congress in 2017 and 2018, Trump may find himself in that same corner of shame.

With 1 million or so undocumented migrants expected to cross the southern border this year, Trump’s commitment to building his signature border wall doesn’t seem to be doing the trick — and he hasn’t focused on measures that actually could improve the nation’s immigration machinery.

When Trump first got into office, a big drop in southern border apprehensions suggested his anti-immigrant campaign rhetoric had such a chilling effect that his promised wall might be superfluous. But then the numbers began to climb.

Homeland Security Secretary Kirstjen Nielsen recently argued that a law that prevents immigration officials from promptly returning minors from the so-called Northern Triangle countries and a court decision that limits how long the government can hold minors serve as loopholes that “create a functionally open border.”

That’s why Mark Krikorian of the pro-enforcement Center for Immigration Studies always has argued that changing immigration law and enforcement would be far more effective than building a wall — not that he’s opposed to spending on a wall.

Trump’s push for the wall shows that he is working to keep his 2016 campaign promise — but it really can’t do much to discourage economic migrants who ultimately would not qualify for asylum but nonetheless believe they will be able to get into the United States through a port of entry.

That’s the problem with Trump’s beloved wall. It may resonate with his base, but it won’t bring about the changes the base wants.

And it’s hard to get Republicans — many of whom do not share Trump’s view on illegal immigrants — to die on a hill for a big-ticket item that the public opposes and politicians doubt will work.

Krikorian doesn’t think it’s too late for Trump to switch his focus to changing the Trafficking Victims Protection Reauthorization Act so that federal officials can send undocumented minors who don’t qualify for asylum back to noncontiguous countries the same way that they can return minors from Mexico and Canada.

Could such a measure make it through the Democratic House? Not now, but that could change if the flow of migrants through Mexico continues at such dangerous levels.

“Politically it is essential for the Republicans to make it clear that (House Speaker) Nancy Pelosi and (Senate Minority Leader) Chuck Schumer are the reason we have this border disaster,” Krikorian said. “They are playing the part of (German Chancellor) Angela Merkel in inviting an unlimited number of people to come to the United States.”

Krikorian believes that the GOP Senate should put its efforts on reworking immigration law so that it doesn’t encourage border chaos.

It doesn’t help when Trump says, as he did Friday morning, that he wants to “get rid of the whole asylum system.” It was another act of verbal self-sabotage that showed an executive ready to bar not only economic migrants but also refugees fearing for their lives.

The week’s antics with the president’s since-retracted threats of closing the border with Mexico only reinforce a portrait of an executive who hasn’t focused on a goal — reducing illegal immigration — so much as on winning.

So Trump claimed victory Friday morning because Mexico has done a better job of enforcing its southern border under his threat. Does anyone think that will last when the mercurial president takes his eye off the ball?

I get how the Trump base cheers on the president’s ability to drive the left crazy with his rhetoric — but it’s not going to fix a humanitarian crisis.