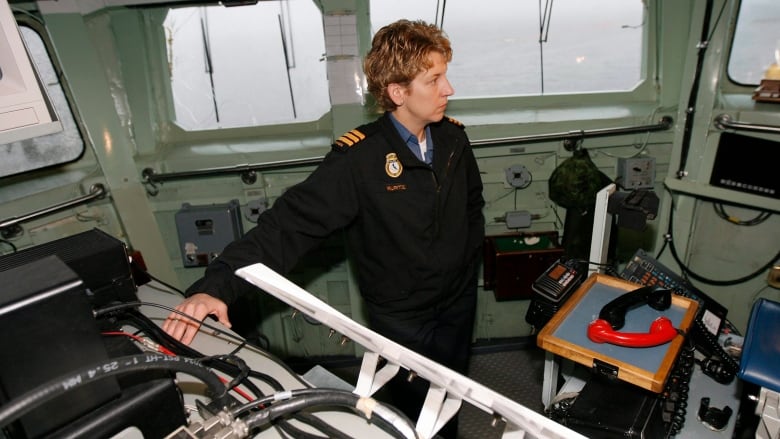 Commodore Josée Kurtz speaks to reporters during a tour of HMCS Halifax in April 2009 at the HMC dockyards in Halifax, N.S., when she was the commander of the frigate – the first woman in the Canadian military to command a warship. (Mike Dembeck/The Canadian Press)

NATO warships faced a stiffer-than-usual test of their mettle by Russian forces during two recent exercises in the Black Sea, the Canadian commander of the alliance’s task force in the region told CBC News today.

Russian ships pressed closer, while their aircraft swooped lower and generally “made their presence obvious,” Commodore Josée Kurtz said in a ship-to-shore telephone interview Wednesday from her new flagship, HMCS Halifax, which recently arrived at a Spanish naval base to relieve HMCS Toronto, her previous command.

“They were willing to test our resolve in passing closer to us,” she said, describing NATO naval drills that took place off the coasts Ukraine and Bulgaria earlier this month.

Kurtz’s remarks came as Moscow announced, through the TASS news agency, that in early August 100 Russian aircraft will take part in military exercises in and around Crimea — which was seized by Russia from Ukraine in 2014 and remains a source of international tension.

Russia reportedly closing off part of the Black Sea

On Tuesday, media reports indicated that Russia intends to close a vast swath of the Black Sea — including a portion in international waters — for live-fire naval drills around the same time.

Kurtz — the first woman to command a Canadian warship and the first woman named as commodore of a NATO task force — said she was unable to comment on those reports, carried online by British media outlets, because NATO Maritime Task Group Two had returned to the Atlantic following the conclusions of Exercise Breeze and Exercise Sea Breeze.

While the alliance warships were in the region, up to 8,000 square kilometers of the Black Sea were declared off-limits as Russian ships conducted their own drills to coincide with what western ships were doing.

“I am aware of some figures that were given in terms of what the Russian Federation has designated as an exercise area for their purpose,” said Kurtz.

“There were some areas of international waters that had been designated as closed, or active exercise areas, for Russian Federation purposes while we were there. But of course, we’re monitoring.” 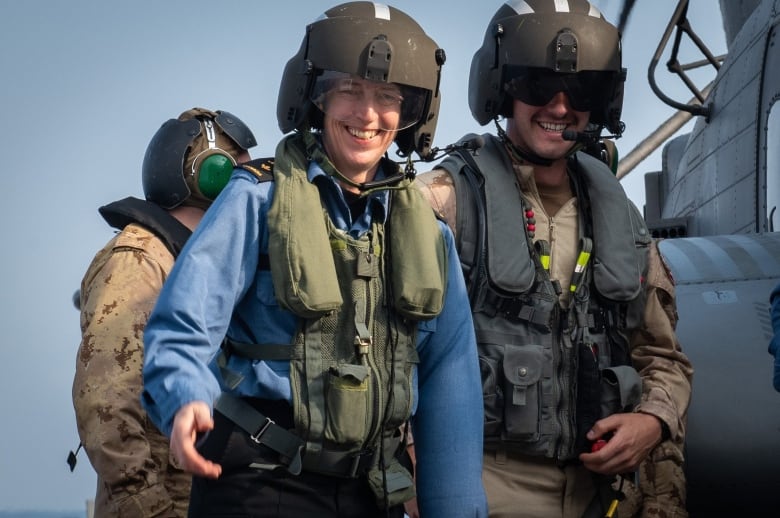 Russian vessels were waiting for the four-ship NATO task force when it entered the Black Sea on July 3 along with American and British vessels.

Throughout its 20 days in the region, Kurtz said, the task force was shadowed constantly — and while the Russians’ behavior could be “qualified as safe and professional,” they came too close to NATO ships several times.

Too close for comfort

She declined to offer specifics, but the Ukrainian navy issued a statement early in the exercise saying the Russian guided-missile destroyer Smetlivy slipped into an area reserved for naval gunfire drills on July 10 — an accusation the Russian defense ministry denied.

On July 27, the Russian air force reportedly intercepted a US Navy P-8A Poseidon maritime patrol plane off Crimea. The incident was captured on smartphone video by the Russian fighter pilot.

The increasing Russian activity in the region also has prompted the U.S. Air Force to temporarily relocate a squadron of MQ-9 Reaper drones from Poland to Romania.

Steve Saideman, a professor of international affairs at Carleton University, said that in the wake of events over the past year, the region is more tense than usual. He cited an incident last November that saw Russian forces fire on and seize three Ukrainian navy patrol boats in the Kerch Strait. The drama surrounding that event took an unexpected turn this month when Ukraine seized a Russian tanker involved in the operation.

NATO made it clear in the spring that it intended to step up its presence off Ukraine. Saideman said he can see how the Russians might view the presence of more western warships on their doorstep as a provocation.

“They are now trying to demonstrate that the Black Sea is their pond,” he said.

Still, he said, he doesn’t believe the situation is about to explode into open conflict — but he warned that the public should expect to see more instances of the sort of close calls and shadow-boxing that have happened in the region over the summer.

“The behavior here does seem to be Cold War-ish, you know,” he said. “They exercise. We exercise. They buzz us. We react to their buzzing.

“It’s very hostile relations and anyone looking for an improved relationship with Russia will have to wait a while longer.”