Nine deaths have been reported after strong earthquakes struck near the border between Turkey and Iran on Sunday.

The first earthquake was reported to be a 5.7 on the Richter scale by the United States Geological Survey (USGS). The epicenter was located in Iran, west of Khoy, and affected villages across the border in the Turkish province of Van. The location of the epicenter of the 5.7 magnitude earthquake that hit eastern Turkey and western Iran on Sunday and the areas estimated to have felt the shaking. (Photo/USGS)

The strongest earthquake of the day hit at around 7 p.m., local time. The 6.0 magnitude quake was centered in about the same area as the first earthquake. Houses are reduced to rubble after an earthquake hit villages in Baskale in Van province, Turkey, at the border with Iran, Sunday, Feb. 23, 2020. Turkish Interior Minister Suleyman Soylu said numerous people have been killed and several others wounded in Sunday’s quake with more people trapped under debris. (IHA via AP)

Shaking was felt across the Van and Hakkari provinces in eastern Turkey.

Residents in Yuksekova, Hakkari, located about 3 miles (4.75 km) from the epicenter, reported the most intense shaking. Buildings made of mud and bricks across this area were damaged and destroyed in the intense shaking. 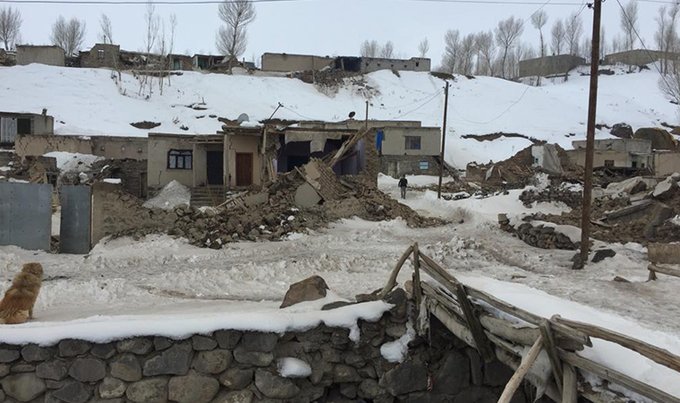 The death toll climbed to nine people as search and rescue teams along with villagers looked through the rubble. Thirty-seven people were injured, nine of which are critical, according to Mehmet Emin Bilmez, the governor of Van. Of the nine fatalities, seven occurred in Ozpinar village in Turkey.

At least three of the fatalities were children, according to Turkish Interior Minister Suleyman Soylu.

Fourteen villages in western Iran have been affected by the earthquake, reported Al Hadath. Villages report damage to homes and barns across the area.

The Disaster and Emergency Management Directorate (AFAD) said 144 tents for families had been dispatched, according to the Associated Press.

A storm system will move into Turkey and spread occasional snow showers into the region by Tuesday, which can disrupt continued search and recovery efforts. Colder air will also arrive with this system, adding further hardships to those left homeless by the earthquakes.

Keep checking back on AccuWeather.com and stay tuned to the AccuWeather Network on DirecTV, Frontier and Verizon Fios.