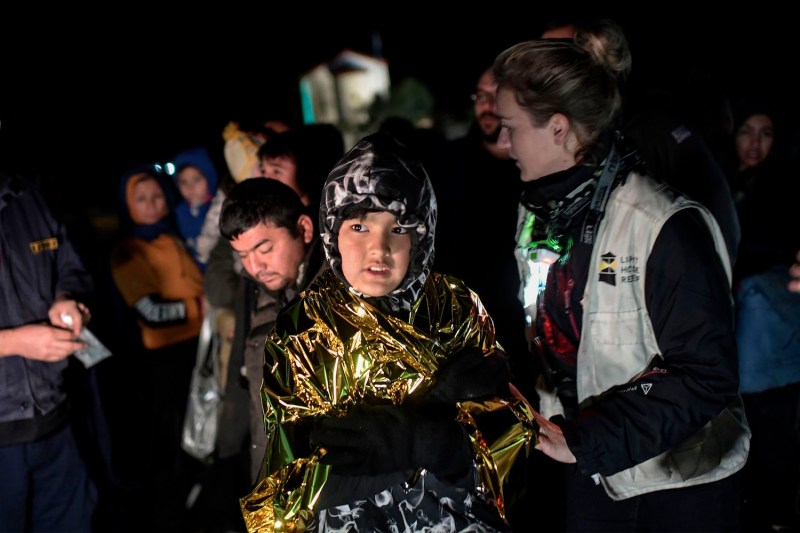 A volunteer helps a young boy following a sea rescue operation near the Greek island of Lesbos on Nov. 27. ARIS MESSINIS/AFP/GETTY IMAGES

In 2015, at the start of the wave of migrants who hit European shores over the next few years, German Chancellor Angela Merkel said that migration and asylum would “preoccupy Europe much, much more than the issue of Greece and the stability of the euro”—the major concern following the 2007-2008 global financial crisis. Four years later, few would argue with her statement. In 2016, British citizens voted to leave the European Union, in part over fears of migration. Across the continent, far-right extremism—likewise fueled by xenophobia—has risen. Worries about Islamist terrorism, meanwhile, have grown. Yet the continent not only lacks a coordinated, humane, and comprehensive policy on immigration, which is only going to become more pressing in the months and years to come but also seems unable to agree on even short-term measures.

It is not possible to forget the images of thousands of refugees fleeing violence ahead of the Islamic State’s conquest of Iraq and Syria. The vast majority of them used smugglers whom they paid off to board overloaded rubber dinghies on the west coast of Turkey. Traveling with a trash bag to hold their belongings and a cell phone to direct themselves, they were unsure whether they would survive the crossing into Greece, let alone to Europe, where they planned to settle.

During a short visit I took to Istanbul, the delegation I traveled with witnessed a group of several hundred refugees who were apparently locked up in a park next to the bus station as the authorities dragged their feet, unsure of what to do with those new arrivals and unwilling to let them move on to the Turkish borders to attempt to make their next move into Europe.

Following months of confusion, uncertainty, and hyperbole, it was to Turkey that the European Union turned to offer a financial deal in March 2016 to keep the refugees and migrants in that country, believing that it would prevent unchecked arrivals into Europe. The deal was unpopular on the left. Aid groups highlighted the issues with sending refugees back to Turkey, in particular, the legal issues associated with the 1951 Refugee Convention. Meanwhile, with a sudden increase in support for right-wing parties, including in Hungary, Austria, and France, there was a growing view that the new arrivals posed a threat to both security and the identity of Europe itself.

Despite the recent outing of Italy’s anti-immigrant interior minister, Matteo Salvini, whose closed-harbor policy effectively banned refugees and migrants from entering Italy, the right’s position—hard borders and limits on integration and resettlement initiatives—generally holds sway. Those on the left of the debate continue to call for open borders, pointing to some evidence that the migrants could bring economic benefits. In Armenia, for example, the government has accepted refugees from the Armenian diaspora. After being integrated, this policy has proved successful in bringing in people with new skills and helping grow businesses across the country.

As the debate continues, real people are suffering. In Libya, the United Nations has described the situation inside detention camps where migrants are held as they attempt to cross the Mediterranean into Europe as “appalling.” In 2017, European Council President Donald Tusk announced that he would close the Central Mediterranean migration route, which in practice has meant that those refugees and migrants seeking to enter Europe via Libya have been stuck in the detention centers. Libyan coast guard boats have intercepted European-bound boats and sent them back to the Libyan detention centers, where refugees and migrants have been denied sufficient food and medical care. Hundreds of those who have tried to cross from the camps to Europe died trying to make the crossing this past year.

Meanwhile, there has been a steady rise in the number of refugees and migrants arriving in Greece. The latest figures indicate that 44,000 asylum-seekers traveled across the Aegean Sea between January and November, an increase of one-third over the 32,500 through all of 2018. Tens of thousands of them live in horrific circumstances in Greek camps. In late October, the Council of Europe’s Commissioner for Human Rights, Dunja Mijatovic, said that the camps are “on the edge of catastrophe” and “explosive.” She estimated that there are 100,000 migrants and refugees living in bad conditions in the country, with a long delay in processing asylum applications.

At the end of October, though, the newly elected Greek government enacted tighter asylum laws, which means people caught in the system will stay there longer. And on Nov. 19, Alkiviadis Stefanis, the Greek deputy defense minister, announced that Athens was shutting the Moria camp on Lesbos to process asylum claims the 15,000 asylum-seekers there. The previous week, Greek police discovered 41 migrants in a refrigerated truck in the country’s north. The incidents are a reminder that for many migrants, the risks are worth the chance to start a new life.

And in the coming months and years, Europe could see even more refugees attempting to get to its borders. Along with the ongoing conflicts in Iraq, Syria, and Yemen, there is a growing realization that climate migration will result in a large influx of people from newly uninhabitable places all seeking to rebuild their lives.

Given the trends, the EU urgently requires a new, coherent policy to both respond to current refugee and migrant issues and to prepare for future influxes. Given the wide spectrum of views, this is not going to be easy. But a failure to do so means more people living in worse conditions and more public resentment than if Europe was successful in integrating migrants.

To be sure, compromises are required. It is clear that there is demand for more resettlement across Europe, rather than just at the points of entry. It seems unlikely that the European Union will agree to such burden-sharing in the short term. So, instead, the EU could at least initiate a debate on four key points.

First, Germany and France, which have been more welcoming to refugees, should both gradually increase the number of refugees they resettle from Libya and elsewhere, while communicating the benefits of this approach to their European neighbors, particularly in relation to the new skills and long-term growth the migrants may offer to their economies. For instance, the International Monetary Fund said in 2016 Germany’s economy would offset the risks from an aging population if it continued to integrate refugees who arrived in the previous years. In September of this year, the two countries, along with Malta, agreed to take in some refugees rescued from boats from Libya.

Second, the European Union and national governments need to urgently increase and improve coordination among nation-states and international bodies and provide additional funding to both national police and transnational bodies such as Interpol. The main routes used by migrants to travel to different countries are generally well known. The EU should provide additional support, resources, training, and intelligence to clamp down on the trafficking networks profiting from migration. In addition to these efforts, the EU and European governments should increase funding to humanitarian organizations helping prevent and treat sexual abuse of women and girls. In addition to the moral and humanitarian arguments, the persecution of refugees and migrants leads to crime and other security threats.

Third, nonstate actors such as nongovernmental organizations, businesses, and city leaders should coordinate to provide effective advocacy for more open borders. Led by agencies such as the International Rescue Committee and city organizations such as United Cities and Local Governments, these nonstate actors see the benefits that migration has in terms of economic growth and diversity. Across the world, refugees and migrants have brought new skills, talents, and innovation wherever they arrive. These skills need to be harnessed.

Finally, the EU needs to move beyond the populist rhetoric of refugees and migrants being “thieves” and “rapists.” A Cato Institute study in 2018 showed immigrants living in Texas illegally were 50 percent less likely to receive a criminal conviction than native-born Americans, while a 2007 paper by the National Bureau of Economic Research concluded that those who arrive in a new country are less likely to commit a crime, in part because they have more to lose. Refugees and migrants will thrive if they are given the opportunity to integrate into, and contribute to, their new society.

Europeans were once crammed into boats headed to the United States and Canada to escape persecution and intolerance. Europe’s governments should reflect on their past to inform and improve their long-term policies. But, in the short term, they need to take small steps to prepare for the future. It is already too late for the many who have failed in their attempts to find a better life for themselves and their families.

James Blake is an expert on intelligence, terrorism, and risk management. He has worked on behalf of many multinational companies and advised the International Monetary Fund and International Rescue Committee on international security matters.