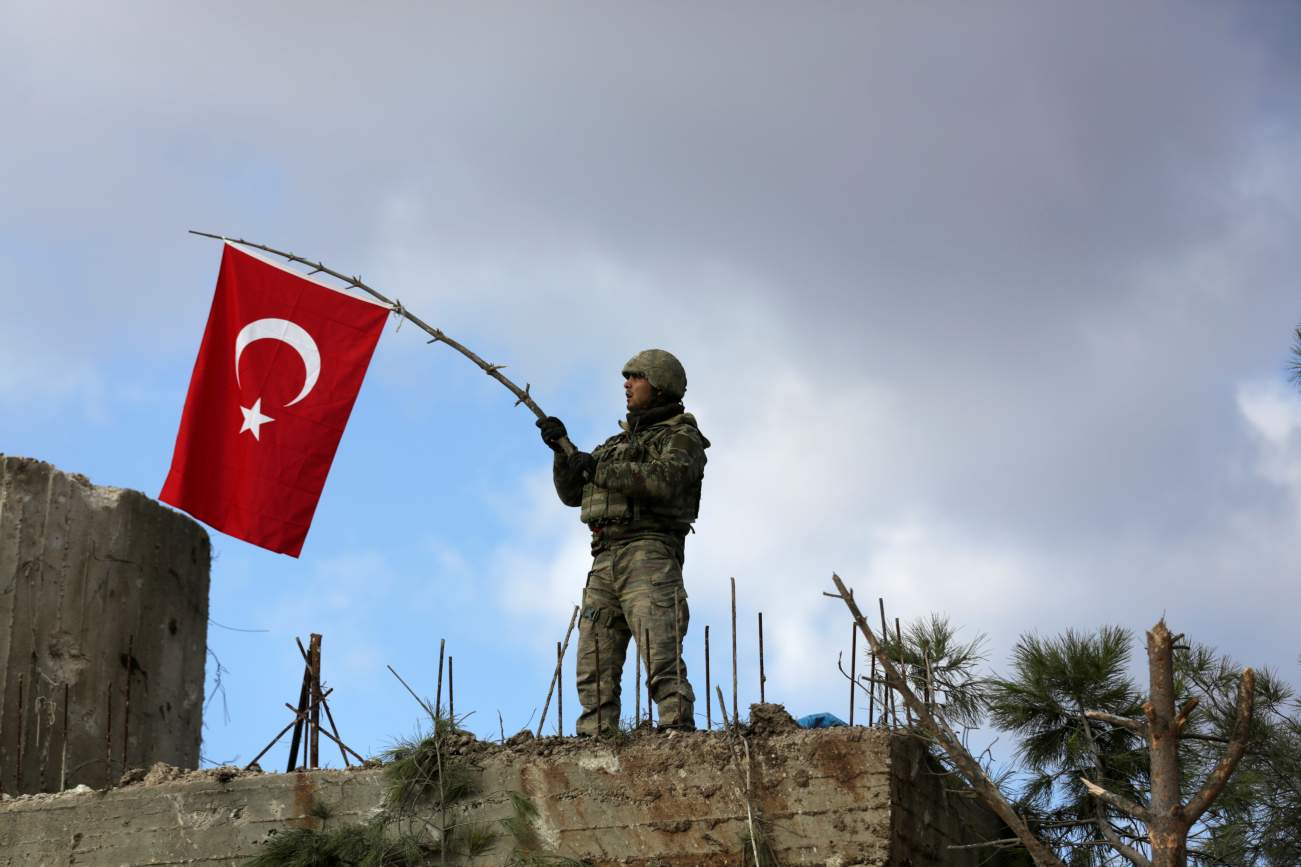 This is an opportunity for Israel and Turkey to recognize a new alignment of interests.

As the brutal eight-year Syrian Civil War winds down, uncertainty over what the future holds for the country is prompting new alliances while testing established ties. Both Israel and Turkey border Syria and have a strategic interest in the postwar settlement that emerges there. While there has been no shortage of disagreements between Israel and Turkey over the past decade, both share a desire to see stability across their Syrian borders. However, each holds a different set of priorities informed by distinct geopolitical and national security exigencies. How this plays out may have far-reaching consequences for stability in post-war Syria and should be of close interest to the United States—a long time strategic ally of both Israel and Turkey.

Through key military cooperation agreements, Israel and Turkey were historically allied since the 1990s in pursuit of a shared goal: to deter the Syrian regime from hostile actions against them by creating a bulwark on its southwest and northern borders. Israel’s limited direct participation in the Syrian Civil War focused on thwarting the Islamic State (or ISIS) threat and the Hezbollah-Iranian presence near its frontier with the Golan and Lebanon. Turkey has been intertwined with the theatre of war at a greater cost. The Turkish Armed Forces conducted two major cross-border ground operations into northern Syria within the span of two years: Operation Euphrates Shield and Operation Olive Branch. Turkey controls Syrian territory in Afrin and its surrounding areas, and has amassed troops along the 566-mile border. Turkey received over 3.6 million Syrian war refugees since 2011, placing a burden on its already overstretched economy and sparking irreversible demographic changes. Israel received none, although it has been concerned that the refuge issue is destabilizing the regime in Jordan. Despite diverging wartime experiences, both Turkey and Israel share overlapping concerns about future stability in Syria.

First, a key shared goal is curbing the maneuverability space of armed non-state actors and militia groups. Indeed, in a Facebook post in March 2013, Prime Minister Benjamin Netanyahu explained that one motivation behind his apology to Turkey’s President Recep Erdogan over the Mavi Marmara incident was the situation in Syria: “Syria is disintegrating, and the huge advanced weapons stockpiles are beginning to fall into the hands of different forces…it is important that Turkey and Israel can communicate with each other.”

According to Gallia Lindenstrauss, a senior research fellow at the Israel-based Institute for National Security Studies, while Syria has not developed into an area for cooperation between Turkey and Israel, neither has it become an area of competition between the two states. This is due mainly to diverging immediate priorities: Israel is focused on conflict triggers in southern Syria while Turkey is interested in the future of northern Syria.

Turkey views the establishment of an autonomous Kurdish region in northeastern Syria as an existential threat and seeks guarantees of the territorial integrity of the Syrian state. Turkey seeks to halt the territorial gains made by the American-backed Syrian Democratic Forces, which is dominated by the People’s Protection Units (YPG), a Syrian militia linked to the Kurdistan Workers’ Party (PKK), an insurgent group the United States and Turkey list as a terrorist organization.

Israel’s support for the independence referendum held in Iraqi Kurdistan on September 30, 2017 put it at odds with Turkey. According to a Turkish foreign-policy expert that I spoke with, Ankara understands the Israeli approach to be “smaller is better” when it comes to its neighbors, meaning that the fragmentation of Syria into statelets or autonomous territories would serve Israel’s national security over a unified and stronger Syrian state.

Turkey’s fears may be exaggerated. Israel’s own experience with cross-border terror attacks means it can fully understand the challenges facing Turkey in Syria. Lindenstrauss adds that given the United States decision to withdraw from Syria, it is unlikely that Israel will take a strong position on the issue of Kurdish autonomy there.

Israel’s priority is dismantling the threat of Hezbollah on its northern border, making it paramount that steps are taken to oust Iranian forces and Shia militias out of Syria. With the winding down of the Syrian conflict, the fear is that eyes will invariably turn back to the group’s stated enemy of Israel. Moreover, as its engagement within Syria diminishes, Hezbollah will likely augment its position in Lebanon.

A related second goal is that Turkey and Israel both wish to limit Iran’s influence in Syria. Israel’s recent raids in Syria, including a September 2018 strike on ammunition depots in western Syria, were a clear signal of Israel’s intention to maintain its military dominance in the region, ignoring fears of backlash from Russia. After an attack on an Iranian arms depot near Damascus International Airport in January, Netanyahu announced that Israeli forces had attacked “Iranian and Hezbollah targets hundreds of times.”

Although Turkey is part of a coalition that supports Iran, it is weary of protracted Iranian influence over Syria, as well as its hegemonic aspirations over the wider region. Turkey has sought to place itself as a check on Iranian expansionism but has encountered setbacks after failing to oust the Assad regime.

The Israeli leadership perceives itself to have few allies in its bid to counter the entrenchment of Iranian-Hezbollah power in Syria. But this is an area where Turkey and Israel share a common interest. According to Nimrod Goren, the head of Mitvim (The Israeli Institute for Regional Foreign Policies), “Israelis tend to overestimate Turkey’s relations with Iran, and Turks tend to overestimate Israel’s relations with the Kurds in northern Syria.” Overcoming misperceptions and building mutual trust—however difficult that may seem in the short-term—will benefit both states as the security architecture of Syria takes shape.

Third, both states support a process of political transition to a postwar settlement. Applying a common pragmatic lens, both Israel and Turkey recognize that Bashar al-Assad has reconsolidated regime authority in territories lost to opposition forces in most of the country and that there are no alternatives to his leadership.

Despite complex shared interests on the future of Syria, as well as cooperation on natural resources, investment and trade, a number of factors at the regional and domestic levels complicate short-term realignment between Israel and Turkey.

The current situation is highly dependent on what Russia has in store for the beleaguered country of Syria. Despite public rhetoric to the contrary, Turkey maintains an uneasy relationship with its Arab neighbors and long-standing rivalries create a historic check on Turkey’s influence. Turkey has tilted toward Russia in recent years in a bid to re-calibrate its foreign-policy isolation that spiked due to its policy missteps during the Arab Spring. To regain strategic relevance over the future of its Syrian neighbor, Turkey continues to edge toward Moscow, a relationship that has tested its longstanding status as a NATO member.

In parallel to Israel’s enhanced relationship with the United States under the Trump administration, it has also cultivated ties with Russia in a bid to check Iranian influence. Putin has significant ties with Russian expatriates and investors within Israel and Israel’s continuing favor toward the Russian Church has warmed bilateral ties. Russia has assured Israel that it will work to deter Iran or Hezbollah from opening a new front with Israel. However, the extent of Russia’s influence over the Assad regime is not straightforward, making any promises to Turkey and Israel far from given.

At the same time, Israel’s relations with the Arab Gulf states has improved considerably in the recent period, and a reduction in anti-Israel rhetoric has signaled a turning point. Israel maintains strong trading relations with many states despite a lack of formal diplomatic relations. Part of this new web of relations is Egypt, which has increasingly been vying to reinsert itself as a regional player. By acting as an interlocutor with Hamas, Egypt has effectively removed a key claim Turkey held as a candidate for peace broker in the Israeli-Palestinian conflict. With Egypt in the picture, Israel has learned it can rely less on Turkey as a middleman to influence the Hamas leadership in Gaza.

Complicating matter further, obstacles to closer ties are ubiquitous at the domestic level in both states. Turkey is under increasing pressure to find ways to correct its economic downturn and recent municipal elections have underlined the divide within opinion across the country. The current AKP administration, preoccupied with domestic stability, may well be tempted to distract its disgruntled heartland through posturing against Israel. At the same time, Israel is riddled with the problems of an increasing unilateral approach to policy making buoyed by the Trump administration, which has degraded Israel’s dovish factions. It is too soon to tell whether the current post-election period in both states will relieve some of the public pressure and encourage cooperation on shared strategic interests.

A further cause of uncertainty is how regional states will react to the looming announcement of the “deal of the century” to resolve the Arab-Israeli conflict, conjured up by chief negotiator and President Donald Trump’s son-in-law, Jared Kushner. Turkey will find it more difficult to work with Israel if the plan spells the end of the two-state solution.

Turkey and Israel have cooperated in the past when mutual interests superseded short-term differences. At the moment, sufficient reasons for closer relations do not appear to exist. A Turkey expert who use to work in Tel Aviv said recently, “Only God knows” what the future holds for Turkey and Israel relations.

However, according to Goren, a scenario where Israel and Turkey launch a channel of policy and strategic dialogue regarding Syria will deliver benefits for both sides that are currently “missing out due to their bilateral crisis.” The ending of the Syrian war will provide a timely opportunity for Israel and Turkey to recognize a new alignment of interests. The United States can play a productive role to bring the two states closer together to facilitate stability in Syria, particularly against growing Iranian influence. It is clear that the most likely outcome is that despite vitriolic rhetoric to the contrary, increasing normalization and cooperation between two powers at security, political and economic levels will become a necessary theme over the next period.