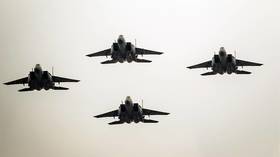 President Donald Trump has expressed his full support for Israel after another escalation in the conflict, when Gaza militants launched hundreds of rockets and IDF responded with massive air strikes.

“These terrorist acts against Israel will bring you nothing but more misery,” Trump tweeted, advising the Gazan people to “END the violence.”

Once again, Israel faces a barrage of deadly rocket attacks by terrorist groups Hamas and Islamic Jihad. We support Israel 100% in its defense of its citizens….

….To the Gazan people — these terrorist acts against Israel will bring you nothing but more misery. END the violence and work towards peace – it can happen!

Disregarding the Israeli use of force against residents of Gaza and the mounting casualties there, Trump stressed that the United States “support[s] Israel 100%” in its defense of its citizens’ against “a barrage of deadly rocket attacks by terrorist groups Hamas and Islamic Jihad.”

At least 18 people were killed in Sunday’s Israeli assault on Gaza, WAFA reported, as the IDF take measures protect its civilians from hundreds of rocket launches by Hamas or Islamic Jihad militants that had escalated on Saturday.

Over 320 “terror sites” had been struck by Sunday evening, the IDF said, after militants from the enclave fired over 600 rockets. At least four people in Israel were killed and at least 10 injured by shrapnel from rockets, missiles and mortar shells from the Gaza Strip, Times of Israel reports.

As Egypt and the European Union reportedly continue to attempt brokering a ceasefire between Israel and the Palestinian groups, the cross-border battle continues. The IDF said it targeted “observation headquarters, underground bunkers, weapons caches, military facilities, launchpads, observation posts and more” in its most recent air raids.