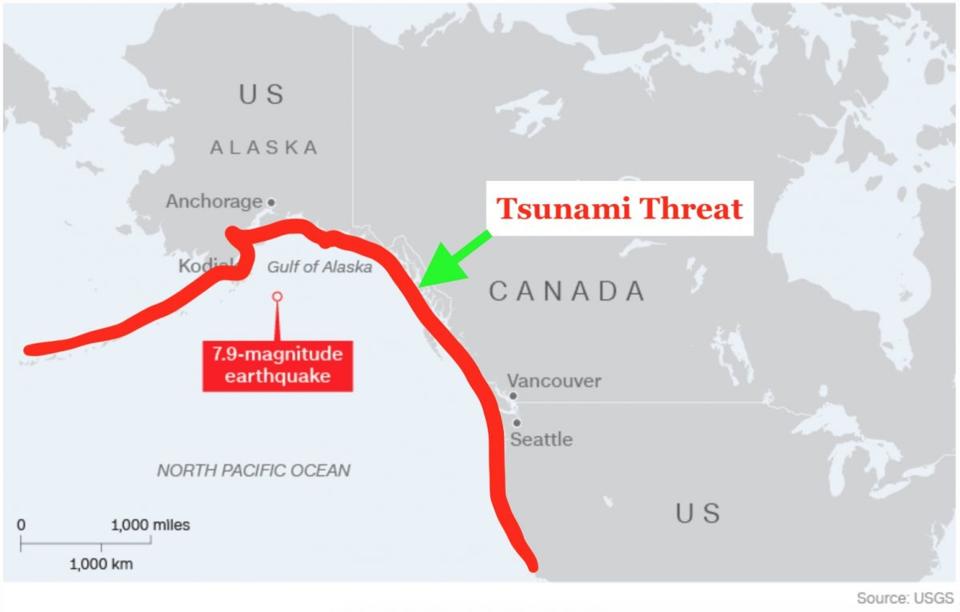 A powerful magnitude-7.9 earthquake hit Alaska early today, sending tsunami warnings across the west coast of North America, from Alaska to Canada and the United States (Washington, Oregon, and California).

Those tsunami warnings are officially canceled after further information and analysis were collated by seismographs across Alaska by the National Tsunami Warning Center in Alaska and the USGS. Alaska did, however, experience minor tsunami waves of approximately 1 foot.

The concern for a tsunami was rooted in the location of the earthquake, which struck off the coast of Alaska in the Gulf of Alaska. The magnitude 7.9-earthquake epicenter was located 175 miles to the southeast of Kodiak, Alaska and deep underwater. The concern was that movement along a fault, which caused this earthquake, would shift water upward and cause a large wave to emanate from the location of the earthquake.

How Do Tsunamis Form Like The One In Alaska Today

You can “model” this scenario in the bathtub or while swimming. Place both of your hands side by side and palm up about 6 inches below the surface of the water. If you suddenly move one hand down and the other hand up, you’ll notice you create a wave that radiates from your hands. That is the same movement which geophysicists fear will create a deadly tsunami. 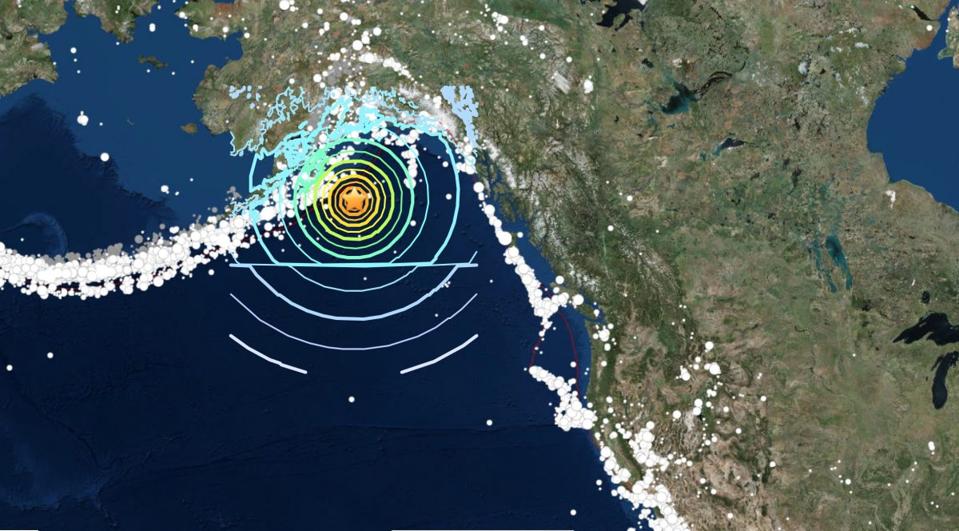 Shakemap with contours from the Alaska earthquake. Noted are historical earthquakes in white bubbles. You can see that the west coast of North America, from California to the Aleutian Islands experience earthquakes at smaller magnitudes regularly.

Thankfully, this particular earthquake, which was centered 15 miles below the surface of the Earth, did not produce a significant tsunami due to the relative motion along the fault which we will discuss below. While the tsunami threat is significantly diminished, officials are warning residents across California, Oregon, and Washington to limit their exposure to the beach for the rest of the day. This is because while there may not be a tsunami, there could be unpredictable currents along the coastlines.

Immediately after the powerful earthquake hit Alaska, fishermen, and residents along coastal Alaska fled to higher ground, evacuating entire towns as tsunami warnings blared over sirens. Police warned that this was not a drill over loudspeakers as people woke from their homes at 1am today. Residents of Kodiak, Alaska went to inland emergency shelters, which opened shortly after the earthquake.

While the earthquake was sufficiently powerful enough to destroy infrastructure, at a magnitude of 7.9, the fact that it was offshore and far away from coastal communities meant little actual damage. In addition, this particular earthquake did not produce a tsunami due to the relative direction of the slippage between the two plates. In this instance, the movement which produced the earthquake was along a strike-slip fault. Using the analogy before with two hands, palm up, 6 inches below the surface of the water. This time, instead of moving one hand up and one hand down, move one hand forward and one hand backward. You’ll notice this doesn’t produce the offset which triggers a wave. This type of fault movement is less dangerous for earthquakes underwater as they are significantly less likely to produce a large tsunami than, for instance, thrust fault movement.

While this tsunami warning wound up not producing a tsunami, the potential for damage and destruction from this powerful of an earthquake is significant. In 2011 a magnitude-9.1 earthquake off the coast of Japan killed more than 20,000 people, caused widespread infrastructure damage, and destroyed nuclear reactors.

Geology Behind The Alaska Earthquake

The earthquake Alaska experienced this morning is along the Aleutian island arc, the chain of islands that extends to the west of Alaska. This island chain marks the location where the Pacific plate is subducting underneath the North American Plate. This subduction causes volcanoes to appear along this boundary and produces the deep Aleutian Trench. The Pacific Plate continues today to be pushed northwest at a rate of approximately 60 millimeters per year.

This subduction zone is the site of the recent earthquake in Alaska. While this area is known for major thrusting movements, thankfully this particular earthquake was a result of strike-slip movement. This is due to transform motion between the two plates as they jostle against one another. The Aleutian Island chain is part of the Pacific Ring of Fire, whereby the Pacific Plate is subducting underneath continental crust in a giant arc from the southern tip of South America, northward, and south to the southwest Pacific. 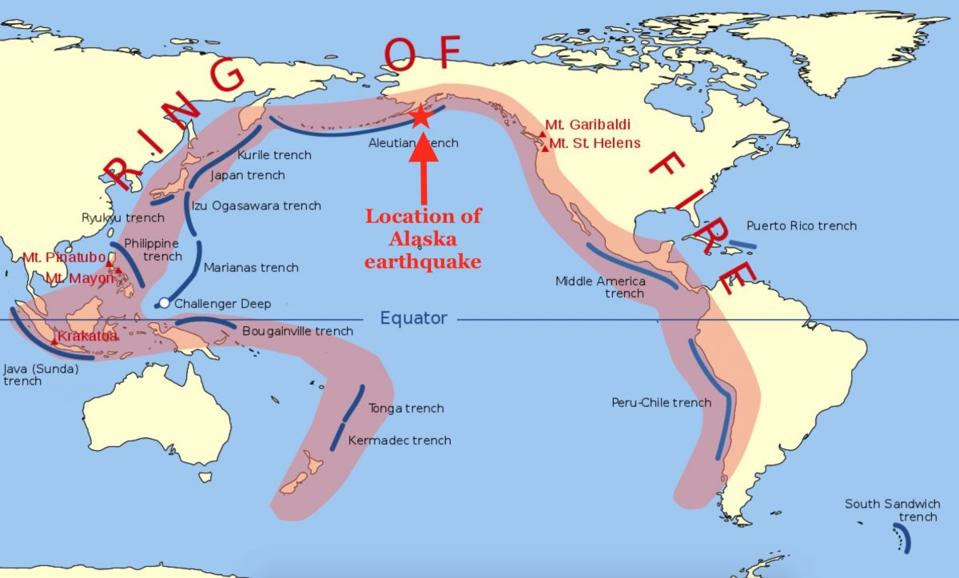 The Pacific Ring of Fire with the location of today’s Alaska earthquake and tsunami warning.

As long as the Pacific Ocean continues to expand at the East Pacific Rise, we will see earthquakes and volcanic activity along the coasts of the Pacific Ocean. The East Pacific Rise spreading is very generally speaking the root cause for everything from the Mount St. Helens eruption to the deadly Japan earthquake of 2011.  In Alaska alone, there have been 12 large earthquakes of magnitude 7.5 or greater since 1900. These large earthquakes are often prone to produce tsunamis and will undoubtedly continue into the future.

Hence the requirement for advanced real-time monitoring of seismic activity. Federal agencies, the United States Geological Survey, in combination with the National Tsunami Warning Center in Alaska, do an excellent job at early detection and warning so residents will have as much time as possible to prepare and evacuate if there is a devastating earthquake and/or tsunami.