‘It doesn’t get any bigger than this’

President Trump signed a landmark trade agreement with China, heralding a period of detente in a trade war between the world’s two largest economies fueled by decades of complaints that Beijing was manipulating its currency and stealing trade secrets from American firms.

The pact, detailed in a 94-page document, is only the initial phase of a broader deal that Trump has said may come in as many as three sections.

“Together, we are righting the wrongs of the past,” Trump said in a pomp-filled signing ceremony. “It doesn’t get any bigger than this.”

The agreement will help grow the U.S. economy in 2020 and 2021 by “at least a half a point of additional GDP” and “probably translate into another million jobs on top of what we’ve already done,” Larry Kudlow, director of the National Economic Council, told FOX News’ “America’s Newsroom” on Wednesday. 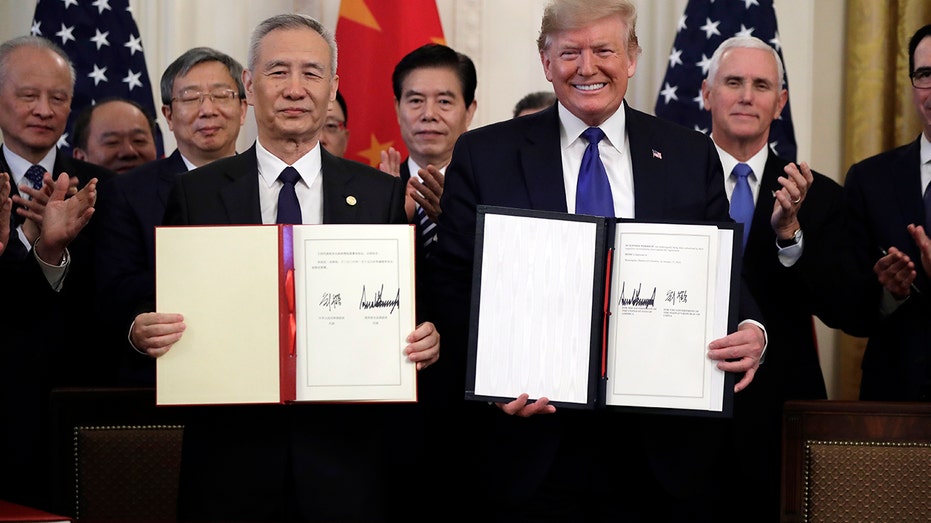 During two years of negotiation, there were occasional setbacks because “on some issues, we don’t see eye to eye,” noted Liu He, the Chinese vice premier who represented President Xi Jinping at the signing, but “our economic teams didn’t give up.”

The agreement, which was first reported on Dec. 12, includes commitments from Beijing to halt intellectual property theft, refrain from currency manipulation, cooperate in financial services and purchase an additional $200 billion of U.S. products over the next two years.

The purchases will include up to $50 billion of U.S. agriculture, according to Trump and Treasury Secretary Steven Mnuchin, $40 billion of which has been confirmed by Chinese sources. China will also buy $40 billion in services, $50 billion in energy and $75 billion to $80 billion worth of manufacturing, the sources said. 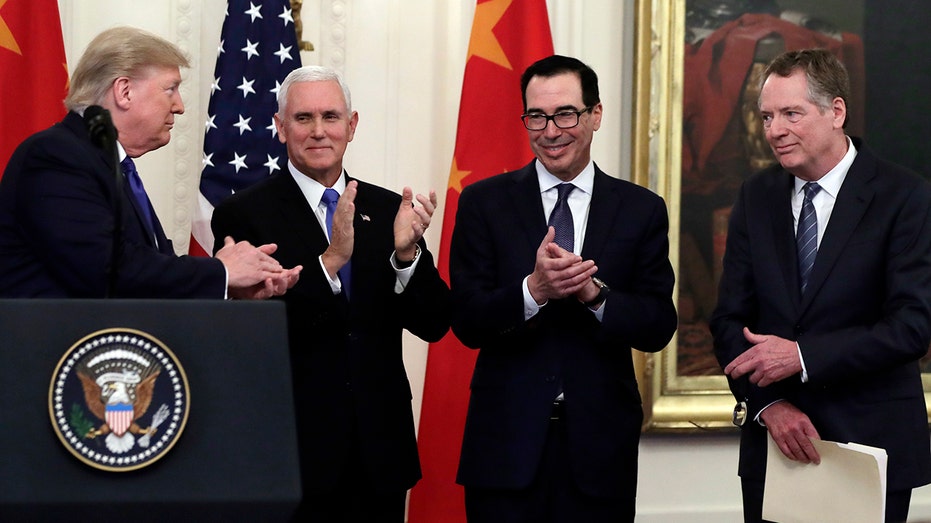 Lighthizer says the deal is “fully enforceable” if Beijing fails to live up to its end of the agreement, and the pact includes mechanisms for handling violations of intellectual property rights. Its dispute-resolution process will allow either side to appeal if it believes the other is “not acting in accordance” with the agreement.

The document specifies that both China and the U.S. “shall ensure fair and equitable market access” for businesses that depend on the safety of trade secrets. Specific measures that will protect pharmaceutical firms’ intellectual property, govern patents, block counterfeiting on e-commerce platforms and prevent exports of brand-name knockoffs are detailed.

In return, the U.S. will reduce tariffs on some products made in China, but keep duties the White House has imposed on $375 billion worth of merchandise. Following the phase-one signing, $250 billion of Chinese imports will still be subject to a 25 percent tariff and $125 billion of Chinese goods will be under a 7.5 percent levy.

“These tariffs will stay in place until there is a phase two,” Treasury Secretary Steven Mnuchin told FOX Business’ Lou Dobbs. “If the president gets a phase two quickly, he’ll consider releasing tariffs as part of phase two. If not, there won’t be any tariff relief. It has nothing to do with the election or anything else. There’s no secret agreement.”

Trump says phase two negotiations will begin “immediately,” though he pointed out Wednesday that China is “doing many more things in phase one than anyone thought possible.”