A year of headlines and parliamentary debates dominated by EU negotiations would be a political disaster for Johnson. 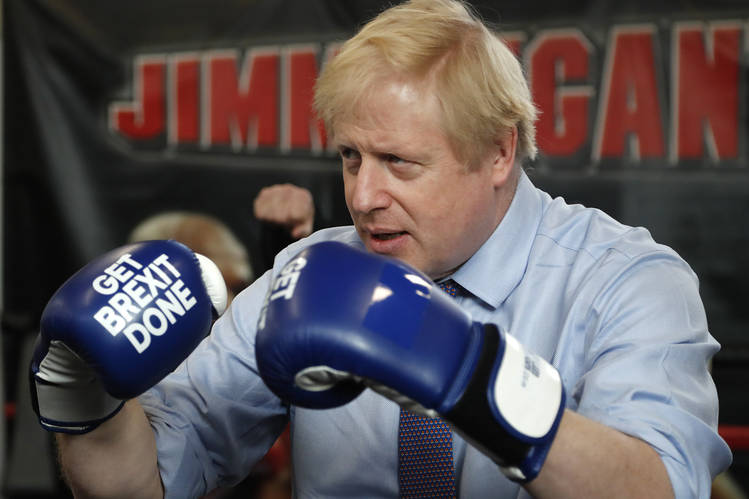 Wars end when the belligerents give up fighting. The surest way for this to happen, and sometimes the least destructive, is through a decisive battle that leads to unconditional surrender.

Boris Johnson’s overwhelming victory in the United Kingdom’s general election this month was such a battle. With the opposition parties completely routed, Johnson now enjoys the unlimited power bestowed on British prime ministers with large majorities.

Britain’s unwritten constitution dispenses with the checks and balances in other national constitutions, allowing an absolute sovereignty to the majority in Parliament often described as “elective dictatorship”.

Johnson’s reputation for recklessness makes this a frightening prospect, but history suggests that elective dictatorship has one important redeeming feature. The concentration of power means concentration of responsibility.

With parliamentary opposition now irrelevant, Johnson will have to confront a more powerful opponent: economic and social reality. Johnson will now have to reconcile his many contradictory promises and inconsistent policies — and he will be personally blamed if he cannot make two plus two equal five.

With Brexit now set to take effect on January 31, 2020, the most important challenge Johnson faces is negotiating the UK’s new relationship with the European Union. The outcome will determine whether Johnson succeeds or fails as prime minister, and the process got off to a bad start three days after the election, when he vowed to enact a law ruling out any extension of the post-Brexit transition period beyond December 2020.

This would require completing the negotiations within a totally impracticable 12-month deadline.

Johnson’s announcement caused near-panic in financial markets, with the pound rapidly losing all its gains from Johnson’s election. This reaction was understandable, since Johnson’s unrealistic deadline will prolong the debilitating uncertainty that has blighted Britain’s economy this year.

But what if Johnson’s rigid 12-month deadline is just a bluff? Johnson’s career has never suffered from broken promises, and his parliamentary majority means that he can repeal his negotiating deadline as easily as he enshrines it in law.

The key question, therefore, is not how Johnson says he will conduct the EU negotiations; it is what negotiating tactics will be in Johnson’s interests to employ. He has strong incentives to make the negotiations with Europe as non-controversial as possible if he wants to achieve his economic, political, regional, and national goals.

First comes economics. Johnson’s government programme depends entirely on a strong recovery in business investment and consumer confidence to provide the additional tax revenues he will need to finance his promises of higher public spending.

To convert his electioneering success into policymaking credibility, Johnson needs to prove that his “fantastic Brexit deal” really was in Britain’s economic interests — and to do that he must avoid any abrupt rupture in UK-EU economic relations.

Any revival of last summer’s panic about a breakdown in EU negotiations would prolong this year’s investment slump and might confront Johnson with the threat of a financial crisis before he can deliver any policy successes.

One possible rationale behind Johnson’s 12-month deadline may be to encourage a step-by-step approach: non-contentious issues, such as tariff-free trade in manufactures, would be agreed first, allowing more difficult negotiations on financial services, agriculture, and fishing to be deferred to 2021 and beyond.

There is also a political imperative for avoiding confrontational EU negotiations. Johnson won the election with the slogan, “Get Brexit Done”. To most voters, this meant that Johnson and other politicians would stop talking about Europe and concentrate instead on everyday domestic issues such as health, crime, and transport.

A year of headlines and parliamentary debates dominated by EU negotiations would be a political disaster for Johnson. This is another reason why he may want to settle easy issues such as tariffs within his 12-month deadline while trying to delay politically controversial decisions on service industries, regulation, and immigration.

Then there is regional politics. Johnson’s landslide victory was due mainly to former Labour voters in manufacturing regions whose factories are highly dependent on trade with Europe. To jeopardize these regional economies by risking a breakdown in EU trade relations would be politically suicidal.

On the other hand, Britain’s manufacturing regions would welcome the high standards of social and employment protection demanded by the EU as a condition for frictionless trade.

Finally, and perhaps most important for Johnson’s place in history, is the UK’s survival as a unitary state. This month’s electoral landslide for Johnson’s Conservative Party was matched by equally impressive victories in Scotland for the Scottish National Party and the weakening of pro-British Unionist parties in Northern Ireland.

If the UK continues to experience weak economic performance next year or faces any kind of financial crisis that could plausibly be blamed on Brexit, the next Scottish parliamentary election, due in May 2021, will probably produce an overwhelming mandate for the separatists.

A referendum on Scottish independence might then be impossible for Johnson to resist because British public opinion is quite sympathetic to Scottish separatism — and would certainly not tolerate a Catalonia-style confrontation.

To protect himself from a rise of Scottish separatism, which would certainly be echoed in Northern Ireland, Johnson needs to avoid any possibility of a Brexit-related economic setback or financial crisis. The best way to do this will be to keep the negotiations on Britain’s long-term relationship with Europe out of the headlines by making them as tedious and non-controversial as possible — and to delay the most difficult decisions as long as he can.

Anatole Kaletsky is chief economist and co-chair of Gavekal Dragonomics. A former columnist at the Times of London, the International New York Times and the Financial Times, he is the author of Capitalism 4.0: The Birth of a New Economy in the Aftermath of Crisis, which anticipated many of the post-crisis transformations of the global economy.