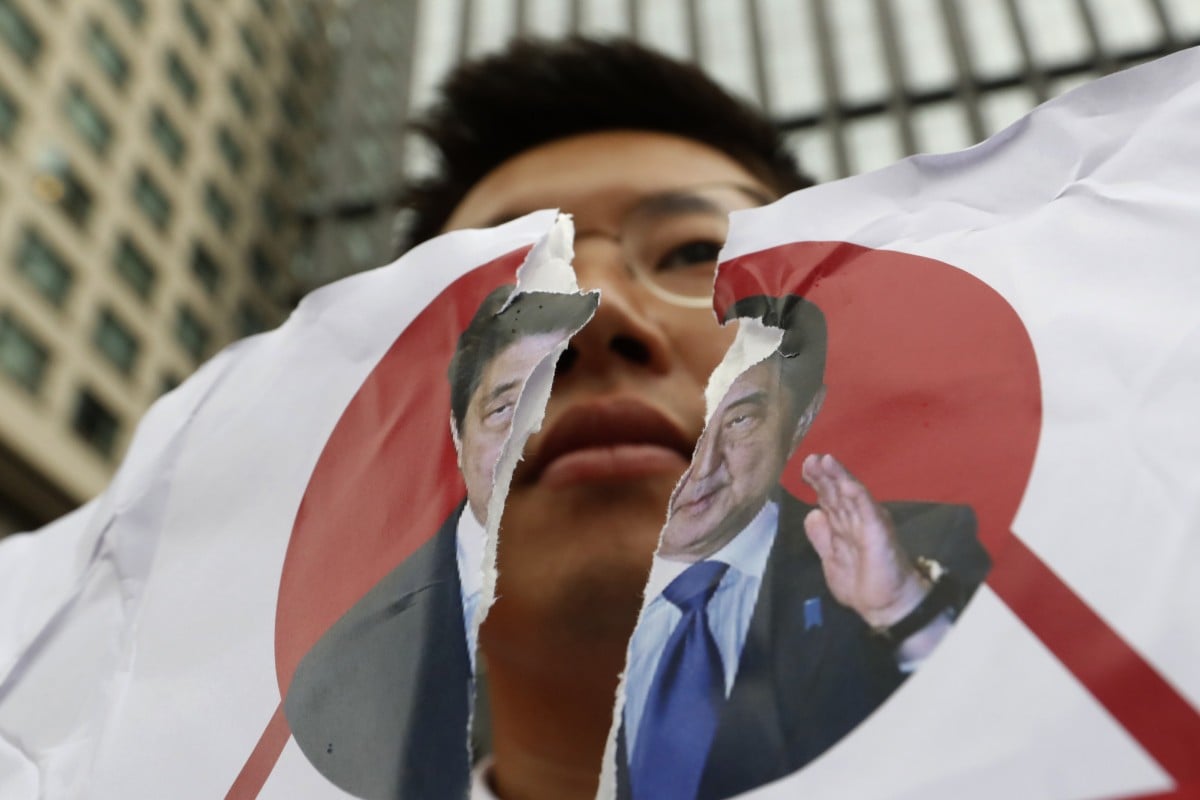 A protester in Seoul holds a defaced image of Japanese Prime Minister Shinzo Abe during a rally denouncing the Japanese government on July 17. Photo: AP

South Korea is the only Asian state to expropriate Japanese company assets to compensate wartime labourers, or allow statues of the “comfort women” and other colonial-era victims on streets facing Japanese diplomatic installations, contravening the 1961 and 1963 Vienna Conventions. The Moon administration also unilaterally dissolved the “comfort women” foundation, negating the 2015 accord signed by the Park Geun-hye government, after Tokyo paid 1 billion yen (more than US$9.2 million) compensation. 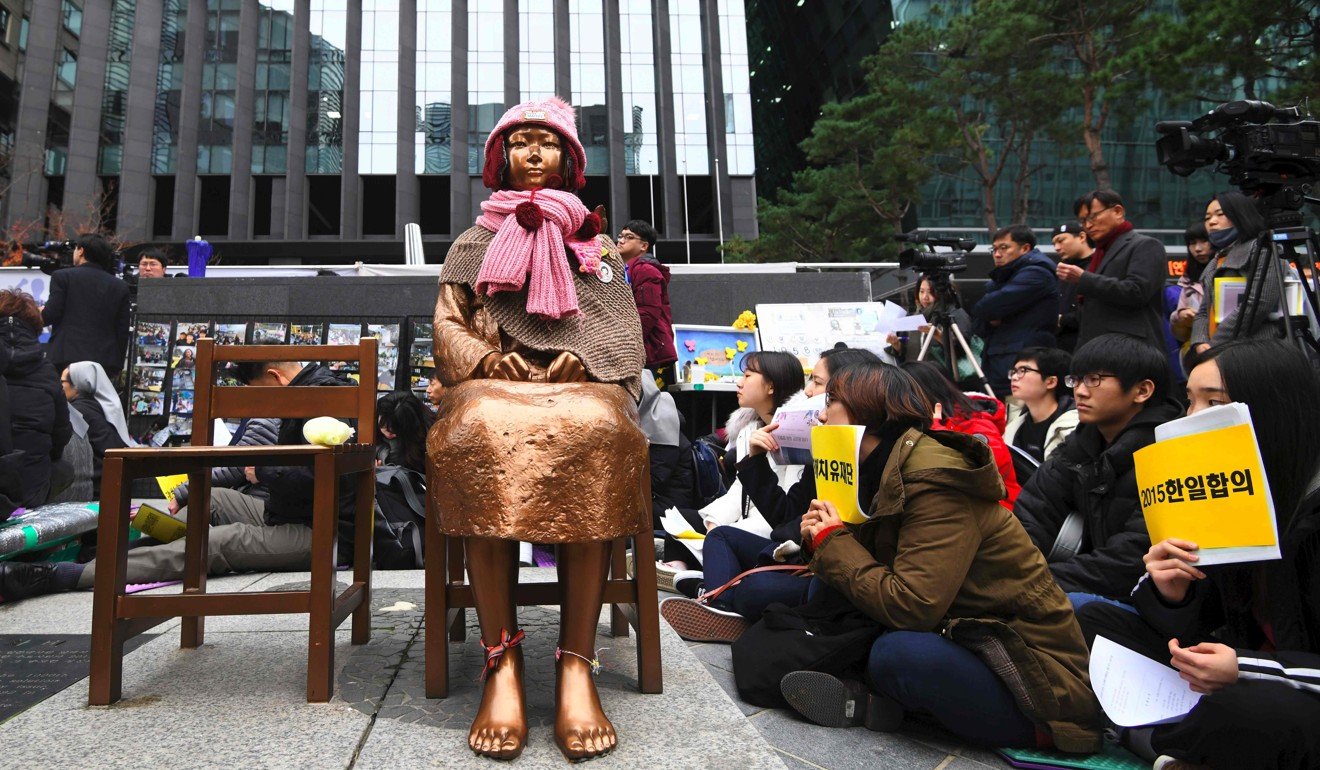 South Korean protesters sit near a statue of a girl symbolizing former “comfort women” forced into sexual slavery, at a demonstration in front of the Japanese embassy in Seoul in November 2018. Photo: AFP

Far-right politicians and media have long advocated that Japan retaliate forcefully. Their views have now reached the mainstream. The center-left Asahi newspaper has criticized the Abe administration for violating free trade norms but joined other mainstream media in panning the Moon administration’s handling of the wartime labour issue. No mainstream Japanese media defended Moon, and the Keidanren (Japan Business Federation) has not protested the new restrictions. In late July, 71 percent of the Japanese public supported stricter export controls.

For both Korea’s left and Japan’s right, these government actions are overdue expressions of popular will. However, a truly healthy liberal democracy would combine freedom of expression with open, informed, balanced public discourse. As Seoul defends comfort women statues and other anti-Japanese expressions, it censors critics who question victims’ narratives. For instance, after a Sunchon National University professor told his class that some Koreans probably volunteered as comfort women, the university terminated his employment and a court sentenced him to six months’ imprisonment 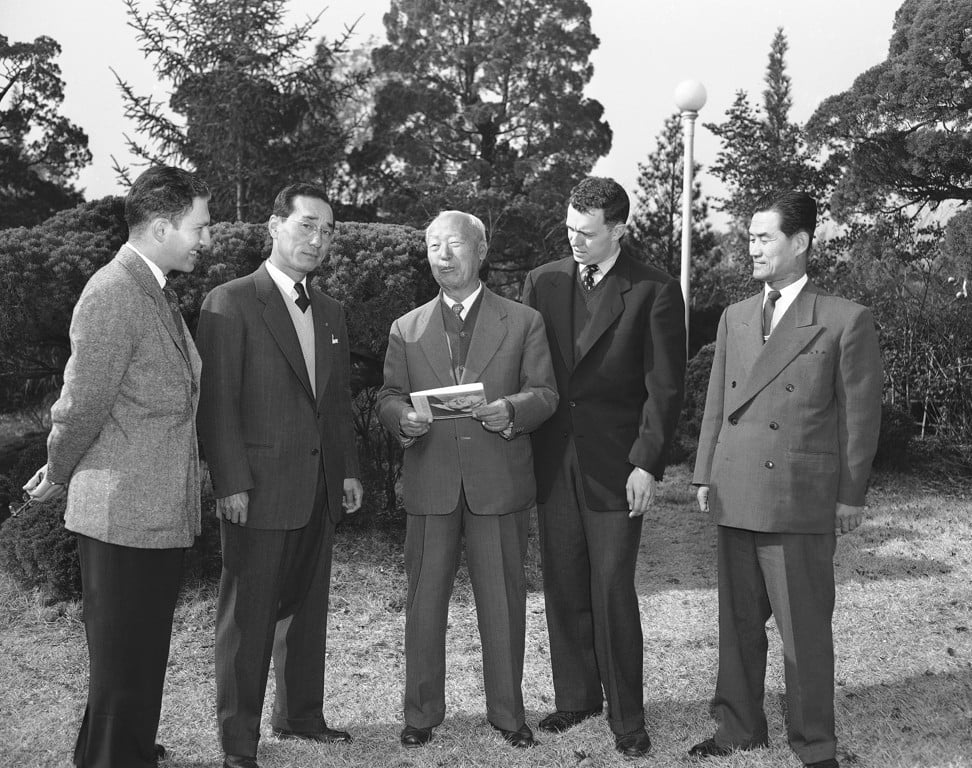 Syngman Rhee (centre), the first president of South Korea, talks with staff of the Associated Press, Korea Pacific Press and the South Korean Office of Public Information in January 1955. Rhee’s government heavily censored the domestic press, shaping opinions on matters such as North Korea and Japan and setting a precedent for governments to follow. Photo: AP

The Korean left has amplified the anti-Japanese narrative. They claim the Japanese military abducted and sexually enslaved 200,000 Korean women and girls; left-wing governments have censored and successfully sought fines and/or imprisonment for academics who argue otherwise.

Seoul’s censorship follows an unfortunate trend in Western democracies, where protections and reparations for historically victimized groups have morphed into prohibitions against any speech considered hostile to their victim status. This government and societal management of discourse forbids “hate speech”, undermining classical liberal rights and informed public deliberation. In Korea, it enables an ideologically driven anti-Japanese narrative to go unchallenged.

If Koreans were more aware of, even if not fully persuaded by, scholarship arguing that comfort women and labourers were generally neither abducted by government officials nor treated as badly as activists claim, they may be less inclined to renege on past treaties and more willing to pursue arbitration.

They may address related, unresolved claims by other “victimized” groups, including the much larger number of women who “comforted” US military personnel in South Korea post-1945, the victims of Korean troops in Vietnam, plus the tens of thousands of North Korean women in Chinese sex trafficking. They may be more to open to recognizing Korean human rights violations before Japan’s colonial regime (by the Joseon monarchy) and after (by the regimes of North Korea’s Kim Il-sung and South Korea’s Rhee). Suppressed speech allows Korean governments and nationalists to divert attention from such issues by perpetuating focus on Japan.

Discourse has been unbalanced for so long that Japan’s export controls shocked Korea’s political class, leading them to turn to Washington, not Tokyo, for a solution. Seoul and Tokyo should not rely on outside parties, but directly negotiate. The two parties may negotiate a formal supplement to the 1965 treaty, itemizing outstanding issues. Despite Tokyo’s position on the 1965 treaty, it has compromised before with the 1994 Asian Women’s Fund and the 2015 comfort women accord. An agreement between the conservative nationalist Abe and left-leaning nationalist Moon would bode well for the settlement’s durability.

But this remains improbable, and any agreement vulnerable to domestic backtracking, unless the Korean state and media stop censoring discourse about these issues and Japan avoids ideological and nationalist suppression of debate.

The worst outcome would be for South Korea to escalate the crisis by decoupling from Japan militarily (e.g. terminating the 2016 General Security of Military Information Agreement), and economically (e.g. boycotting Japanese products).

Korea and Japan are the only democratic countries in Northeast Asia and have become essential economic partners and military allies facing illiberal neighbours. Both states can learn from their illiberal pasts, and actively support human rights, free speech and academic freedom in all of East Asia.

Joseph Yi is an associate professor of political science at Hanyang University. Joe Phillips is an associate professor in the Justice & Civil Leadership Programme, Underwood International College, Yonsei University, Seoul, Korea. Wondong Lee (lwondong@uci.edu), a Ph.D. student in political science at the University of California, Irvine and affiliated with the UCI Centre for Critical Korean Studies, also contributed to this article.