A new rule issued by the White House effectively prevents Latin Americans from claiming asylum at the southern border. 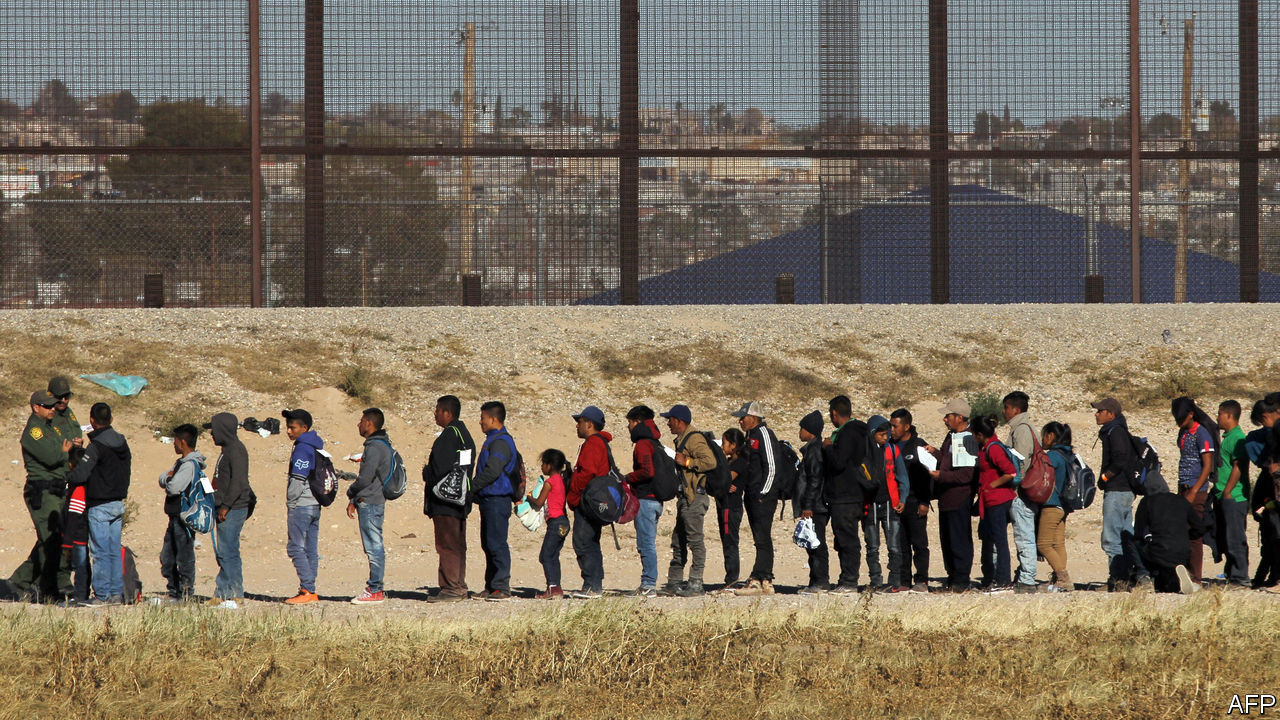 COUNT THE ways in which the government under President Donald Trump has grown more hostile to foreigners who seek sanctuary. For years America led the world, resettling more persecuted people as refugees than any other country. During the Cold War, especially, welcoming asylum seekers from countries under Soviet oppression sent a message that American democracy was more self-confident and open than any rival political system. Few arrived at a land border; most were processed by officials overseas: for example, the “boat people” who fled war in Vietnam, were processed in South East Asia and transferred as refugees to America in the 1970s. More recently Somalis fleeing conflict in the Horn of Africa, or victims of persecution in the Middle East found homes in America.

Mr. Trump has already dramatically cut how many are resettled in this way. Last fiscal year just 22,500 refugees were resettled in America (Canada now accepts more). That was down from 110,000 who were expected (by Barack Obama’s administration) for fiscal 2017. Yet as the number of resettled refugees fell, and amid efforts to deter and deport unauthorized immigrants, there was a surge in asylum applications at America’s southern border. Most were people fleeing Central America, notably El Salvador, Honduras, and Guatemala. Many say, plausibly, that they are escaping widespread criminal violence and the threat of abduction or murder by gangs. In practice, distinguishing between such cases and plain economic migrants is hard.

Relatively few have been processed, so as a big backlog has built up, thousands of people have been stranded in northern Mexico, where applications for asylum are considered. That has added to a widespread impression of a crisis at the border. Mr. Trump responded this week with a new interim order, one issued without congressional approval. Under this, a person who crosses through a third country—for example, a Guatemalan who passes through Mexico en route to America—may no longer seek asylum. The new rule insists that an individual must have sought asylum in that third country, and been rejected, before moving on to try for sanctuary in America. It will apply to unaccompanied children, as well as adults.

Only three exceptions to the new rule are allowed. It will not apply to victims of trafficking, to the tiny numbers of people who seek to reach America by sea, or to those who arrive in the United States having only passed through countries that have not signed the UN refugee convention or the convention against torture, such as North Korea.

The UNHCR, the UN’s refugee agency, has said it is “deeply concerned” by the interim rule. It might well be. The UN’s refugee convention allows for refugees to pass through third countries—think of Vietnamese boat people who initially went to Thailand or other parts of Asia—before lodging an asylum appeal elsewhere. Remove that principle and the effect is to tell the (mostly poor) countries next door to war-torn or violent ones that only they, and not rich ones, have a duty to help refugees. The governments of Central America will not go along with this. Mexico’s government has rejected the proposal as “severe” and “not the best way forward”. A court in Guatemala has prevented that country from agreeing to act as a “safe third country” to which America can deport asylum-seekers.

The American Civil Liberties Union has said the rule, which takes force on July 16th, is “patently unlawful” and it will sue to scrap it. Democrats, too, are opposed. Mr. Trump may be calculating that a dust-up over this issue will help him politically, even if he loses. If a court or Congress were to overturn the rule, that could energize his nativist base: 73% of those who voted for Mr. Trump in 2016 “strongly approve” of his handling of immigration; only 4% “strongly disapprove” and most of the remainder are supportive. On the campaign trail next year, he will doubtless tell voters that only he can be trusted to keep outsiders from gaming the immigration system.

The Migration Policy Institute (MPI), a think-tank in Washington, notes that Mr. Trump’s new policy is similar to one that Europeans have long pursued. In Norway, for example, anyone arriving at its border after first passing through neighboring Russia (as some Syrians did in 2015) is denied asylum because Russia has been declared a safe third country for refugees. Similarly, the Dublin convention in Europe insists that those seeking asylum within the EU must apply in their first country of arrival—a rule that (if properly applied) would place most of the burden of processing them in countries with a Mediterranean coastline, such as Italy and Greece, and hardly any on northern countries. On an even larger scale, European countries give large amounts of foreign aid to the third countries through which refugees typically pass, such as Turkey and Libya, so that those countries will stop the refugees from crossing the Mediterranean. Australia, too, has paid for third countries in the Pacific to host asylum seekers who had tried to get down under.

The lessons from these international examples are complicated, says the MPI. It is not clear that safe third-country agreements are implemented effectively—few asylum-seekers actually get returned from EU countries to Turkey, for example. And if the real point of such deals were to deter asylum seekers from making journeys in the first place, then it is not obvious that it works. Unless the third countries use rather brutal force to detain asylum seekers, as Turkey and Libya do, then the flow of people tends to continue. Big payments, in the form of billions of dollars in foreign aid, are essential for buying co-operation from countries (or even warlords) who operate at a distance from Europe’s borders, clamping down on asylum seekers out of sight of European eyes. For the safe third country system to work, in other words, it seems to need willing and rather authoritarian partners who will lock up asylum seekers or otherwise prevent their movement. The proposed solution to the increase in asylum seekers thus relies on the very thing the system was originally intended to undermine.