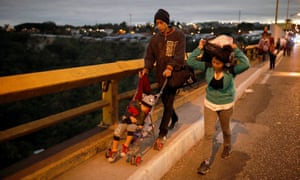 Migrants from Honduras head north through Guatemala in January 2019. The difficulty and danger of the journey to the US is a factor in a rise in Latin American migrants heading for Europe. Photograph: Stringer/Reuters

Venezuelans are behind only Syrians in terms of asylum applications in Europe while those from Central Americans are up 4,000% in a decade.

In contrast to many congregations in western Europe, attendance is on the up at Notre-Dame aux Riches Claires, an imposing baroque red-brick church on a cobbled road close to Brussels’ Grand Place.

The faithful squeeze into the pews for Sunday mass and spill out on to the road to catch up before and after the weekly Spanish-language service by Father Óscar Escobar.

The 17th-century church’s change in fortunes is not just down to the strength of the Colombian priest’s sermons, or the healthy trade in community gossip and empanadas afterward.

It is on the frontline of a dash to Europe by Latin Americans, as growing numbers of migrants reject the mortal risks now inherent in trying to secure a new life in the USA.

The European Asylum Support Office reported this month that an 11% increase in people seeking political asylum in Europe since last year is being driven by people fleeing economic disasters, political repression and criminal violence in Venezuela, El Salvador, Colombia, Honduras, Nicaragua, and Peru.

Venezuelans have lodged some 18,400 asylum applications from January to May, roughly twice as many as during the same period in 2018, making them the nationality with the second-highest number of applications in Europe after Syrians.

Meanwhile, applications for refugee status by Central Americans have increased 4,000% compared with a decade ago.

The trend to head across the ocean to Europe is in part a reaction to the pitiless approach of Donald Trump’s White House, whose aggressive immigration policies have separated families at the border and drastically curtailed asylum and refugee resettlement.

The dangers of attempting to reach the US through Mexico were brought home by the photograph of Óscar Alberto Martínez Ramírez and his 23-month-old daughter, Angie Valeria, who drowned trying to cross into Texas.

Many Latin American migrants are judging it better to buy a plane ticket and face the bureaucracy of the European immigration authorities rather than risk the cruelty of the people smugglers and the apparent indifference of the US administration.

Others describe a greater tolerance in Europe for Latin Americans who want to live out what was once called the American dream.

The Trump administration has refused to grant protected status to people fleeing Venezuela’s political and economic meltdown, but there is no visa requirement for Venezuelans coming to the EU’s Schengen area.

Spain remains the prime European destination for Latin Americans. Figures from the Spanish asylum and refugee office – part of the country’s interior ministry – show that asylum applications from Central America have more than tripled over the past two years as people flee violence, unemployment, corruption, crime and the impacts of climate change.

Julián, (not his real name), was driven out of his native El Salvador after being persecuted because of his sexual orientation. He tried to enter the US eight years ago and spent a year there trying to apply for asylum. When he failed to come up with the $25,000 bond needed, he was deported.

After moving back to a different city in his home country, he eventually decided to come to Spain where his siblings live. 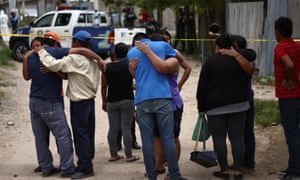 Relatives and friends react at a crime scene after a man was killed, in Tegucigalpa, Honduras. Violence in Central America is a major driver of migration. Photograph: Edgard Garrido/Reuters

“I’m applying for asylum at the moment and will probably have to wait another eight months before I find out whether my application has been approved,” he said.

But each European immigration system is different. And Spain is not the easiest to traverse.

When confronted with long, difficult and unpredictable situations – such as the current crisis in Nicaragua – the Spanish authorities tend to adopt a watching brief, said Paloma Favieres, director of policy and campaigns at the Spanish Refugee Aid Commission (Cear).

Spain also has a hefty backlog and usually turns down asylum requests from those alleging persecution by the armed drug gangs known as maras – because the perpetrators are not state actors.

Belgium, in contrast, recognizes gang violence as a reason for granting refuge and is known for a comprehensive system of support for people in search of international protection.

Those applying for asylum receive housing, food, medical follow-up, legal assistance, help with learning one of the three official languages ​​of the country and the right to social support, said Susana Parraga, a social worker with Caritas International in Belgium.

Belgium is now third behind Spain and Italy as the most popular European country for Salvadorans.

They are in Belgium’s top 10 of the highest number of asylum applicants in 2019, with 343 applications. And of the 95 decisions made this year, 93 were positive.

In 2017, all Venezuelan requests for refugee status were recognized, dropping slightly to 86% in the period January to October 2018. Some 411 Venezuelans applied for refugee status in 2018, generally, in Parraga’s experience, individuals with a high level of education.

“The lack of knowledge of French or Dutch is an obstacle, although they learn quickly and the conditions of reception and the opportunity to quickly integrate into the labor market are very much appreciated by Venezuelans,” she said.

Luis, 29, from Maturín, in Aragua de Maturín, Venezuela, was granted refugee status in Belgium in February this year after leaving university in Caracas in the light of the kidnapping of his brother-in-law and the deteriorating economic situation.

“There is no hope for the future in Venezuela,” he said. “There are no jobs, no food. And it is dangerous. The most powerful reason I left was the homophobia, my life there was in danger.”

Luis, not his real name, lives in Flanders now and works in a call center, using his French, Spanish, Dutch and English. He can see a future. “America is completely full of Venezuelans,” he said. “So, people won’t find chances there. Belgium accepts people, it has its doors open to everybody. Here there are chances.”