After months of battling wildfires that scorched thousands of homes and created mass evacuations in eastern Australia, officials announced Thursday that all the blazes in the New South Wales state are considered contained after recent rains.

New South Wales Rural Fire Service‘s deputy commissioner Rob Rogers said in a video posted Twitter that while there is still some fire activity in the southern part of the state, emergency workers can now focus on “helping people rebuild.”

“After what’s been a truly devastating fire season for both firefighters and residents, who’ve suffered so much this season, all fires are now contained in New South Wales,” Rogers said.

Rogers said all fires are contained, meaning that a perimeter has been established around the blazes to prevent additional spread.

In what has been a very traumatic, exhausting and anxious bush fire season so far, for the first time this season all bush and grass fires in NSW are now contained.
It has taken a lot of work by firefighters, emergency services and communities to get to this point. #nswrfs

The fire service said while “substantial rain” has recently fallen in some areas, firefighters continue to work on 24 bush and grass fires.

NSW RFS@NSWRFS
Although we have seen substantial rain in some areas, firefighters continue to work on 24 bush and grass fires. 2 fires remain uncontained, located in the Snowy Valley and Monaro areas. The main focus now for crews is to locate and extinguish any remaining hotspots. #nswrfs 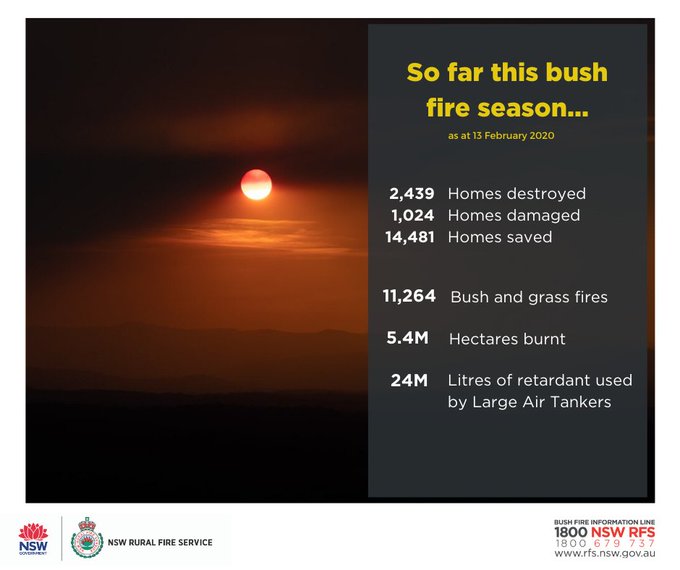 “The main focus now for crews is to locate and extinguish any remaining hotspots,” RFS said.

In all, Australia’s wildfires killed at least 33 people and destroyed more than 3,000 homes. The fires began causing widespread destruction toward the end of 2019, which was both the hottest and driest year in Australia’s recorded history, according to the Bureau of Meteorology.

During the deluge over recent days, coastal areas have experienced some of the heaviest rainfalls, which has caused flash flooding in some places.

Sydney, the central coast and the Blue Mountains received up to 16 inches since last Friday, representing some of the heaviest falls in decades.