If not for the coronavirus outbreak and the US Democratic primaries, the latest phase of the Syrian war would have been the first item on international news bulletins. What with Turkish President Recep Tayyip Erdogan warning Syria that Turkey will strike Syrian government forces “anywhere” if one more Turkish soldier is hurt, the war is threatening to go region-wide.

The latest escalation started when Syria backed by Russian air support earlier this month launched an offensive to take control of Idlib and declare the final victory. Its earlier attempts to take the province and finish the war were stalled under Turkish protests.  But this time, Syria appears to be determined.  In the Syrian attacks, already more than a dozen Turkish soldiers manning military outposts in Idlib have perished.  Turkey was furious with both Syria and Russia.

As the crisis escalated, the United States sent a special envoy to Ankara in an apparent attempt to drag Turkey away from Russia.  Also visiting Ankara at the same time was a Russian delegation but Turkey stood its ground and insisted on a Syrian withdrawal from Idlib – a demand Russia was not willing to take to its Syrian ally.
As the escalation threatens to spark a confrontation between Russia and Turkey, Erdogan told Parliament on Wednesday that Turkey was determined to push the Syrian troops beyond Turkish observation posts by the end of February. “We will do this by any means necessary, by air or ground,” he warned.

The warning underscores the hyper volatility of the Middle East. No region in the world has seen so many wars for so long a period.

The United Nations has miserably failed to bring about at least a temporary ceasefire to any of the conflicts raging in the Middle East, though in the preamble to its charter the world body proclaims it was set up to save succeeding generations from the scourge of war. 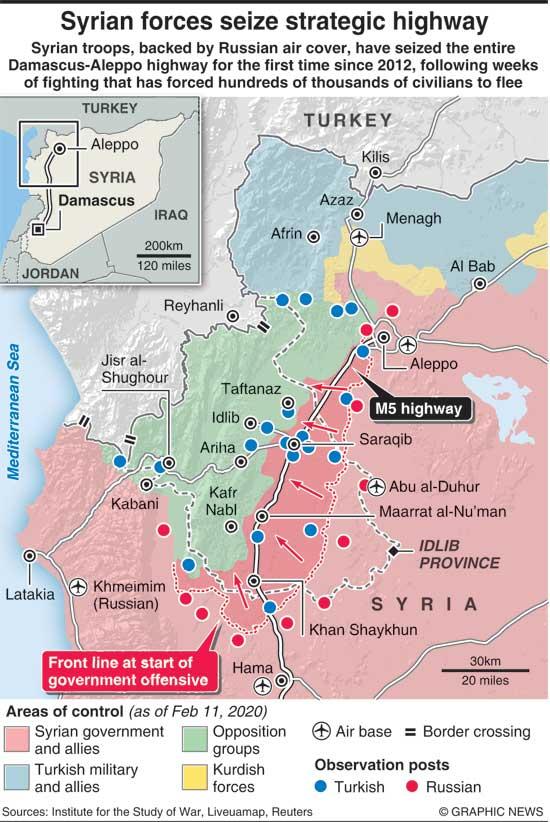 Paradoxically, Syria is the antithesis of the United Nations. More than a dozen countries directly and scores of others indirectly are present in this conflict.

The US claims it came to Syria to fight ISIS, but it seems to be in league with ISIS because they both want the Syrian regime toppled.

There is conflict and there is cooperation, at least, tacitly.
Nowhere does the aphorism ‘one’s terrorist is another’s freedom fighter’ make more sense than in Syria. In the fight against ISIS, the US has partnered with Syrian Kurds whom Washington’s Nato ally Turkey condemns as terrorists.

The conflict in Syria was not fully homegrown. It was largely foreign made. It erupted in the backdrop of Arab Spring protests that gave false hope to the region’s people that they would soon be empowered by democracy. But the rich and politically influential Gulf nations made use of the Arab Spring agitations to achieve their own foreign policy goals. In a violent overthrow, they ousted Libya’s Muammar Gaddafi.  They wanted to repeat the regime change formula in Syria also but got stumped.

These outside forces wanted to achieve their geopolitical and geo-economic goals even if it led to hundreds of thousands of deaths, millions of displacements and untold human suffering. All they wanted was to check Iran and deny it a contiguous land mobility through Syria all the way to South Lebanon where the powerful Iranian-backed Hizbollah militia hold sway.  They were also interested in a pipeline project across Syria for them to send their oil and gas to the European market, dominated by Russia with a 60 percent market share.

By arming and financing the Syrian rebellion and covertly supporting ISIS and al-Qaeda groups, the Gulf nations and the West almost succeeded in toppling the Assad regime, but Russia’s entry and the intervention of Iran together with Hezbollah changed the war’s course in Assad’s favor.

To this crowded space, also sending troops was the US, ostensibly to fight ISIS, but its adventure almost set off a major confrontation with Russia when in a four-hour battle in May 2018, US forces killed more than 100 Russian paramilitary forces.

Russia was angry but was prudent enough not to let the crisis escalate into an all-out war between the world’s top two nuclear powers. Another major incident where Russia exercised constraint was when Turkey shot down a Russian military plane. Russia’s diplomacy paid off. Turkey, which hosts some 3.5 million Syrian refugees and supports the Syrian rebel group Free Syrian Army (FS), became Russia’s partner in Syria. So much so, Turkey was seen drifting away from the US orbit.

The US-Turkey relations soured when Turkey suspected it had a role in the 2016 botched military coup and later when the US in the fight against the ISIS joined hands with Syrian Kurds, whom Turkey regards as terrorists. Last year Turkey, defying US objections, bought S400 missiles from Russia.

The Turkey-Russia partnership is now falling apart. One is insisting that the other fulfills its part of the Sochi deal, according to which, Turkey is allowed to set up military outposts in the Idlib de-escalation zone but with Syria’s permission, while Turkey will ensure that the rebels are neutralized.

Russia accuses Turkey of not fulfilling its part of the deal and aggravating the crisis by arbitrarily setting up a buffer zone along the border with Syria.

These developments, together with Syria’s latest military gains which have enabled it to take control of a major highway connecting Damascus and Aleppo, have killed the Sochi agreement and the Astana process whereby Russia sought to bring the Syrian conflict’s stakeholders to the peace table.

A new regional conflict is escalating fast, with Turkey sending in more troops to Syria while Russia and Syria are determined to wipe out the rebels from their last stronghold.  Can diplomacy prevent the coming conflict?