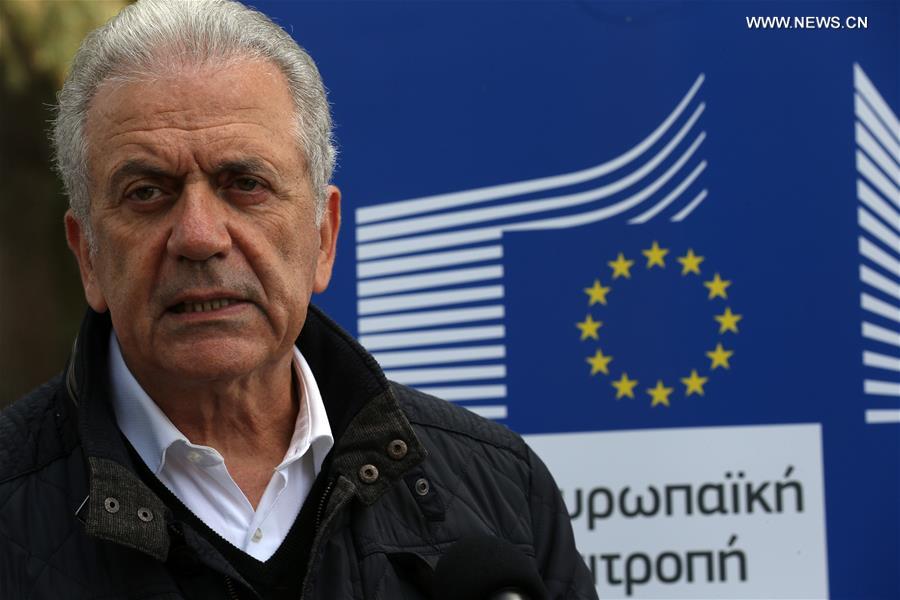 ATHENS– The European Union (EU) will continue supporting Greece, Italy and other countries which are at the forefront of the refugee challenge, visiting EU Commissioner for Migration, Home Affairs and Citizenship Dimitris Avramopoulos said on Thursday.

“The challenges that Greece is confronted with are our common EU challenges. The Commission stands ready to continue supporting Greece… The EU must continue to show solidarity both to Greece and Italy,” he said during a visit at the refugee camp of Ritsona, about 86 km north of Athens.

The camp, created two years ago at the peak of the refugee crisis and currently hosting about 650 refugees, is considered as a model reception facility where families are no longer housed in tents but prefabricated houses.

“We are not where we were three years ago. The situation has changed. Much progress has been achieved but it is not time to slow down,” Avramopoulos said during statements broadcast on Greek national broadcaster ERT.

Over one million refugees and migrants reached Greece from Turkish shores since 2015 to escape warzones and extreme poverty.

More than 60,000 refugees and migrants have been stranded in Greece since the closure of the borders along the Balkan route to central Europe in February 2016 and the launch of the EU-Turkey agreement aimed to stem the flows via the Aegean Sea.

Living conditions at the dozens of camps and other facilities across Greece have improved, according to local authorities and EU officials, but challenges remain in the hotspots of the Northern Aegean Sea islands which still receive dozens of new arrivals each day.

Within the past three weeks the average number of people landing on Greek shores has doubled to about 120 per day, said Greek Migration Policy Minister Dimitris Vitsas.

Vitsas accompanied Avramopoulos during his tour at Ritsona and the nearby town of Livadeia where refugee families are hosted in houses under an accommodation program funded by the EU.

Some 1.5 billion euros (1.85 billion U.S. dollars) have been made available to Greece since the start of the crisis, the EU Commissioner noted.

“The EU-Turkey statement still holds and delivers, but the migratory situation remains unfortunately volatile. We remain vigilant. It is therefore necessary to speed up the implementation of the EU-Turkey agreement in order to accelerate returns to Turkey,” Avramopoulos underlined.

Under the EU-Turkey agreement all new arrivals to Greece after March 2016 should be returned to Turkey should they not qualify for asylum.

However, the asylum procedure in Greece takes long and in many cases people live in camps awaiting the verdict on their asylum bids for two years, Avramopoulos and Vitsas acknowledged.

A total of 1,590 refugees and migrants have been sent back to Turkey under the EU-Turkey statement since 2016, according to the latest official data provided by the Greek Police on Thursday.

“The Greek government considers as its humanitarian obligation, a European and national obligation, to continue providing aid to asylum seekers. Of course the best solution would be to see these people returning to their homelands or continue on the road they wish to take, but we are far away from this stage at the moment,” Vitsas said.

Until this moment comes, European member states must give answers to significant questions which are currently on the table of discussion, he noted.