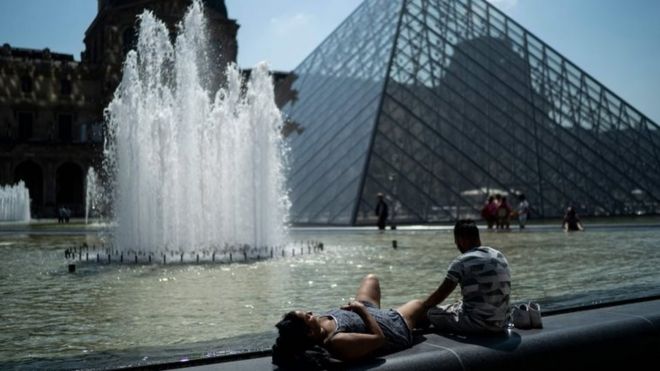 Germany, Poland and the Czech Republic hit their highest ever recorded June temperatures on Wednesday – with more records anticipated to fall as the heat continues to rise in the coming days.

Some nations, including France and Switzerland, are expected to see levels above 40C (104F) on Thursday.

Meteorologists say exceptionally hot air blown in from northern Africa is to blame for the European heatwave.

French officials have issued stark warnings about the risk to life.

On Wednesday, their Minister for Solidarity and Health, Agnès Buzyn, defended the government against claims they are being alarmist about the conditions.

France was traumatized by a heatwave in 2003 which was blamed for 15,000 extra deaths.

Nearly all of the country is now on orange alert – the second-highest warning level after red – with local authorities issuing advice on how to keep cool.

Spanish officials have also warned of a “significant risk” of forest fires in some areas.

How hot will it get?

Temperatures have been climbing in recent days – but are expected to get even hotter in places towards the end of the week.

On Wednesday, Coschen in Brandenburg peaked at 38.6C – a new German record for June.

Parts of France and Switzerland also recorded their local all-time highest temperatures ever.

Even in the high-altitude Alps, temperatures topped 30C in places.

Meteorologists warn the heatwave’s conditions will intensify over the coming days. In parts of northeastern Spain, it may reach 45C on Friday.

Because of the unusually warm weather, some French schools have delayed important exams and even closed to pupils altogether.

Several cities, including Paris and Lyon, have restricted traffic to try and reduce the effects of pollution during the heatwave.

While the UK will avoid the worst heat, parts of the country – including London – are expected to see temperatures top 30C on Saturday.

Is climate change to blame?

Linking a single event to global warming is complicated.

While extreme weather events like heatwaves occur naturally, experts say these will happen more often because of climate change.

Records going back to the late 19th Century show that the average temperature of the Earth’s surface has increased by about one degree since industrialization.

A climatology institute in Potsdam, Germany, says Europe’s five hottest summers since 1500 have all been in the 21st Century.

Scientists are concerned that rapid human-induced warming has serious implications for the stability of the planet’s climate.