A REMAIN voter has demanded Britain “immediately” leaves the European Union as he ridiculed the Labour Party for “ignoring” constituents in the party’s heartlands.

Lee from Cardiff, a self-titled “reluctant Remainer”, said he will now be supporting the Brexit Party because the democratic vote of 17.4 million people should be respected. Speaking to Wales’ Brexit Party MEP James Wells, the Cardiff resident said: “I actually voted to Remain, reluctantly. I had been researching the European Union for a long time and was a reluctant Remainer. When the result came out, I thought ‘fair enough – that is the majority’.

“We should now leave on the terms that Cameron said we would leave.

Lastly, the Remainer” said he would now be supporting the Brexit Party, despite previously being a Labour Party member.

He added: “I’d just like to say that until November 2017 I was a Labour Party member and I am equally dissatisfied with the response from the Labour Party.

“In its heartlands in south Wales, the West Midlands, the northwest and the northeast, the real Labour voters wanted to leave the European Union, and I’m afraid the Labour Party has just ignored its constituents.

“I shall be voting for the Brexit Party.”

The comments come after Brexit Party chairman Richard Tice criticized Theresa May and Tory leadership contenders Boris Johnson and Jeremy Hunt for ignoring his party’s letter outlining plans for a no deal Brexit.

Brexit Party leader Nigel Farage and chairman Richard Tice delivered a letter to Number 10 earlier this month demanding to be brought in as part of the negotiating team for Brexit and no deal preparations.

At the party’s press conference on Monday, Mr. Tice took aim at Theresa May for ignoring the invitation as there were only four months left to go until October 31, the Brexit deadline.

The entrepreneur and MEP also said he had received no word from Tory leadership contest finalists Boris Johnson and Jeremy Hunt over any involvement with no deal preparations.

During the press conference, Mr. Tice said: “It is over two weeks now since we delivered a letter to the current Prime Minister Theresa May asking that we should be allowed in to look at the state of no deal preparations.

“It is pretty shocking that we have had no reply either from the Prime Minister or from any of the candidates.

“When you think there is still another four months to go, are we really inferring that nothing going on. 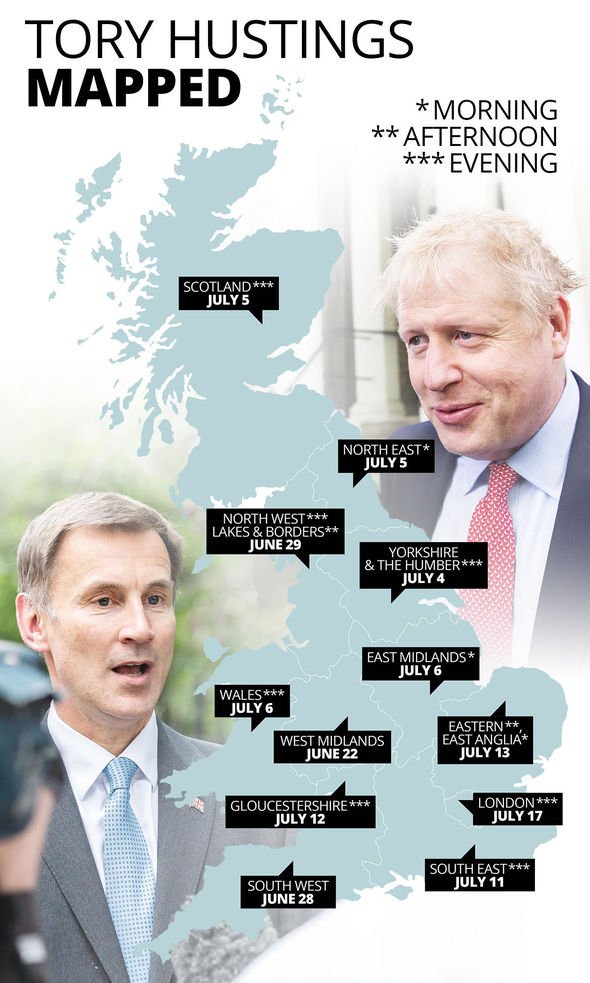 Brexit news: Tory leadership hopefuls to hold a series of hustings up and down the UK (Image: Express.co.uk)

“There is no one better than ourselves and some of our elected MEPs, given that we had a direct democratic mandate to be involved in the negotiations.

“We should be allowed in to look at the state of these preparations so that we know what is going on.

“This way we can give confidence to the people on leaving with a WTO Brexit and that should happen now.”

Mr. Farage has claimed Mr. Johnson has already won the leadership contest but has said he will remain untrusting of the former foreign secretary until he delivers on his promise of delivering Brexit.

Both Foreign Secretary Jeremy Hunt and Mr. Johnson have said they would be prepared to take the UK out of the EU by October 31 with or without a deal.